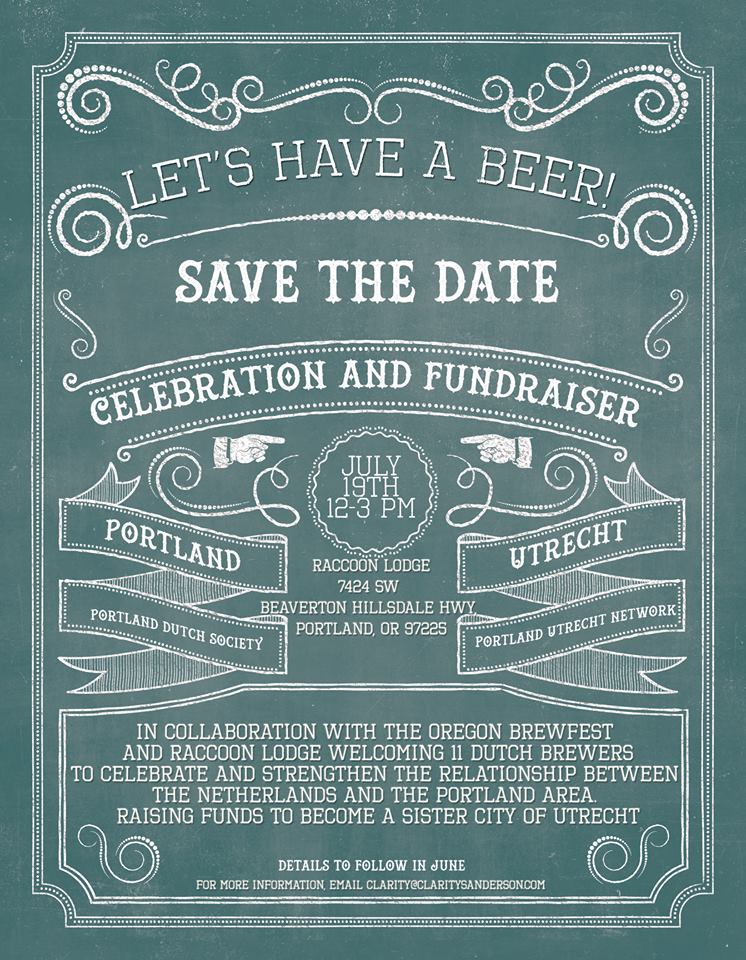 Its hard to believe that today is July 1st and along with this arrival the first day of Oregon Craft Beer Month. We are also just 3 weeks away from the kickoff to the Oregon Brewers Festival that takes place from July 23rd to 27th.

This year OBF organizers are hosting “Bridging Cities: One Beer at a Time” that will highlight 11 Dutch and 1 German craft brewers at this years festival. To help us celebrate their arrival, the Raccoon Lodge & Brew Pub, the Portland Dutch Society and the Portland Utrecht Network are welcoming the guest brewers on Saturday, July 19, from Noon to 3pm at the Raccoon Lodge.

Festivities during the day will include a catered BBQ and beer, with music by Dutch musician Michele Van Kleef and PSU jazz musician. In addition, a silent auction will be held, that will be emceed by Charles de Greef of KBOO’s Holland Hour, featuring beer and merchandise donated by the visiting brewers, as well as contributions from local restaurants and arts organizations.

This one of a kind reception is open to the public. Admission is $25 per adult and $10 for children up to 16 if purchased by July 12 at www.PortlandDutch.com. Space is limited and advance purchase is strongly advised. On July 13, adult ticket prices increase to $30. Proceeds from the event will benefit the Portland Utrecht Network’s efforts to further develop the current “Friendship City” status to a formal “Sister City” relationship, as well as help to fund future cultural exchanges. Numerous connections between the cities are being explored, such as transportation, business, sustainability, design, tourism, and craft brewing.

To learn more about the Bridging Cities reception, the Portland Dutch Society or the Portland Utrecht Network, visit Facebook/PortlandDutch or Facebook/PortlandUtrecht. For more information on the Oregon Brewers Festival, July 23-27, and the visiting brewers who will be serving their beer in a special tent during the festival from 1pm to 3:30pm daily, visit www.oregonbrewfest.com.