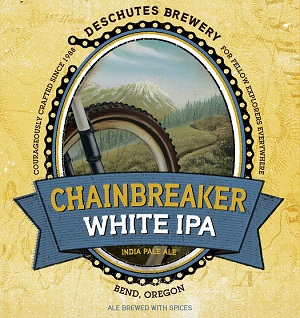 How far are brewing style guidelines to be pushed? Brown Porters, Black IPAs, Strong Pale, and now, after a series of tinkering with various recipes, Deschutes Brewery is unleashing their Chainbreaker White IPA in bottles. You may remember their collaborative Conflux 2 release White IPA release done in conjunction with Boulevard Brewing of Kansas City. This beer, though sharing some similar characteristics, is much different. Slated to be released in late March 2012, Chainbreaker is described by the brewery as a “hop-forward, citrus-packed beer with an unmistakably smooth character” with distribution expanded throughout the 19 states where Deschutes send their goods.

“We’re always experimenting with new ingredients and new styles at the brewery,” said Cam O’Connor, brewmaster for Deschutes. “In the case of Chainbreaker our experimentation really paid off: the marriage of wheat, spices, yeast and hops have all come together to make a very drinkable, complex White IPA.” 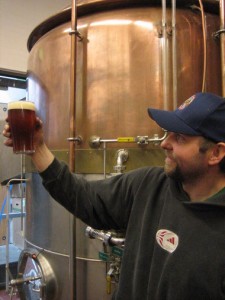 The name Chainbreaker White I.P.A. was inspired in part by a legendary mountain bike race in Central Oregon called the Cascade Chainbreaker. The challenging race features a demanding course with multiple terrains, just as this beer challenges the palate to expand with a fusion of wheat and spice low notes alongside significant hop highs. Sweet orange peel and coriander round out the flavor profile for a refreshing ride.

First introduced at the Deschutes Brewery Bend and Portland pubs, as well as appearing at various special events, Chainbreaker White IPA was so well-received that the team decided to take it to the next level and make it part of the brewery’s year-round line up.

Chainbreaker White I.P.A. will be available in six-packs and twelve-packs in Oregon, Washington, Idaho starting in late March 2012. The beer will continue to roll out to additional states in the brewery’s distribution network later in 2012.

Located in beautiful Bend, Oregon, Deschutes Brewery is in the business of daring people to expect more from their beer. That’s why we started off in 1988, on the banks of the Deschutes River here in Bend, Oregon, by selling Black Butte Porter at a time when others were sure a dark beer would never catch on. Our brewers love to push the envelope, especially if it makes someone nervous.  But for us, the highest praise is a raised glass and a toast of “Bravely Done!”  For more information about Deschutes Brewery and its courageously crafted beers, please visit www.DeschutesBrewery.com or www.Facebook.com/Deschutes.Brewery.