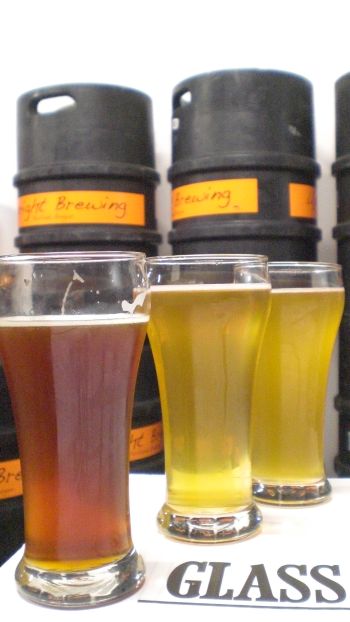 As always here in Beervana, the weekend was chock full of wonderful brews to enjoy. For us, we were lucky to also enjoy said brews with great folks who live and breathe craft beer here at craft brewing’s epicenter.

The weekend sometimes starts on Thursday (heck, sometimes it never really ends), and this past one was such a doosie. 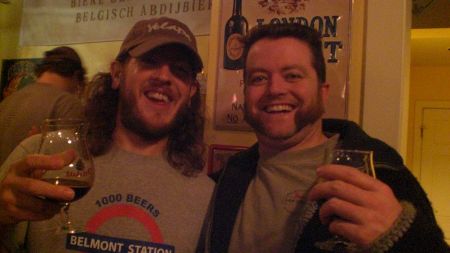 new our liver would be quick to quiver so we hoofed it a few miles to and from Belmont. Of course, hoofing it means, a mini pub crawl…a group of us including Kyle from Double Mountain and Cole from Full Sail hit up the Horse Brass a few blocks away for some pints. Then over to Zack’s Shack, one of Upper Hawthorne’s best stops for quality draught beer options and late night hot dogs. After we had hit our quota for beer (is this possible?) we braved the extremely cold Thursday night chill and walked home. 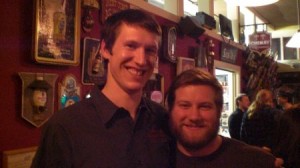 On Friday afternoon, Baker City’s finest brewer (and one of Oregon’s best for that matter), Shawn Kelso visited Portland to deliver some of his grubbin’ kegs of beer to various craft beer hotspots. I met with Shawn for lunch at Hopworks Urban Brewery, and what better place in town to go for a hophead? At HUB, Shawn and I sampled their Secession Cascadian Dark Ale which debuted at last summer’s North American Organic Brewers Festival. The citrusy, roasted session-worthy brew has been getting a lot of notice recently as a new and emerging beer style and it is easy to see why. 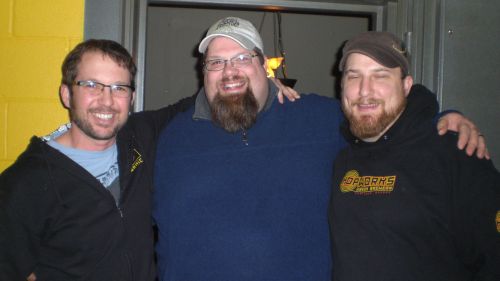 After food and some brews, Shawn and I got the tour from the crew. Christian Ettinger and Ben Love were on hand to geek out on beers with their malt-fermenting Cascadian compatriot. Relatively new at HUB is an

added barrel-aging section beside the brewery where favorites like the Floggin Noggin Barley Wine, Kronan the Barbarian, and Deluxe Organic Ale marinated in the boozy soaked wood. Twelve different beers were pouring including HUB’s award winning IPA and lager.  It was great to see all of these prominent Oregon brewers under one roof and catch up with Shawn. Look for Barley Brown’s Turmoil Cascadian Dark Ale and their Imperial CDA aptly named Chaos at Belmont Station’s CDA Symposium on January 23, 2010. Kelso will be on hand along with other brewers including CDA championer Abram Goldman-Armstrong. It will be another wonderful week long celebration at the Bier Cafe. See you there! 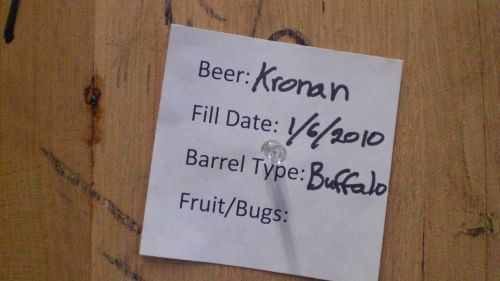 On Friday night, we shared some wonderful beers from our friends Carl and Amy Singmaster of Belmont Station (did I mention that Belmont Station is killer?!) Carl and Amy brought by some wonderful out-of-market brews that were quite intriguing…and we added a few of our own to the equation. It’s always a lot of fun to share prospectively interesting beers with people who really appreciate that sorta thing. Here’s some of the highlights: 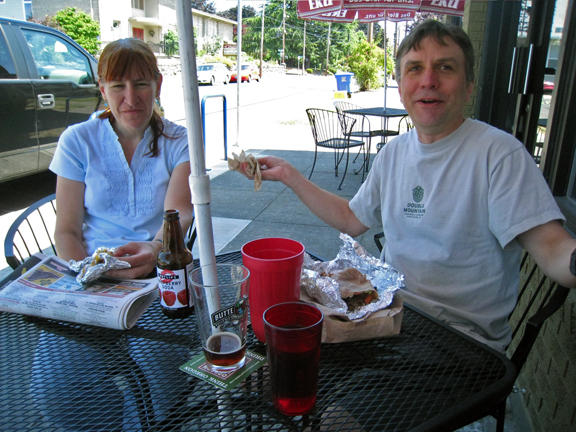 Odell Woodcut No. 02:  The commercial description for this beer calls it “an oak aged golden ale, was brewed over six months ago on the brewery’s pilot brewing system. The golden ale has been aging in virgin oak barrels and will bottle condition in cork finish, 750 ml bottles. Crafted with fine specialty malts and hops, Woodcut No. 2 is a golden copper color. The rich toffee-like malt character is balanced by soft tannins. Freshly cut wood and vanilla bean aromas compliment the beer’s smooth finish.” I really don’t think there’s much more to be said. A thoughtful accurate description, I feel. Sipped from a snifter, this is definitely a keeper. Aged in the bottle one year, this was a highlight for me.

Dark Horse Double Crooked Tree IPA: There’s been a lot of buzz about Dark Horse in recent months. Maybe longer, but I have just caught wind. The Crooked Tree was the hoppy beer of the lot and the one we finished our tasting with, as it is an Imperial India Pale Ale. From Marshall Michigan, this is a true double. According the the label on the bottle, all of the ingredients of Dark Horse’s standard IPA were doubled, save for water. It isn’t a groundbreaking brew by any means, but crafted perfectly for hop heads who want an imperial with a nice ratio of bitterness to aroma. Dark amber bodied with a frothy cream-colored head. I haven’t been drinking a lot of DIPAs lately, but this is one I am glad I tried. End of palate. Good night.

Saturday was a lazy day for the most part, but Saturday evening around 4:00PM Bailey’s Taproom hosted a Beer Advocate gathering. Here, several lovers of craft beer brought some cellared favorites. Many of these beers were out-of-market brews brought from other regions of the country and obtained through a signature trade. Though they are not commonplace, you will likely

Midnight Sun Uranus, Boulevard Bourbon Quad, Cascade Apricot Ale, Surley 2, Dark Horse Perkulator, and verticals of Stone Russian Imperial Stout (2006-2008) and Firestone-Walker XI, XII, and XIII (2007-2009). My favorite beer was probably a 1997 Cantillon Vigneronne. Thanks, Jim. The whole event was beer geek overload; a sort of glut for the gut. Still, it is a great way to knock  a few brew experiences off your bucket list. Thanks to everyone who shared, and especially to Bailey’s for sharing their space. Thank goodness for Public Transit, too. 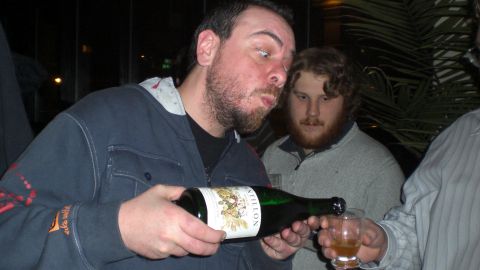 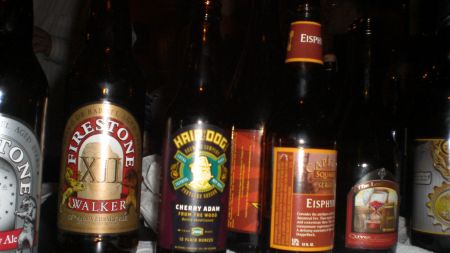 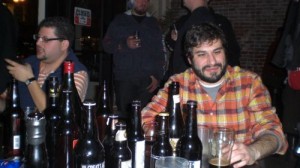 After the mayhem at Bailey’s, I headed back home with our friends Matthew and Kate to have a night cap. A growler of Double Mountain’s Abbey Hoffman (thanks Kyle) was a perfect fit. 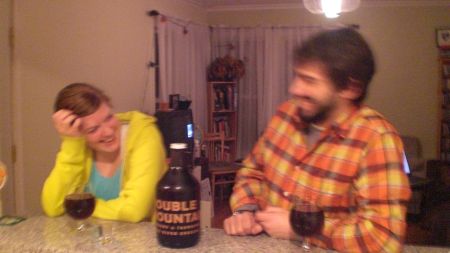 Sunday: Billy the Mountain and Gose Release at Upright

Holy crap! What I thought was gonna be a nice little event at Upright turned out to be Sunday church for the beer crowd. The minister of this insanity was Alex Ganum who greeted us with samples of Billy the Mountain Olde Ale. I knew coming into this that it was a beer aged in Pinot Noir barrels and employing the use of Brettanomyces, but I had no idea it would taste the way it did. Dark, malty, with well-masked alcohol. Vinous and way too easy to drink. I was only planning on having a few brews but ended up have a few Billy’s, a Gose, a Fatali Four, a new French smoked ale, and my favorite the brightly hopped Congo Pale Ale. Upright featured a great assortment of hors d’oeuvres and snacks. The lines were quite long, but the hospitality of Upright and the overall ambiance made them almost unnoticeable. Prost! 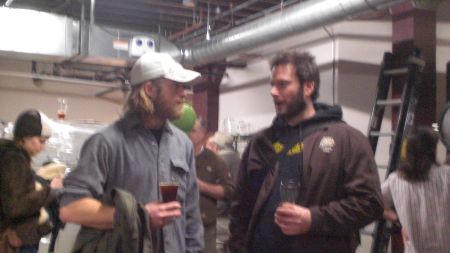 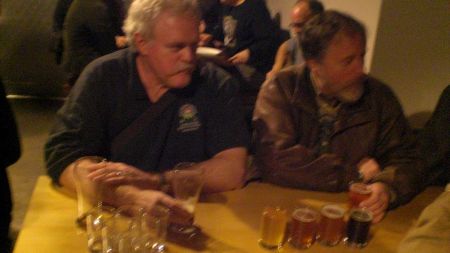 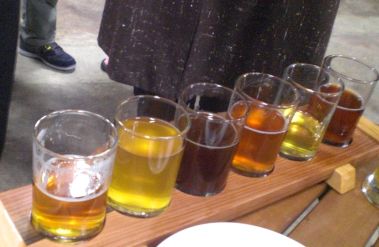 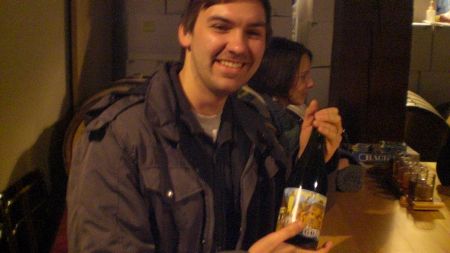 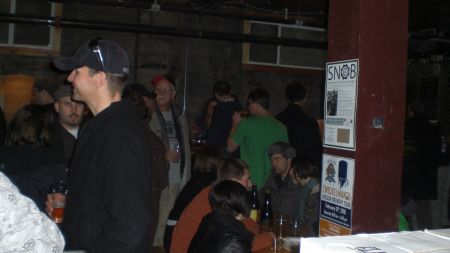 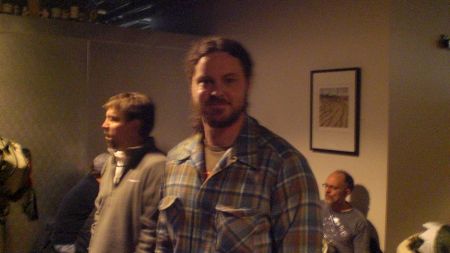 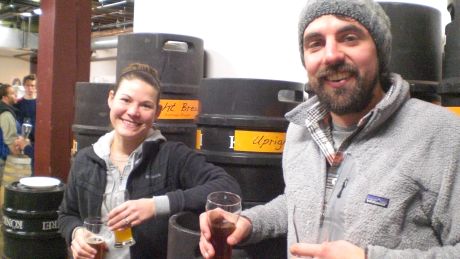 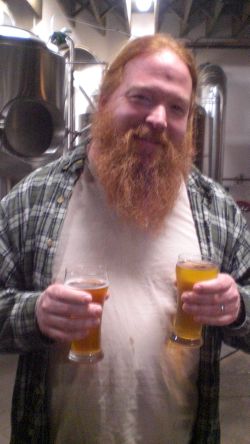 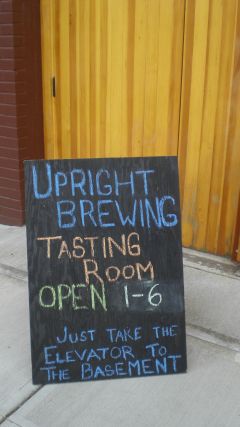