When it comes to beer geekery, Tampa’s Cigar City Brewing sits towards the top of the list. Their small production and limited distribution makes Cigar City beers ones that are sought out by the beer geek. This is especially evident when you live in the Pacific Northwest, almost as far from Tampa as possible while staying on the mainland of the United States. Cigar City Brewing receives cult like status among the beer folks. BeerAdvocate gives Cigar City the highest score possible of 100 which describes them as a “World Class, Must Try” brewery.

Recently Cigar City Brewing’s brewmaster, Wayne Wambles, traveled to Portland to brew alongside the seasoned brewers at Widmer Brothers Brewing in North Portland to brew up a special beer that would become a three different bottle release called Gentlemen’s Club. The base beer was an Old Ale that has been aged on three different woods: rye whiskey barrels, bourbon barrels and new oak spirals.

Drawing inspiration from an Old Fashioned cocktail recipe and the Gentlemen’s Clubs where the cocktail was first served over 100 years ago, this collaboration beer brings together two breweries from opposite ends of the country and ingredients from the home states of both breweries. Using an Old Ale recipe as the base beer, Gentlemen’s Club was brewed with cherries and oranges, Alchemy, Sorachi Ace and Pacifica hops, and hand-selected specialty malts to mirror the qualities typically found in an Old Fashioned cocktail. The beer was aged on three different woods: bourbon barrels, rye whiskey barrels and new oak spirals, resulting in three unique versions of the beer, each offering a slightly different take on the same age-old recipe. 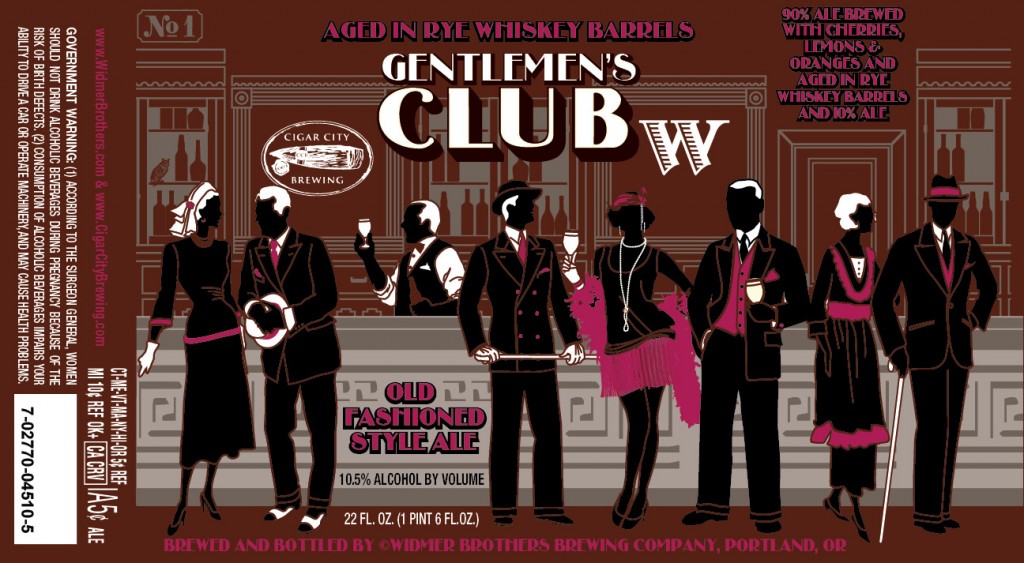 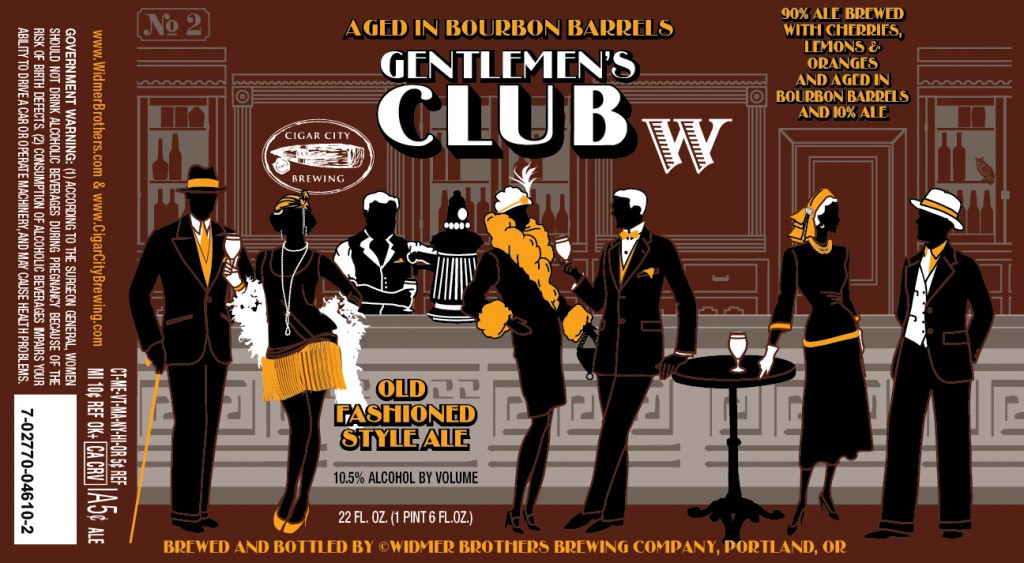 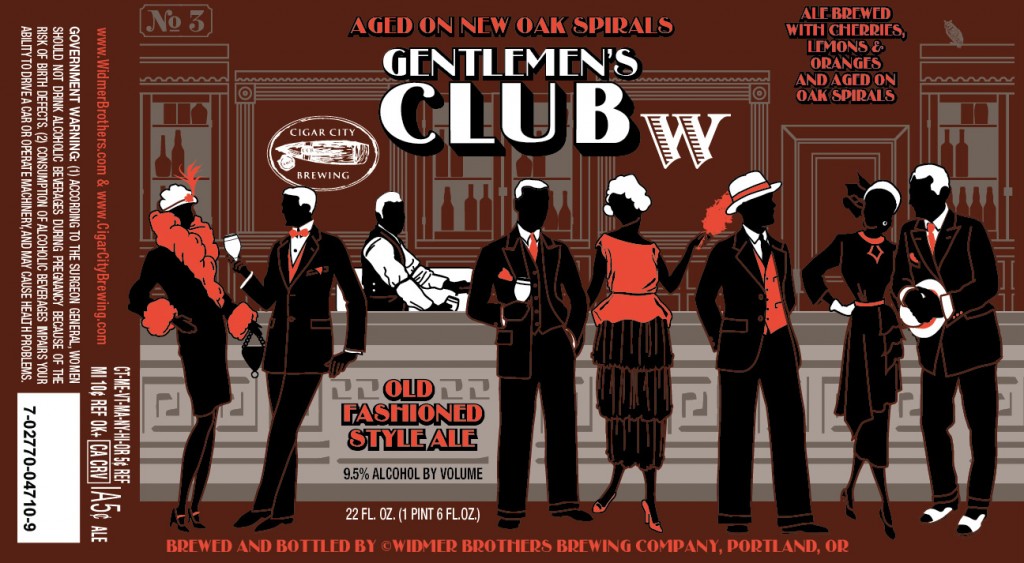 You’ll be able to try these beers and others over the next two evenings. Tonight’s event will be at Widmer’s Gasthaus and tomorrow nights event will be at The Rookery Bar at Raven & Rose. More details including tonight’s taplist is listed below. 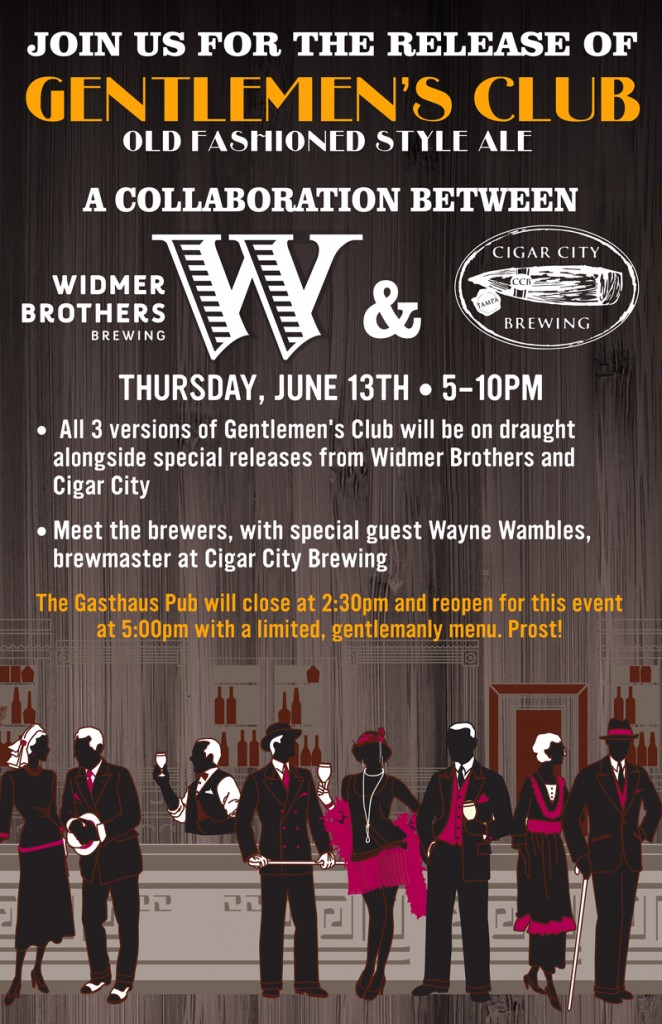 Join Rob Widmer and Ben Dobler of Widmer Brothers Brewing and Wayne Wambles, brewmaster at Cigar City Brewery for the release of a special collaboration beer, Gentlemen’s Club. Three versions of this limited release beer, each aged on different wood (bourbon barrels, rye whiskey barrels, and new oak), will be released for the first time during this Portland Beer Week Event. A handful of special releases from both breweries will also be available on draught, including several favorites and special releases from Cigar City (while supplies last). Bottles of Gentlemen’s Club will be available in the Widmer Brothers retail store beginning at 5pm.

And most importantly, here is the tap list for this one of a kind event…

We’ll also be pulling out some rare, special beers from the cellar for the event.

(Six Cigar City Beers will be poured at a time)

The Rookery Bar at Raven & Rose

Widmer Brothers Brewing and Raven & Rose invite you to attend Gentlemen’s Club Flight Night. All three versions of the Gentlemen’s Club collaboration beer from Widmer Brothers and Cigar City Brewing, a beer modeled after an Old Fashioned cocktail, will be poured alongside an Old Fashioned cocktail from the mixologists at The Rookery Bar (upstairs at Raven & Rose).