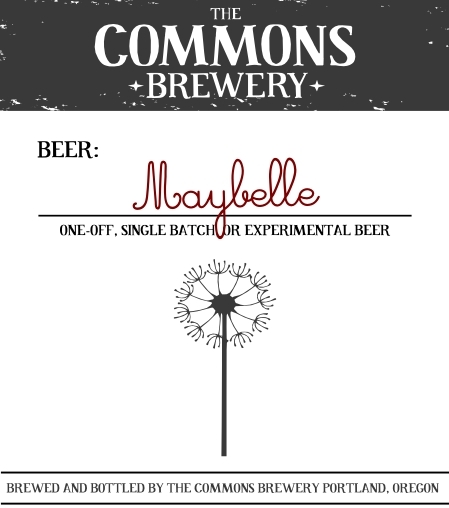 Get ready to head to The Commons Brewery tomorrow for their bottle release of Maybelle. They’ll be releasing the 2nd batch of Maybelle on Saturday, November 23, beginning at 2:00pm in their Tasting Room.

The bottles will be $10 each and limited to up to 6 per person. For those of you that want to sample it before purchasing a bottle, their tasting room will also have Maybelle on draft for the first time ever.

Maybelle was named one of the best beers during this year’s Great American Beer Festival by the Denver Post, Maybelle is a farmhouse ale aged in Adelsheim Vineyard White Wine barrels with a culture of Brettanomyces from Drie Fonteinen. The grain bill has been adjusted slightly on this batch to produce a slightly deeper orange hue and the culture has produced a touch more acidity and citrus.

The Commons Tasting Room is located in Southeast Portland at 1810 SE 10th Ave, Portland, OR (entrance on SE Stephens between 10th and 11th). Hours are Thursday and Friday 5-9pm, Saturday 2-9pm and Sunday 2-6pm.