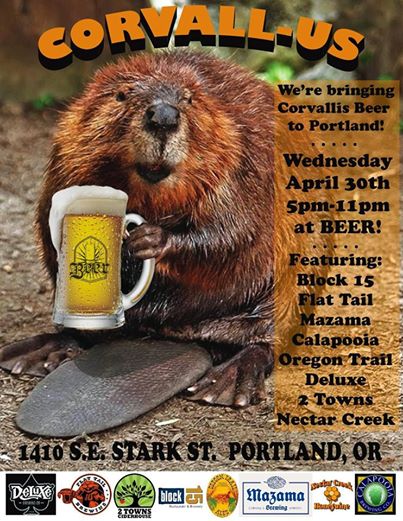 The ambiguous Southeast Portland beer bar, Beer, is hosting Corvall-Us, an evening of beer, cider and mead from Corvallis and Albany on Wednesday, April 30th. Beginning at 5:00pm and ending at 11:00pm the breweries featured will include Block 15, Flat Tail, Mazama, Calapooia, Oregon Trail, and Deluxe. To mix things up a bit Beer will also feature 2 Towns Cider and Nectar Creek Honeywine. 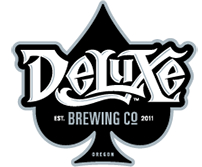 Many of you are well aware of the breweries being featured but a newer one is on the bill, Deluxe Brewing Co. Based in Albany, Deluxe has been out in the marketplace for the past since this the fall of 2013. Deluxe Brewing is a production brewery located on the banks of the Willamette River that mainly serves the Southern Willamette Valley with accounts in Albany, Salem, Eugene and Corvallis. Brewing on a 15 barrel brewing system, Deluxe focuses on lagers and offers a Pre-Prohibition Pilsner, Amber Lager and Schwarzbier. Later this year, Deluxe’s next venture will see the light of day, Sinister Distilling Company. This new distillery has now started producing whiskey, which is aging and is scheduled to be available later this Summer.

Join Beer on Wednesday, April 30th for Corvall-us! Featuring beers from some of Corvallis and Albany’s finest.