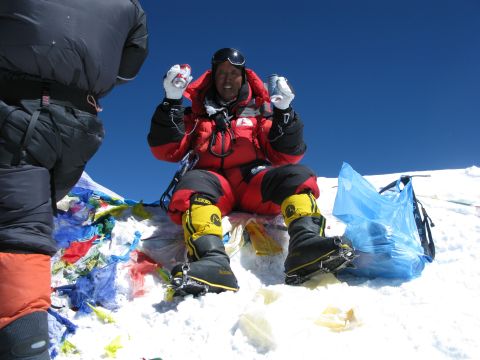 Apa Sherpa breaks his own world’s record by summiting Mount Everest for the 20th time at 8:34 a.m. Saturday while taking the first craft brewed beers with him. Bohemian Brewery’s Viennese Lager and Czech Pilsener were there with Apa on the entire journey to the top. Apa’s goal in climbing this year was to help efforts to increase educational opportunities in the Khumbu Region, which includes the areas around Mount Everest.  Bohemian Brewery was there to support Apa in his goal. This is the first time a craft beer, one in a can, has been taken to the summit of Mt. Everest.

In a statement Apa prepared in anticipation of reaching the summit, he said, “I am thankful to have been able to climb Mount Everest for the 20th time. I climbed this year to raise awareness about the Apa Sherpa Foundation, which is dedicated to increasing educational opportunities for people in the Himalayan Region. I also climbed to bring attention to the damage done to the Himalayas because of global climate change.” 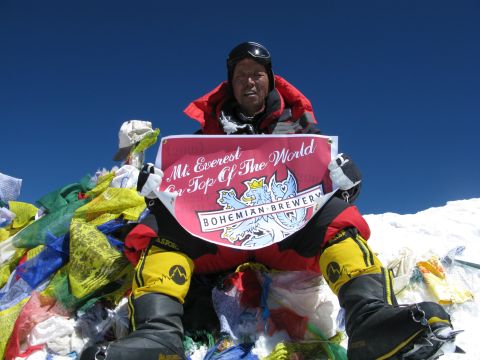 Bohemian Brewery is a craft brewery based in the Salt Lake Valley in the community of Midvale with a production of 2000 barrels per year.

Bohemian Brewery offers it’s European-style lagers for sale at finer restaurants, bars and grocery stores throughout the state of Utah on draft and in a recyclable eco-friendly can.

The Apa Sherpa Foundation was recently organized as a nonprofit organization to help Apa extend the educational opportunities that his children have to his fellow Sherpa in the Khumbu. For more information, go to http://www.apasherpafoundation.org/

Other thoughts we have concerning this:

How did the beer hold up?  Did anyone ever drink these? With high temperatures around -15°F, it must have frozen solid. Would this make it an ice beer? Does Bohemian now take over Coors Light’s claim of “coldest tasting beer”? Were Summit hops involved? Did Apa have a drink at the summit? How much did Bohemian pay Apa to do this? What are the effects of drinking alcohol at 29,000 feet? Is that legal in Utah?