We headed to Arkansas for a whirl wind trip to see one of my good friends get married to his now lovely wife. Of course we had to check out the beer scene along the way. We didn’t fully immerse ourselves, but we did visit several places that are worth mentioning and going to if you ever end up in the Little Rock or Fayetteville area.

We flew into Little Rock early Thursday evening with not much of an itinerary except to find a place to eat and to sample locally brewed Diamond Bear beers. The hotel staff at the front desk recommended a few restaurants. We ate at one that was kitty-corner to a place called the Flying Saucer Draught Emporium. The Flying Saucer is a franchise with locations mainly found in the southeastern United States. Their Arkansas location boasts about 75 beers on tap and they have several coolers behind the bar full of bottles. I’ve read that they have over 200-300 different kinds of beer available depending on location. This seemed very probable. 200 different beers are also what you need to consume if you’re trying earn a spot on their wall. Yes, you too can have a saucer plate with your name on it if you have what it takes. Keep going with it and earn even more benefits. 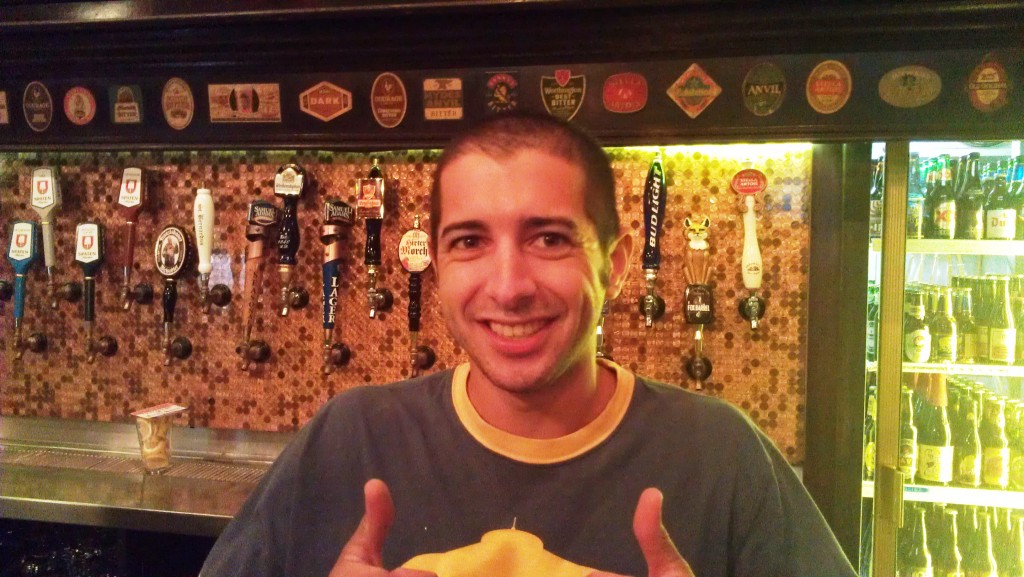 Our beertender, Eric was pretty cool and a nice guy.

At the Flying Saucer we tried several beers. I was hoping to have Diamond Bear’s IIPA on draft, but the tap was dry. So for my first beer I opted for a bottle of their Presidential IPA. Bill and Hillary would be proud! I was surprised to find I liked it. Coming from the land of IPA’s I wasn’t expecting much. It turned out to be a decent beer and it would be a beer that I would order several times while on our trip. I’m a firm believer in drinking local.

Diamond Bear also makes several other styles of beer. I tried their Southern Blonde and their Pale. I’m not a big fan of Blondes, at least when it comes to beer, but it was good if you’re looking for a lighter beer with easy drinkability. The Pale turned out to be English in style with some sweetness and lightly hopped. I had several of these boys on tap and out of the bottle while in Arkansas. It was one of the beers served at the wedding we attended. Good choice Daniel and Whitney!

We missed checking out Boscos which was just down the street from the The Flying Saucer. Boscos is another small brewery/restaurant franchise with (three) places in Tennessee and one in Little Rock. We were actually going to have dinner there, but we passed a place with Cajun/Creole food that our hotel recommended and the menu looked awesome. Unfortunately, it left us a little disappointed. We should have stuck with our original plan.

On our way out of Little Rock we swung by Diamond Bear Brewing just to take a quick peak. It wasn’t open yet, so we didn’t get to do an official visit. I snapped a few photos and now felt content that I at least saw where this beer originates from. The brewery, which appeared to be an old service station, was attached to a bakery. It’s was somewhat ironic, because the bakery had a sign on the wall stating they used Bob’s Red Mill products in their baked goods. It was nice seeing a tiny bit of Milwaukie, OR being represented in Little Rock. 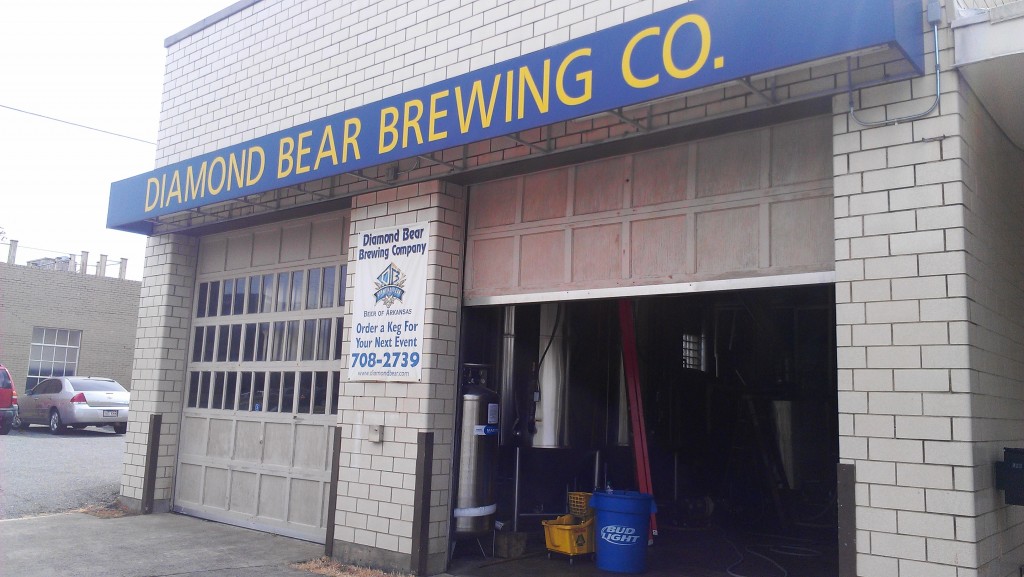 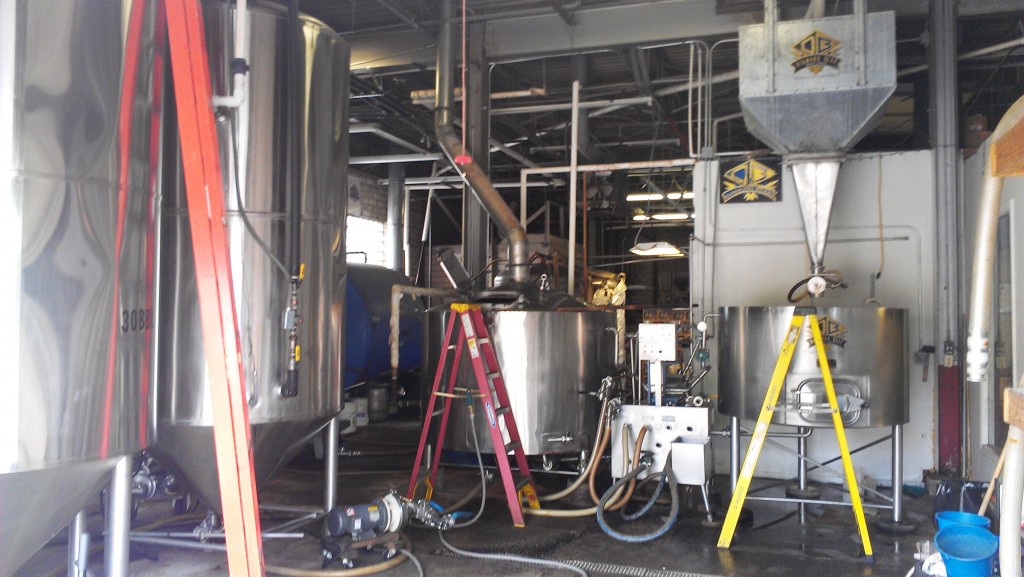 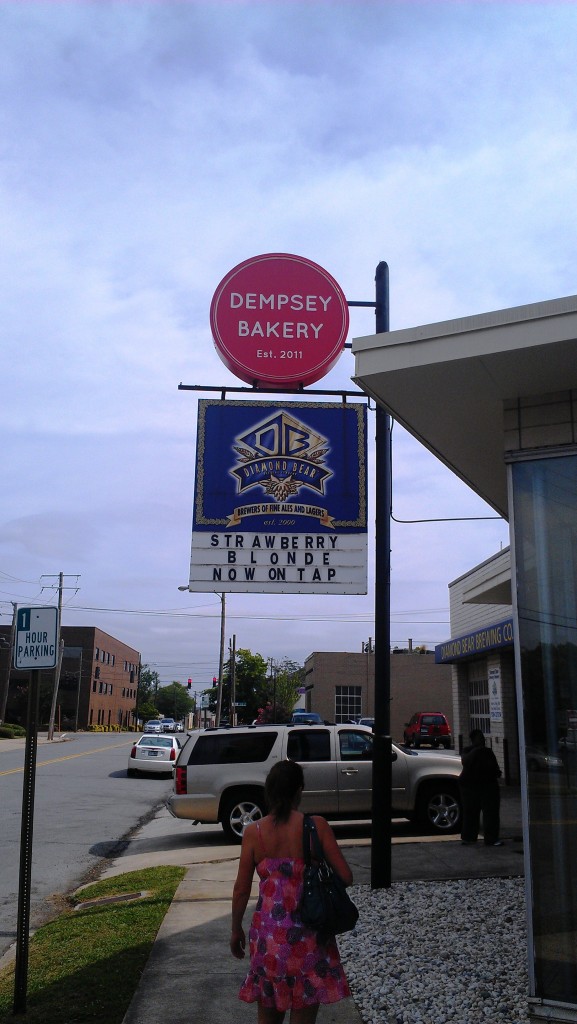 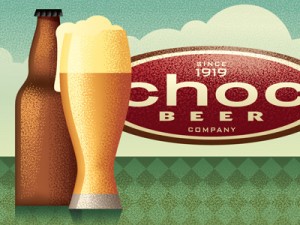 Oh crap, let’s rewind for a second and go back to the Flying Saucer. I forgot to mention that my Fiancée Wendy had an amazing IPA on tap that was brewed in Krebs, Oklahoma by Choc Beer Company. She raved about it. Wendy couldn’t believe an IPA of this caliber was brewed in Oklahoma. Choc’s website reads, “Here at Choc, we offer some of the finest unfiltered beers in the world. We are confident you’ll agree. If you don’t, well then, you probably just don’t like beer”. Well, Wendy wholeheartedly agreed. I took a few sips and it was pretty damn good. I also almost forgot to mention that I sipped on a tasty beer from Charleville. It was called Hoptimistic. Charleville hails from St. Genevieve County, Missouri and is both a vineyard winery and microbrewery…what a fantastic combo! 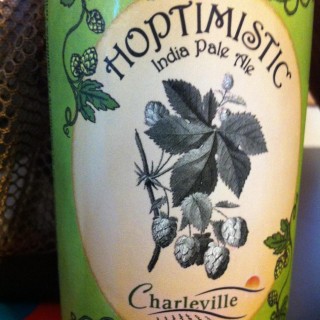 The next morning we packed up and hit the road for a three hour drive to the Northwestern corner of the state. Our next stop, Fayetteville, Arkansas.