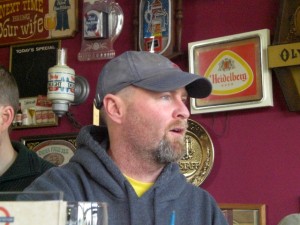 After three fun years, Dave Fleming – aka Chowda, Squirrel, Richochet, Flem, Flemdog –  is saying goodbye to Lompoc Brewing and we are throwing him one final soiree. Please join us for a final toast to Dave this Friday, July 13 at Sidebar, 3901 N Williams Ave, from 4 to 10 pm. It’s a no host bar, but we’ll have some complimentary snacks available.
Dave has had an illustrious brewing career. He started slinging pizza at BridgePort in 1992, where he also did some cask cellaring. In 1994, he moved on to Lucky Lab, where he served as Pub Manager for two years. In 1996, he was promoted to assistant brewer at the Lab, where he worked until 2002. He then did a few weeks stint at Rock Bottom Bellevue and Caldera Brewing (he was chasing a girl around and she had working interviews in Seattle, Ashland and Bend – she ended up in Bend and so did he). He settled in Bend at Silver Moon from 2002 to 2003. In 2003, he washed kegs and cleaned tanks for Tonya Cornett at Bend Brewing in 2003. Then he went to McMenamins Old St Francis as the Head Brewer from 2004-2006. But Portland came calling, and in 2006, he went back to where he started brewing, Lucky Lab, this time at its new Quimby location. He was there for two years, then headed East again – this time setting up Three Creeks Brewery in Sisters, where he was the master of his domain for a year. In 2009, he came to Lompoc, where we have been fortunate to have him as our Head Brewer ever since.
Dave is leaving to sell for Willamette Valley Hops, a family owned and operated hop farm in St. Paul, and are one of the top producers of premium hops in the United States. He’ll be based in Portland, so you’ll still see him around town.
This is nothing formal, no RSVP, just wanted to let you know. Fee free to share with your readers/listeners. We hope to see you this Friday – cheers!
Tags:Dave Fleming, Lompoc, North Portland, Oregon, Portland, sidebar