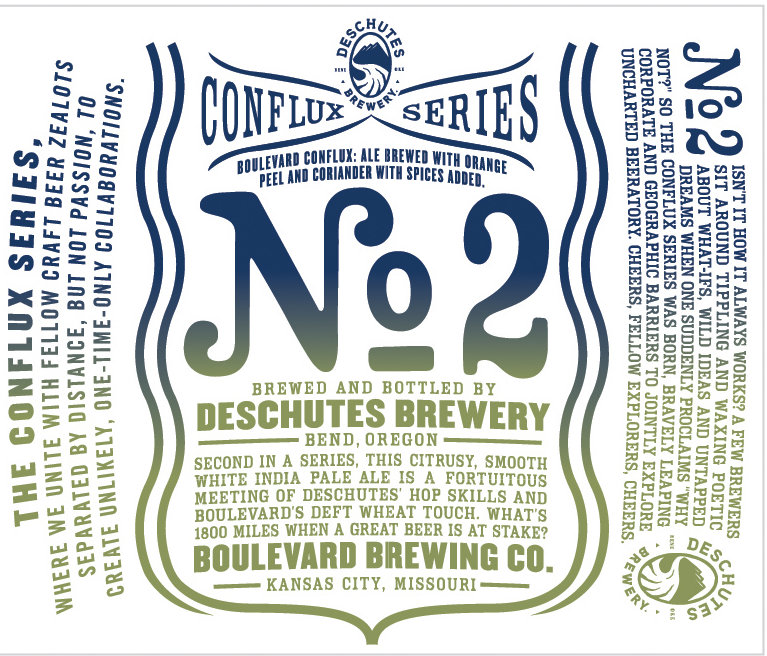 Lots going on at Deschutes Brewery. Here’s the word from them:

The second beer in Deschutes Brewery’s new collaboration beers, called the Conflux Series, this White I.P.A is a convergence of groundbreaking genius. Fortunately, for everyone with taste buds, two esteemed brewmasters –  Boulevard Brewing’s Steven Pauwels and Deschutes Brewery‘s Larry Sidor  – have pioneered a never-before-seen style with practiced composure and sure vision. Conflux #2, a true collaboration ale, pairs Boulevard’s Belgian and wheat expertise with Deschutes Brewery’s hop mastery. Both breweries will separately bottle and sell this beer in their respective territories.  Where territories overlap, a unique chance to sample both brews side by side will be possible, as slight differences in brewing locations and raw ingredients guarantee distinct experiences.

WHERE: Available in most areas where Deschutes is sold

The newest beer in Deschutes Brewery’s coveted Reserve Series, The Stoic’s journey from Belgian-style Tripel to American Quad is a remarkable one.  A simple German Pilsner malt bill and a low-key profile of Hallartau, Czech Saaz, and Northern Brewer hops equip you for the more distinctive aromas and flavors that lay ahead.  Ingredients like Belgian candy sugar, beet and date sugars, and pomegranate molasses impart a clean, tangy sweetness.  Pinot Noir and rye whiskey barrel-aging suggest notes of spice, citrus, pepper, vanilla, and toasted caramel like offerings to the gods.  Unraveling the intricacies of The Stoic is evidence of a life bravely done.

WHERE: Available in most areas where Deschutes is sold

Every year, fall’s crisp, cool air signals the imminent arrival of winter. Thoughts of snow, friends and family, the holidays, and — Jubelale. Brewed with dark crystal malt creating a luscious holiday note with bountiful hops to excite your taste buds— it’s easy to see why Jubelale is the perfect complement to the season. Continuing the tradition that is almost as anticipated as the beer itself, a new painting has been commissioned from a local artist combo to reflect this Festive Winter Ale.

WHERE: Available in all states where Deschutes is sold

Each year around Labor Day, Deschutes brewers high-tail it over the pass to the Crystal hop fields near Salem for the harvest. After bagging these aromatic jewels, we hustle back and toss them into the brew kettles within four hours of picking. Our reward: a pale ale with a uniquely bright citrus punch and fall spice. It’s something only Deschutes would take past the idle-talk stage.  Available for the first time in 6 packs!

WHERE: Available in most states where Deschutes is sold

We love fresh Willamette Valley hops so much that we decided to go the extra mile for this beauty.  Goschie Farms is growing an acre of heirloom Cascade hops just for us so we can release this fresh hop version of our Mirror Pond Pale Ale. Base Camp for beer fanatics just got a little more interesting.

WHERE: Available in most states where Deschutes is sold

WHAT:         This week! What is Base Camp you may ask? It’s a place where Deschutes offers beer fanatics a spot to “pitch a tent” of sorts – find a place from which a serious exploration of beer begins. Deschutes Base Camp week is a celebration of Deschutes’ passion-heavy, pioneering brews, starting with the cornerstone of Mirror Pond Pale Ale. The Deschutes team is traveling around to cities all over the west this year to give passionate people everywhere a place to further their journey of beer discovery. In Boise, we’ll celebrate with a week of specialty beer tastings, beer and food pairings and, of course, appearances by Woody, the giant beer barrel on wheels. Deschutes Brewery ambassadors will be on hand to provide some in-the-trenches insight into our courageously crafted brews.

WHERE: All over the Boise, ID area! Visit www.deschutesbrewery.com/events for more details.

WHAT: We love any excuse to celebrate, and that’s why we’re throwing some special parties at our Bend and Portland brewpubs to welcome in our 23rd year. Also the release date of our Reserve Series Black Butte XXIII, we’ll have festivities, food and beer for all our friends in the outdoor party of the season.

WHAT: We’re kicking off the long holiday weekend along with all the other downtown Bend businesses for the First Friday Art Walk! Join the fun pub crew for barbeque, art, live music and, of course, beer, just behind the pub in downtown Bend. Art Walk has become a focal point for cultural activities in the Bend community and a much anticipated festive beginning to every month of the year. Deschutes will be participating with a back-alley party through October 2011.

WHAT: Deschutes Brewery’s Sagebrush Classic has been benefitting the Central Oregon community for 22 years; raising more than $2 million for nonprofits through its popular golf tournament and feast. In 2011, the event is expanding to week-long series of events to benefit more than 100 participating nonprofit organizations.  The series of events include:

For specific dates, times and cost of each event, visit www.sagebrush.org or contact Aimee Baillargeon, Executive Director at 541-408-6341 or aimee@sagebrush.org.

COST: Ticket information can be found at sagebrush.org

WHAT: The Twilight 5k will be a great time and a unique event because after the race, participants will be treated to a beer garden featuring Deschutes Brewery’s Twilight Summer Ale, great post race food and some live music. The race will also kick off the Bend Brew Fest.  Proceeds from this event will benefit a local not-for-profit organization.

WHERE: The race starts and finishes at the Deschutes Brewery off Shevlin-Hixon Drive in the Old Mill District, Bend, Oregon