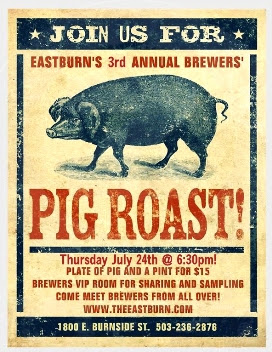 Now in its third year, EastBurn will host their Annual Brewers’ Pig Roast on Thursday, July 24th beginning at 6:30pm. This old fashioned Pig Roast will feature the neighborhood breweries on tap with some sampling to be had. All you need to do is look for the guy with the beer backpack!

This is a public event for both food and beer lovers. Brewers visiting for Oregon Brewers Festival and locals alike are encouraged to bring some beer for sharing and sampling with other brewers and friends. The party starts at 6:30pm and EastBurn will be slow roasting a whole Carlton Farms pig with all the fixins.

For only $15 this will get you a plate of pig with all the fixins’ plus a pint of beer! Doesn’t seem all too shabby.