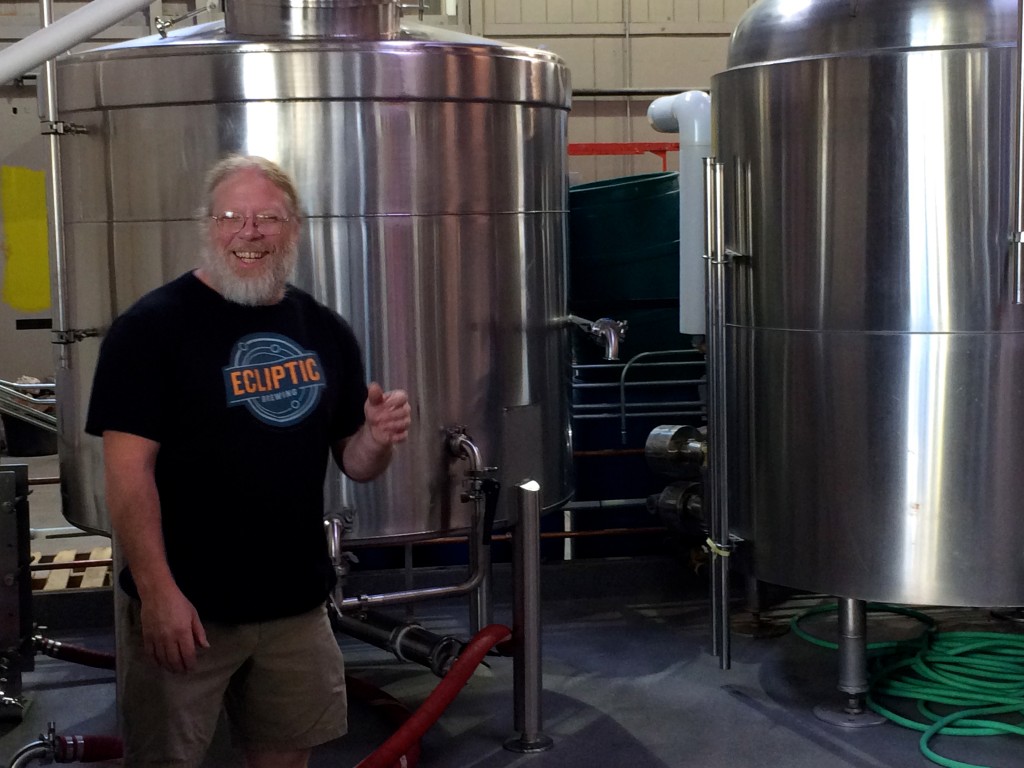 A year ago one of Portland’s most anticipated brewery openings of 2013, Ecliptic Brewing opened their doors on October 20th. In celebration, iconic brewer and owner John Harris will host events including an eclipse viewing party and live bands, complete with an exclusive anniversary-themed menu.

“We’ve had a truly stellar first year at Ecliptic,” said John Harris. “We hope our fans will join us at the brewery for our celebration, and that people who have yet to try Ecliptic will come check us out.”

Back on October 2, 2013, Ecliptic brewed their first batch of beer, Procyon Pale Ale. Since this time they have done 120 brews producing 24 different beers at Ecliptic. These beers will be recognized on their special anniversary shirt.

Solar Eclipse Viewing Party
Thursday, October 23:
Ecliptic Brewing unites Harris’ two passions: brewing and astronomy. With such, the brewery regularly brings its fans together for astronomical observances. From 1:30 p.m. through 4:30 p.m. on October 23rd, Portland will see a partial solar eclipse with more than 50 percent of the sun blocked. Ecliptic will host a viewing party in the parking lot, complete with the brewery’s regular food menu paired with special seasonal beers.

Intergalactic Hoedown and First Anniversary Celebration
Saturday, October 25:
Come help celebrate Ecliptic’s first cycle around the sun on October 25th as Ecliptic will be tenting the patio to allow for more fun for all. On their one year anniversary, the brewery will debut its Rigel Sparkling Riesling Anniversary Ale and Oort Imperial Stout, as well as other special beers from its vault. The restaurant will feature anniversary Mintaka Stout Braised Ribs from Chef Molitor, and newly designed Ecliptic t-shirts will be available for sale. Harrris will also host complimentary brewery tours at noon, 1 p.m., 2 p.m. and 3 p.m.

Several bluegrass-style bands will entertain throughout the day, including:

For their One Year Anniversary, Ecliptic will feature the return of Rigel Sparkling Riesling Ale. This lighter bodied ale is brewed with fresh pressed Riesling juice from Tesoaria Vineyards. They will also be tapping OORT Imperial Stout for the first time. Brewed 12 months ago this beer has been aging in steel and bourbon casks for the past 4 months. Ecliptic will also be releasing Pollux Imperial IPA and Altair Fresh Hop Ale.

Below are more complete descriptions of all four beers.

OORT Imperial Stout
Named for the Oort Cloud, a spherical region surrounding the planetary system, Ecliptic’s Oort Imperial Stout is brewed to be aged in Bourbon Barrels. A limited number of non-Bourbon kegs were saved and aged throughout the past four months for a special showcase at Ecliptic’s anniversary. This will be the first time the stout has been poured.
ABV: 8.5% IBU 71, GRAVITY: 21 °P

Pollux Imperial IPA
Pollux is named after one of the Twin stars in the constellation Gemini. This was our 100th batch brewed here! Big and resinous from double dry hopping. Once in the fermenter and again in the aging tank. The beer has a rich malt character with hints of caramel. Cascade, Centennial, Citra and Nugget hops lead the way. The hops lend tropical and citrus notes into a wonderful hop flavor and crisp bitterness.
ABV 8% IBU 75, GRAVITY 16.8°P

With November fast approaching Ecliptic’s seasonal menu will change again on October 31 to our Samhain menu. Then their next Lunation Dinner will soon be taking place. Their Lunation Dinner series is their monthly celebration of Food and Beer. The monthly cycle of the Moon around the Earth is the Lunation cycle. Join Ecliptix on November 4th for their next dinner. The theme of the food is “ROOT’S”. Call (503) 265-9002 for reservations.