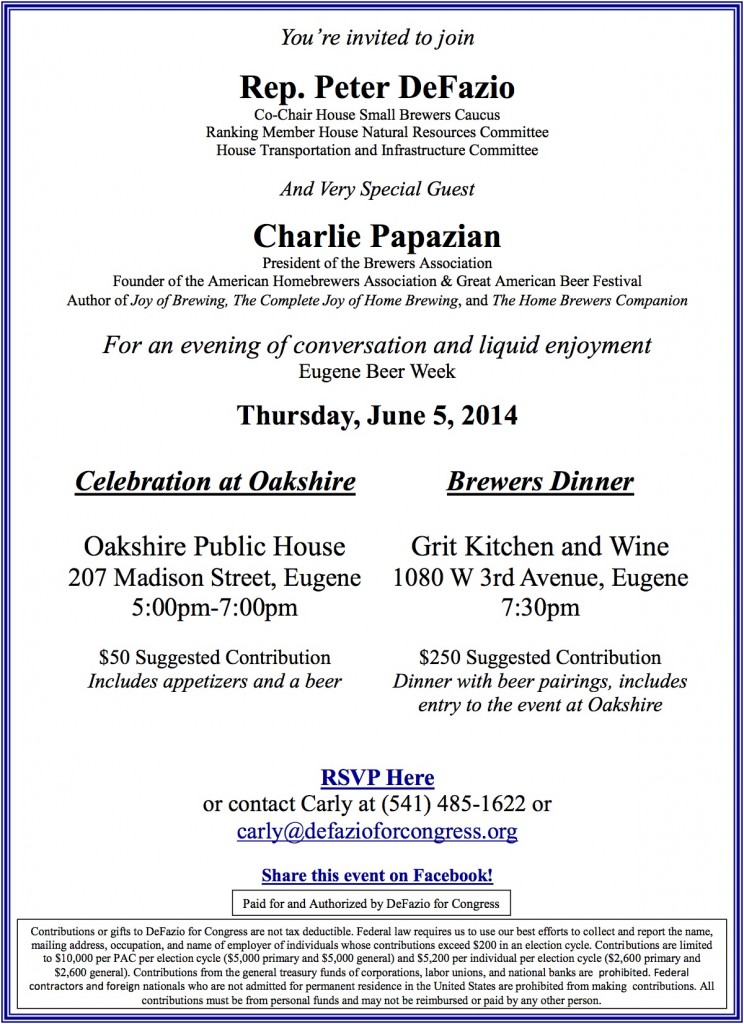 As Eugene Beer Week moves along Representative Peter DeFazio welcomes Charlie Papazian to Eugene for a few events and fundraisers for the career politician’s re-election campaign. Papazian, President of the Brewers Association, will be a featured guest on Thursday, June 5th, at a Celebration at Oakshire Public House from 5:00 to 7:00pm followed by a Brewers Dinner held at Grit Kitchen and Wine beginning at 7:30pm.

Representative DeFazio is excited to have homebrewing legend, and BA President, Charlie Papazian, in Oregon to experience the bounty of our state’s craft brewing industry. Rep. DeFazio is hosting Papazian during Eugene Beer Week for a couple of fundraisers and for Saturday’s Sasquatch Brew Festival. DeFazio’s campaign is holding two beer related events with both DeFazio and Papazian in attendance with proceeds going to supporting DeFazio’s reelection.

Rep. DeFazio and Papazian will be at Oakshire Brewing Public House in Eugene on June 5th, from 5:00 to 7:00pm. This event is a chance for beer-lovers to get together for a few hours to talk beer and swap stories. Rep. DeFazio is one of the co-founders along with Rep. Jim Gerlach of the House Small Brewers Caucus. The DeFazio campaign is asking for a suggested contribution of $50, which includes one drink ticket and appetizers, to rub elbows with these two distinguished gentlemen. 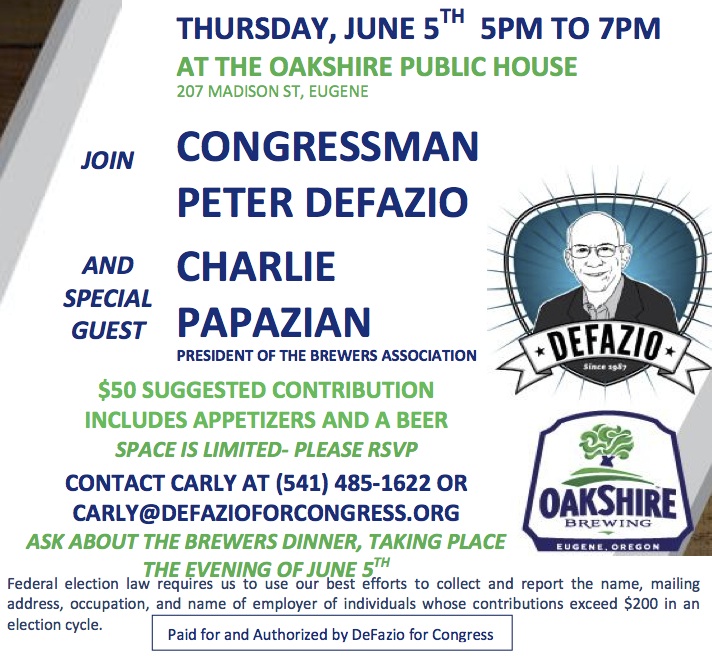 Following the event at Oakshire, the campaign is holding a smaller more intimate brewers dinner at Grit Kitchen and Wine. The majority of attendees will be brewery owners, but they are also welcoming members of the public, too. The dinner will feature beer paired courses featuring some of Oregon’s finest offerings. Both Rep. DeFazio and Papazian will lead several of the tastings, along with a few of the brewery owners. Seating is very limited for this dinner. Admission to the dinner event is a suggested contribution of $250 which also covers entry to the evening’s earlier Celebration at Oakshire.

Listed below is the tentative food menu for the dinner at Grit. Many of the beers that these dishes will be paired with are still being decided upon.

If you can make it to either event, please RSVP with your donation. Or, you can call the DeFazio office at (541) 485-1622 or email at carly@defazioforcongress.org.