Southern Tier Brewing Company of Lakewood, New York has been making a splash on the East Coast since its inception in 2004.  Founders Phineas “Phin” DeMink and Alan “Skip” Yahn have an affinity for producing captivating beers to the liking of beer enthusiasts everywhere.  Now available for distribution in Washington and Idaho, the noteworthy brewery has received numerous accolates including being listed as one of Beer Advocate‘s top 50 American Breweries for 2007.  BA also ranked Southern Tier’s Un*Earthly Imperial IPA as the “81st Best Beer in the World.”  DeMank, a graduate from the world famous Siebel’s Institute in Chicago, spent time brewing with Goose Island Brewing in Chicago.  This was following a stint at Ellicottville Brewing in Upstate New York formerly owned by his current partner Yahn and still running under new ownership.

Portland, Oregon beer geeks are happy to know that they can now drive across the Columbia River to Vancouver, Washington and purchase six brands of Southern Tier brews from retailer By the Bottle. According to DeMink more brands are on their way in the near future.  Distributors the Odom Corporation currently carries all imperials including the Un*Earthly, the Hoppe Imperial Extra Pale Ale, Oat (Imperial Oatmeal Stout), Big Red Imperial Red Ale, and the seasonal imperial Pumpking.  “We have a whole standard line of beers” says DeMink.  “Out West we are focusing on our Imperial Series.”  Looks like the man knows us well.  Even Southern Tiers “normal” line-up of beers are full-bodied and flavorful.  “These are inspired beers,” says DeMink. “We started this brewery because we were sick of brewing pales and ambers.  That got uninteresting. We’re big into hops.  We felt the need to up the ante and jack-up the alcohol.  These are high gravity beers we stand behind.”  These creative beers feature a “Blackwater Series” of bold flavorsome stouts as well as a “Cuvee Series” of barrel aged imperial ales.  Here’s a look at the six Southern Tier beers currently available in Washington and Idaho: 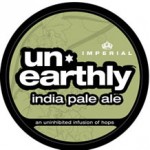 Un*Earthly Imperial IPA: At the Southern Tier Brewing Company, vigorously hopped beer is our standard and inspiration. We continue a commitment to innovation with our most aggressive offering yet. Unearthly is a manifestation of the brewer’s craft; skillfully balancing art and the forces of nature to produce a divine liquid. Delicately pour a taste into a fluted glass. Smell the enchanting aromas of the hops waft forward as your first sip divulges this beer’s fervent soul. To underestimate Unearthly is to trifle with the mysteries of the universe, so please consume wisely.
11.0% abv • 7.5ºL • Imperial India Pale Ale • 22 oz 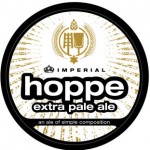 Hoppe Imperial Extra Pale Ale: The simplicity of Hoppe tests the skill and ability of the brewer to create something truly majestic. We craft this much like a sculptor who uses only a hammer and chisel to shape stone into a masterpiece. Hoppe is spawned of these few essentials: barley, wheat, hops, yeast and water. This limited palette is an exercise in minimalism, with refined elements which are deliberately selected. This simple combination creates a golden shimmering brew infused with delicate aromas. The artful nature of this beer is exposed with the first taste. As the malt and hops create a composition of flavors, an elegant finish leaves an impression that your tastes will not soon forget.
10% abv. • 4ºL • Imperial Extra Pale Ale • 22 oz (pronounced ‘hop’) 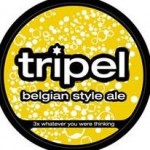 Belgian Style Tripel: Don’t let Tripel’s light color and delicate aroma fool you, this is one serious beer brewed with maximum effort. First, we introduce the freshest barley to crystal filtered water. Second, we add the best hops shipped directly from Europe. Third, our special yeast is the catalyst for fermentation, gobbling sugar and creating alcohol as it works. Some say that the Belgian monks who first brewed this style called it triple to denote its high alcohol content. Still others believe triple’s origins lay in its triple fermentation; twice in the brewery and once in the bottle. Whatever the answer, ours is the Tripel threat. It’s three times whatever you were thinking.
9.0% • 4.1ºL • Belgian Triple Ale • 22 oz 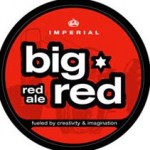 Big Red Imperial Red Ale: Inspiration can sometimes be found in the strangest of placed. This eccentric brew started with a single flower from a hop named Hallertau. The delicate and spicy aroma present in this flower has been responsible for generations of great beers. Hallertau hops are to a brewer what an old tractor is to a farmer: reliable. Big Red expresses the nobility of Hallertau by placing it at the forefront of this Imperial Ale. Pour it into a snifter. A swirl allows the spicy aromas to come forward as a taste to the lips reveals the complex balance between sweet malts and the bitterness of hops. Big Red’s ability to please is as dependable as your grandpa’s old tractor, and just as powerful–so please don’t drink and drive.
9.5% abv • 15ºL • Imperial Red Ale • 22 oz 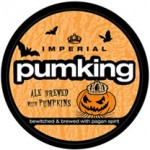 Pumking Imperial Pumpkin Ale: Pumking is an ode to Púca, a creature of Celtic folklore, who is both feared and respected by those who believe in it. Púca is said to waylay travelers throughout the night, tossing them on its back, and providing them the ride of their lives, from whichthey return forever changed! Brewed in the spirit of All Hallows Eve, a time of year when spirits can make contact with the physical world and when magic is most potent. Pour Pumking into a goblet and allow it’s alluring spirit to overflow. As spicy aromas present themselves, let its deep copper color entrance you as your journey into this mystical brew has just begun. As the first drops touch your tongue a magical spell will bewitch your taste buds making it difficult to escape. This beer is brewed with pagan spirit yet should be enjoyed responsibly.
9.0% abv / 5.8º L • Imperial Pumpkin Ale • 22 oz 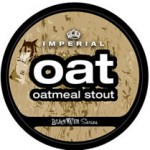 This beer begins in spring when oat seeds are sown as soon as the soil can be worked. Meanwhile, select types of barley are planted with hopes that Mother Nature will be kind. Our brewers wait patiently until the legumes are mature and ready for the scythe. Upon delivery to the brewery, these ingredients are mixed together in the mash tun where they steep, creating a rich molasses-like liquid. Spicy hops are boiled with the thick brew, giving balance and complexity. Brewers yeast feasts upon the rich sugars, concluding its transformation into oatmeal stout.

Pour Oat into a snifter, allow its thick tan head to slowly rise, releasing unbridled aromas. The color of Oat is as dark as a moonless night. The first sip reveals Oat’s thick and nourishing taste. Like a haversack to a horse, a bottle of this stout is a meal in itself. Enjoy responsibly.
11.0% abv • 238º L • Imperial Oatmeal Stout • 22 oz
2-row pale malt / oats / caramel malt / barley flakes / chocolate malt / black malt / kettle hops: columbus & willamette

When asked how his Pumking Ale was able to partake the flavor of an honest to goodness pumpkin pie unlike any other pumpkin beer to date, DeMink, without giving away any trade secrets, says “Lots and lots of research and development.  Same goes for our Chokolat.  With the Pumking, various parts of the pumpkin are added throughout the brewing process.  It’s a difficult beer to make–one we often wish we didn’t have to make.”  Well, as long as the consumer demand it, looks like he’s out of luck.

As for other beers to hit the Northwest market, DeMink assures us that more extreme beers will make their way westward.  “We’ve also been dinking around with more oak-aged beers,” says DeMink. “The Cuvee 2 could very well be in the (Northwest) market soon.”  He also clued us in on new recipes that he and his brewers are toying with like the “Is” Blackwater Imperial Stout brew aged in oak or even barrel aging the Un*Earthly.  “We are also contemplating blending the Ja*vah and the Chokolat and making a mocca beer. There is also the talk of making a pale ale.”  Whatever it is, Phin, ship it our way!