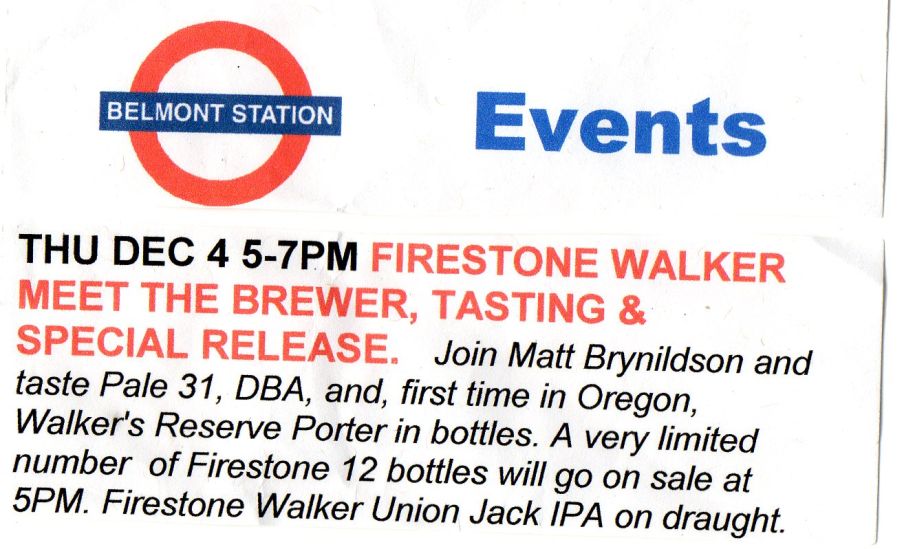 Despite what you might think about Pale Ales, they still warm a special corner of our hearts.  One brew company from Paso Robles, California reminds us of why we gravitate toward beers like MacTarnahans Amber, Mirror Pond Pale, and BridgePort IPA in Craft Mecca. And on top of that, we have evolved to unapologetically viscous beers like the Deschutes Abyss, Three Floyds Darklord (they still need to pipe that in), Pike Entire, and, yes,  the Firestone XII. Like Brian Wheeler, announcer of the Portland Trailblazers, can be found saying these days “Boom-shaka-lakah!”

Firestone XII Mania! The $25.00 price range was obviously steep, but the blow seemed cushioned when considering the brew flew away in the first 40 minutes it went on sale at Belmont Station. It’s obvious that the people want it.  Portlanders will pay the extreme pricetag for extreme beer.  Firestone Walker currently features a line-up of bonus beers such as the currently Oregon-available the chocolaty, robust Robust Porter and bountifully banquetable Union Jack IPA, as well as a spectrum of award winning Anglo-American pales such as the saluta tory  Double Barrel Ale and the Pale 31.

Travis Widdifield (aka “The Pale Pounder”) poured the line-up of Firestone Walker beers from 22-ounce bottles.  He even let our palates in on a sample of the XII.  Quite scrumptious to say the least.   Firestone Walker head brewer Matt Brynildson, a major force behing the beers, happily held a beer related discussion. Brynildson expressed a great liking for Portland and as well as a deep passion for craft brewing.

As usual, Belmont Station offers a tantalizing variety of both bottled and draft beer. Further, it is hard not to indulge in a sumptous glass of the Full Sail Old Board Head.