Today, we at Brewpublic thought we might share our thoughts on a few beers available in the Portland metro area (and perhaps in your neck of the woods) that might tickle your fancy.  So, here is a list of beers that you can still buy today in the area that might slip under one’s radar, albeit, to the uber-geek, SNOB, connoisseur, whathaveyou, these may simply be old news.  Either way, they are beers we stand behind and salute.  Prost!

Widmer TEAser Fresh Hop Extra Pale Ale:  Currently unique beer is available only at the Widmer Gasthaus, but soon to be poured at the remaining two Oregon Bounty Fresh Hop Festivals. The thing that makes this fresh hop offering so interesting is its use of a special (not sure if it is hybrid like the X-114) hop that supposedly possesses no alpha acids.  This means the beer is light and crisp with out the excess piny bitterness of many other hopped beers. TEAser’s glowing golden, yellow body is a great indication of its drinkability.  The beer does have some bitterness to it, perhaps from an addition of some dry hops earlier in the boil, but overall, it is quite a specimen.  Enjoy this beer as well as a German Alt, Widmer’s Decorator Weizendoppelbock, the Old Embalmer Barley Wine, the W ’06 NW Red, and a wonderful Killer Bee Mead, all available at the Gasthaus while supplies last!

Port High Tide Fresh Hop IPA:  The good folks at By the Bottle in Vancouver, Washington are stoked to have this wonderful beer as well as an assortment of other Port and Lost AbbeyPort 2nd Anniversary IIIPA beer on their shelves as well as the 2008 Alpha King winner, the Hop-15 hop bomb. Thanks to distribution laws, one of the best brewery’s in the country has a magnetic pull on beer geeks to one of Washington state’s premier bottle shops.  You see, these brews are still not available across the river in Oregon. The High Tide is an orangey apple juice looking beer with a fluffy rich head and a wonderful C hops aroma.  A little cookie dough/biscuit maltiness is there, but this beer is all about the exploration of the hop and just how far Tomme Arthur and his minions can take it.  By the Bottle also has limited bottles of the 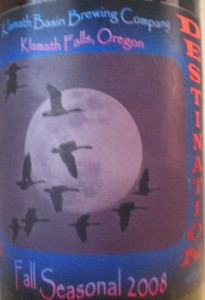 Klamath Basin Migration Destination: Upon a recent trip to Oregon’s deep south, we found this beer at Klamath Basin Brewing‘s “The Creamery” brewpub.  On tap and available from the brewery in limited edition, numbered (just 420 bottled), wax dipped 22-ouncers, this beer was one of many reasons why KBB is one of Oregon’s best breweries hands down.  Now available at a few select locations around Portland (Bailey’s Taproom, Belmont Station Bier Cafe), the Migration is an in-your-face boozy, malty, hoppy monster.  However, everything here is well-balanced. Stinging booze and citrus hops bitterness in finish lay out a wonderful sipping nightcap of a brew. The bartender at Klamath Basin informed me that this beer needs to be set down and aged for a few years and we plan to do so with our bottles.  Klamath Basin will be featured at the Green Dragon‘s Meet the Brewer night on October 21 from 6pm-9pm.  Other KBB beers at this event will include the robust Butt-Crack Brown, Drop Dead Red, and Crater Lake Golden (this beer is way too full-bodied to be a golden ale).

Hitachino Nest Espresso Stout: Let us espress-o our selves.  This stout is available at just a few places in the area (Belmont Station, By the Bottle).  It is simply yet another Hitachino beer to die for.  Kiuchi Brewery in Ibaraki, Japan began with a base recipe of one deep, dark Russian Imperial Stout for this one and employed a large quantity of espresso beans in the boil to acchieve an opaque, brown-black, robust, super chocolaty sipper.  Abysmally dark and roasted with a bold chocolate, dark fruit character, this beer finishes with a hint of smokiness and charcoal.  One of the best coffee beers on the planet that must be experienced.