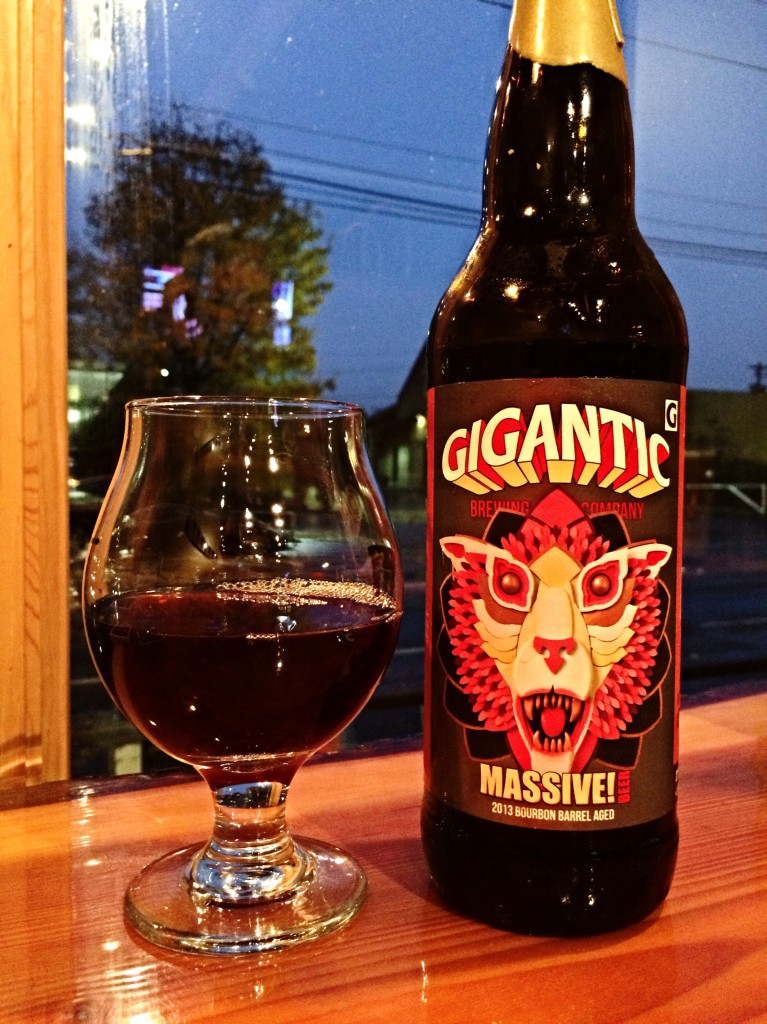 Back in May of 2013 to celebrate their one year anniversary, Gigantic Brewing offered up their first barleywine and their 9th bottle release, MASSIVE!, to much fanfare. At this same time Gigantic decided to put a batch of MASSIVE! into some bourbon barrels to give this big, bold 12% ABV barleywine some barrel aging. The delightful result is 2013 MASSIVE! Bourbon Barrel Aged Barleywine.

On Saturday, December 6th, Gigantic Brewing will release both  2013 MASSIVE! Bourbon Barrel Aged Barleywine as well as this years MASSIVE! Barleywine at the Gigantic Taproom & Champagne Lounge in Southeast Portland.

The taproom will be open from Noon to 9:00pm on Saturday. Both versions of MASSIVE! will be available on draft and for sale to go in 22oz bottles. 2013 MASSIVE! Bourbon Barrel Aged will sell for $20 bottle and will only be available at the taproom. Don’t delay as there are only 100 cases for sale. 2014 MASSIVE! Barleywine will sell for $12 bottle and will see limited distribution.

Gigantic Brewing describes their MASSIVE! Barleywine as always “one malt boiled for at least nine hours in the direct fire kettle. The boiling creates maillard reactions that caramelize the wort, resulting in toffee and caramelized sugar malt flavors and a ruby red color. The evaporation over the long boil increases the sugar content resulting in higher finished alcohol. The long boil is inspired by brewers in the Midlands of England who would boil their barleywine ales for longer times to intensify their flavours and colours.”

We were fortunate to be able to sample the 2013 MASSIVE! Bourbon Barrel Aged Barleywine over the Thanksgiving weekend. After having spent 20 months in various bourbon barrels before being blended and bottled, the finished beer is one that is sure to delight the most discriminating barrel aged beer fan. Made with Thomas Fawcett floor malted Halcyon Pale Ale Malt – Halcyon malt is considered to be one of the last remaining traditional English pale malts. Finished with Mt Hood and Willamette hops and sits at 13.5% ABV.

2013 MASSIVE! Bourbon Barrel Aged Barleywine pours a deep opaque black with a slight red hue. The very little carbonation in the bottle allows for an initial big, bold taste that goes down quite smooth. There’s a touch of warmth from the alcohol in the back of the mouthfeel. We feel that this beer will continue to mature quite nicely over the next few years but as with all beers, once should enjoy this while its freshly bottled. As Dan “TheHopfather” Culver states, “Its Massively delicious!”

Fortunately the brewery will be offering this beer on tap during its release on Saturday at their taproom. This will be a great opportunity to sample this beer before deciding on how many to set aside in your cellar for aging. 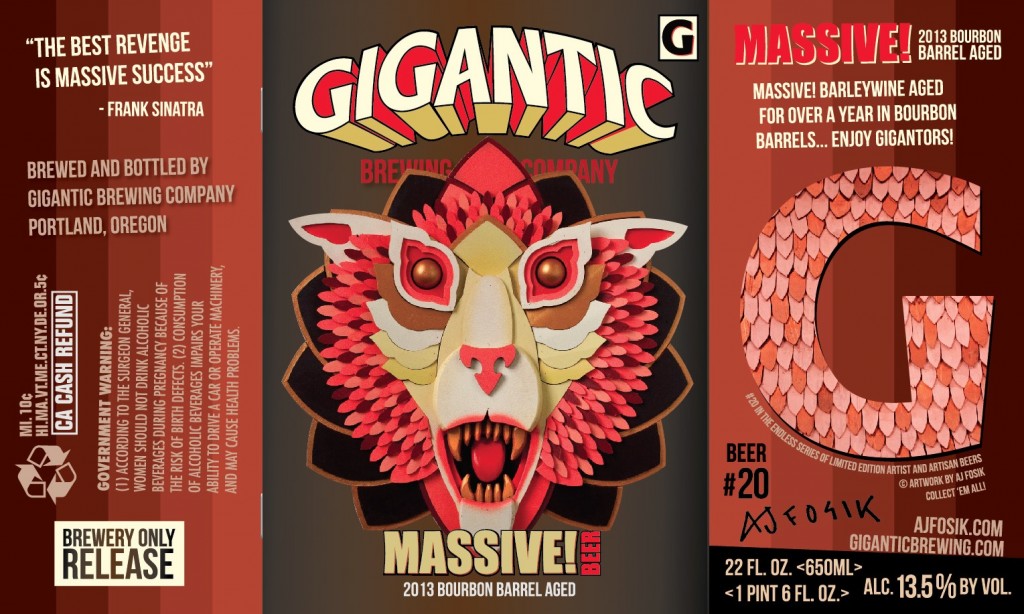 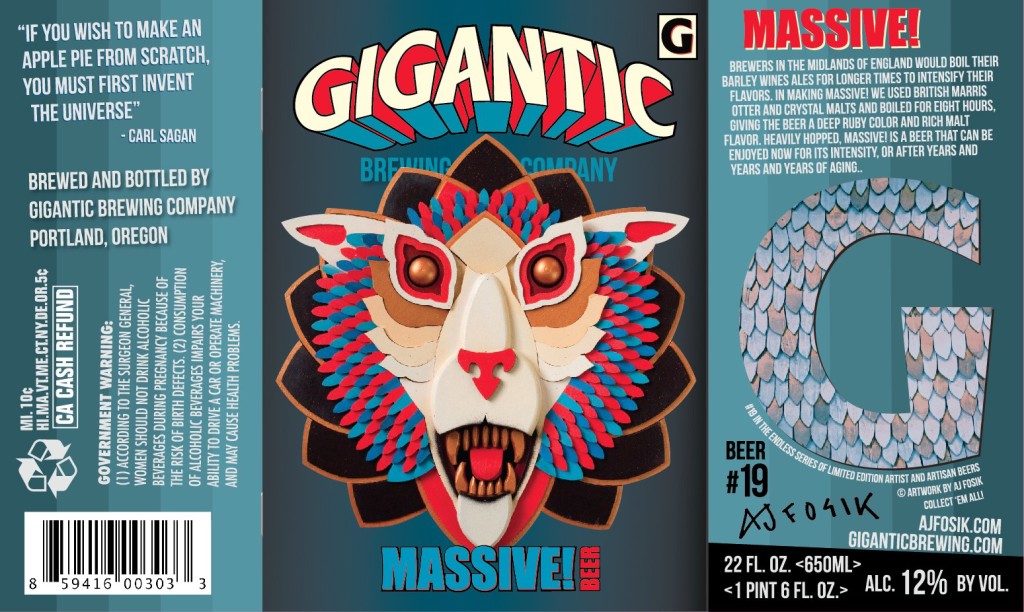 As with all of the Gigantic’s labels, they are designed by various artists with the freedom to deliver what they envision the beer to be. As with the original MASSIVE! Barleywine, the two new bottles for sale are also created by Portland, Oregon artist AJ Fosik. The release will feature the unveiling of the art piece special made by Fosik for the 2014 MASSIVE! label. AJ Fosik creates intricate, vividly colored three-dimensional pieces that reference folk art, taxidermy, and cultural ritual. Fosik’s wall pieces and freestanding sculptures of anthropomorphized animals are carefully crafted from hundreds of pieces of wood that he cuts and paints individually by hand. Once the basic forms are complete, he adds threatening teeth, claws, and eyes to give the objects an intimidating presence.