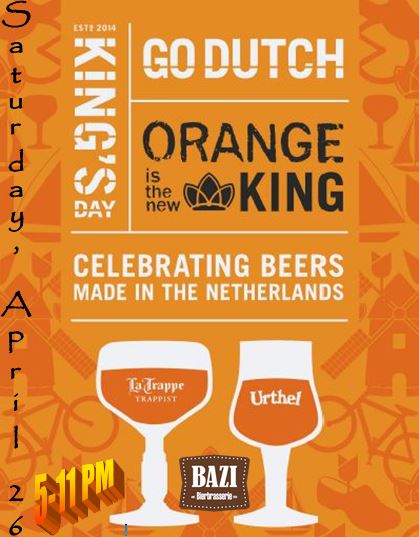 On Saturday, April 26th, celebrate the Netherlands King’s Day at Bazi Bierbrasserie from 5:00 to 11:00pm. Bazi will be pouring La Trappe and Urthel to ring in King’s Day.

At the end of April every year, the Dutch will now celebrate their King during Koningsdag. Originally known as Queen’s Day, now King’s Day is a day of parties, orange clothing and yard sales!

On Saturday, Bazi is encouraging patrons to wear orange, the color of royalty, and come experience a special Dutch tasting tray including beers from two famous breweries: La Trappe and Urthel.

Urthel’s world-class beers are designed and brewed by Hildegard Van Ostaden, and the artwork and packaging are creative masterpieces of her husband, Bas. Since autumn of 2006, all of Hildegard’s beers have been produced at Koningshoeven in Tilburg, Holland.