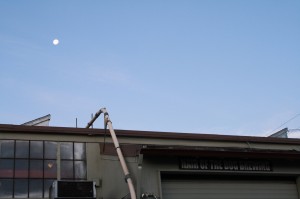 Arrived at the Hair of the Dog Brewer as the sun made its way over the Cascades to the east.  The moon was still big and bright in the sky and the air was crisp and filled with the anticipation of a handful of souls waiting for their bi-annual shot at Alan Sprints’ delicious cellarables.

As I parked around the corner from the brewery, the first person I encountered was a lad named Joe.  Joe explained that he is typically an early riser and had no problem rising to the occasion.  However, he was on his way out begrudgingly because, as he explained “I just wanted to get some Doggie Claws.  I didn’t come for the Cherry Adam.”  Well, rules being rules, Joe was told he would have to wait until 10AM like everyone else.  He had some errands to run and decided he’d bail out and try his luck later on.

7:15AM The Early Tailgaters

Around the corner a small group of anxious people were sitting in or standing near folding chairs.  Everyone said hello and I asked who had been there first.  Apparently is was a gentleman named Adam.  Fitting.  Adam had traveled from Long Island, New York specifically for this event.  He had attended the Abyss release event the night prior at Deschutes and calmly was waiting for his shot at some of his favorite Hair of the Dog brews.

Met with Cynthia and Jon, two beer enthusiasts who made the pilgrimage from San Diego. Waiting merrily near the front of the line, the jovial couple had visited the brewery a year prior and been graciously given a private two-hour tour tasting by Sprints on New Years Eve.  Another reason to love Hair of the Dog. “Alan let us thry the Cherry Adam last time we came” said Jon with a wide smile. “We had to come back! We’re grad students (at UCSD) and usually don’t get up before 10AM.” Cynthia offered me a vegan don’t from Voodoo Donut.  It was clear this was going to be a good day.

Three guys, Tom, Brandon, and Alex, who made the drive down from Seattle poured a growler of Diamond Knot IPA.  Great way to start your day.  We talked about the great beers of Portland and Seattle, mildly debating on which city had better beers.  They mentioned reading Brewpublic and liking it.  I blushed and sipped my IPA. Tom said the three visited Ron Gansberg at the Raccoon Lodge the night before.  Brandon said Ron was a “mad scientist.”  After that they “said fairwell to the Green Dragon.” and after their HOTD sale, were planning on going to Deschutes, Bailey’s, and Higgins. When asked what the primary reason in waiting in line, Brandon said “Our main motivation is Dave.   About 100 raffle tickets were given out early to faithfuls.  12 lucky people would win the right to buy a 1995 bottle of the 39% Icebock for $80. Another six winners would get a free t-shirt.But Cherry Adam is going to be good, too.”  Brandon continued “We have to get back (to Seattle) tomorrow because Alex has Seahawks tickets.”

7:45AM Beers and Breakfast

The HOTD crew began with breakfast on their outdoor grill, preparing sausages and eggs to the livening crowd that had now grown to approximately 25.  Derek (aka DA) from Beer Around Town showed up with some killer Midwestern beers he recently acquired in a trade.  A Boulevard Saison-Brett (from the Smokestack Series) was poured and in a whirlwind, several more people showed up and several more hard to find, noteworthy brews were opened and shared.

Breakfast was being served to approximately fifty or so people.  The sun was a bit warmer and the life of the crowd was elevated to a higher level.  A Surley Darkness made its way up the line from a guy named Theo. The generousity of the people was amazing.  A table surfaced and was placed next to the Hip Chicks Do Wine building across the street.  Several rare and interesting bottles appeared.  Some notables included Upland Blackberry Lambic, Alpine Ichabod, Midnight Sun Berzerker, Terrapin Roggin Rye, Founders Kentucky Breakfast Stout, Fred From the Wood, Heavy Weight Wee Whale (now defunct), 2005 Deschutes Mirror Mirror, Firestone Batch 1000, and even a Three Floyds Dark Lord.  The generousity was uncanny to say the least.  Before the doors opened to sell the Hair of the Dog brews, a beer fest had errupted outside.  It was to rival most any around. In what seemed like the blink of an eye, the sun was bright and the line was around the corner and extending to the next street.