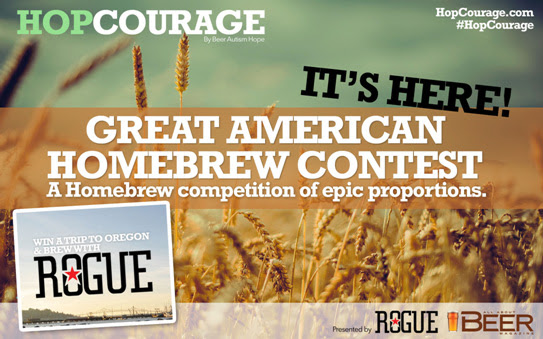 The Hop Courage Great American Homebrew Contest rewards the nation’s finest homebrewers with feedback from top-tier judges and incredible awards, including cash prizes, premium brewing equipment, beer gear, national press coverage and the grand prize — a trip for two to visit Rogue Ales in Oregon where the winner will visit Rogue’s brewery on the Oregon Coast, Rogue’s hop farm in Independence and Portland where they will brew their winning recipe with a Rogue brewer! The resulting brew will go on tap at the legendary Green Dragon Pub in Portland, Oregon!

Rogue Ales & Spirits is proud to team up with All About Beer Magazine and the Beer Autism Hop movement, an organization that supports the autism community and charitable causes, to announce the inaugural Hop Courage Great American Homebrew Contest.

Top tier BJCP judges will taste entries from American homebrewers from all 50 states and choose winners in more than 28 categories. An overall grand prize winner will also be chosen early in 2015.

The grand prize is a trip for two to Rogue Ales in Oregon and tour the brewery in Newport, Rogue Farms in Independence and the Rogue Ales Public Houses in Portland. Not only that, he or she will brew their award-winning recipe with a Rogue brewer. The resulting beer will go on tap at The Green Dragon, one of Portland’s favorite beer bars.

The competition not only recognizes America’s finest homebrewers but it also benefits the autism community and charitable causes within craft brewing through Beer Autism Hope.

Registration is $25, a $5 discount off the regular registration fee, before October 31. Each additional entry will cost $10. Standard registration ends January 31, 2015 and late registration will end March 10, 2015. For more information on the competition, Beer Autism Hop and how to enter, visit HopCourage.com. Contact Chris Thomas (connect@hopcourage.com) with any additional questions. And follow @LanceKnowsBeer on Twitter and like Lances Brewery Tour on Facebook for the latest updates.

You can also Tweet or Facebook your own updates about local homebrew entrants using hashtag #HopCourage. Best of luck to all the entrants and we hope to see them next year in Oregon. Cheers!