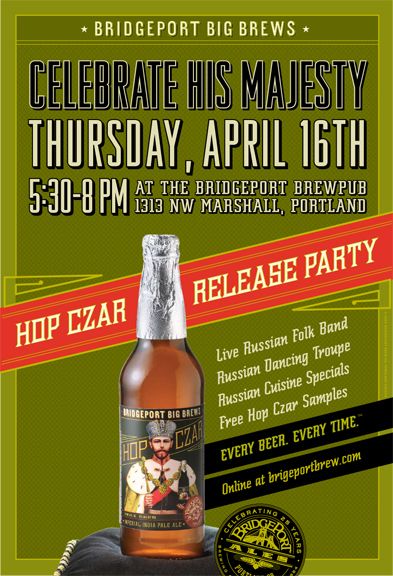 …and Other Ideas for Hoppy Beer Names

BridgePort Brewing Company just bottled up their seasonal DIPA, and has announced that they will again be having a special release party at the brewpub to celebrate.  Hop Czar will be released this year on April 16.

BridgePort will host a Hop Czar release party Thursday, April 16 from 5:30-8 p.m. at the BridgePort brewpub + bakery in the Pearl at 1313 NW Marshall St. Free and open to the public, attendees can enjoy Russian folk dancers and listen to live music courtesy of Portland based musical ensemble, Chervona. To celebrate the re-release of this favorite IPA, BridgePort’s brewpub + bakery will also be serving free samples of the limited edition Big Brew and feature a special Russian inspired menu and a signature beer cocktail.

BridgePort’s Hop Czar Ale will be on tap at BridgePort brewpub + bakery, BridgePort Ale House and at select bars and restaurants around Portland. With 1,000 cases produced, this limited edition brew will also be sold at retail grocery stores throughout Oregon and Washington while supplies last.

Triple-hopped, just like Miller.  JK.  Last year’s Czar was fantastic.  Rich, floral and full of oomph! It poured a bright thick orange-amber body with a healthy white head. Bitter, citrus, grapefruit nose. Lots of great hoppiness and a rich malty spine. Last year I said “It’s great to see that BridgePort finally made an IIPA and this one is wonderful!”  Yum!

That’s all I got for now…