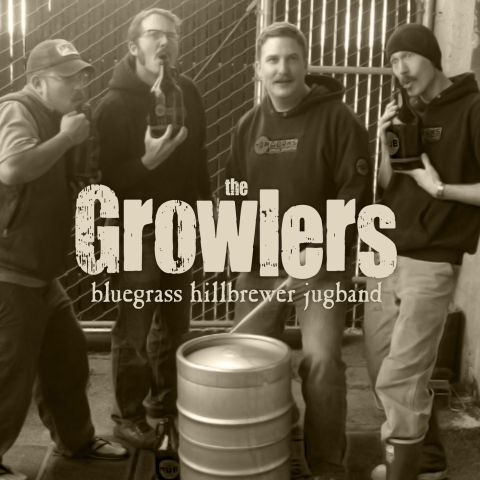 PORTLAND, OR – April 1, 2010 – The brewing team at Hopworks Urban Brewery is proud to announce the release of their newest brewery band incarnation, The Growlers. The band’s first album entitled “Bluegrass Hillbrewer Jugband” will be released today, Thursday April 1st, and will be available at better beer bars and bottle shops.

Keg Drummer Ben “Dr” Love talked about the bands formation, “After the huge success of last years albums, “Southern Highway – Ramblin’ Band” and “Ocho Rodriguez and the Three Amigos – Banda Banda Banda”, we decided it was time to develop a new sound and really “explore the studio space”. Growler player Matthew “Speck” Speckenbach said of the band’s choice of bluegrass jugband, “While none of us are actually from the backwoods, we’ve all been known to down a number of growlers… then blow into them”.

The band’s sound is best described as classic bluegrass with some serious blowin’ thrown in, a little hillbilly, all finishing in an endless jam. The bands first single, “64 Ounces To Freedom” hits AM radio stations today followed up by their second single “Drinkin” on Wednesday April 7th. “It’s your typical one-two punch. Knock em’ out”, said A&R man Butch Little. The album also includes a cover of The Folksman song “Never Did No Wanderin’” with an extensive jam at the end. “The song is 48 minutes in length”, says growler player Christian “El Hefe” Ettinger, “It starts with your typical Never Did No Wanderin’, then leads into a growler solo by me, to a growler solo by Speck, followed by a growler solo by Jaime, after that it drops into an extensive keg drum solo by Ben, that’s when the rest of us get a drink (out of our jugs – to drop the register) then there’s a four part vocal harmony followed by some really loud blowin’ and a few more solo’s. It’s epic.” Jaime “Ocho” Rodriguez said of the group, “This goes to eleven!”