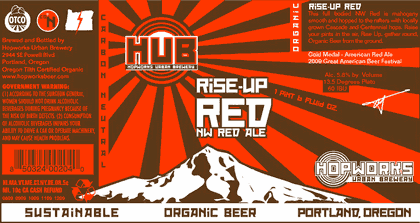 Hopworks Urban Brewery’s (HUB) is releasing its award-winning Organic Rise Up Red ale beginning on Monday, April 4. The Pacific Northwest Red is available on draught and 22 oz. bottles at select Oregon, Washington and British Columbia bars, pubs and stores. The seasonal release won a gold medal at the 2009 Great American Beer Fest in the American Style Red Ale category and was one of the first beers the brewery produced.

Organic Rise Up Red is a classic Northwest red ale featuring a rich mahogany color while organic malts provide a mild caramel sweetness and smooth, bready flavor.  An ample dose of locally-grown Magnum, Cascade and Centennial hops delivers a floral and slight citrus flavor.  The beer checks in at 60 IBUs and 5.8% ABV.

Hopworks Urban Brewery (HUB) is Portland’s first Eco-Brewpub offering world-class beer and fresh food in a relaxed and communal atmosphere.  HUB’s 20-barrel brewery produces 6,400 barrels of beer a year for their brewpub and distribution in Oregon, Washington, and British Columbia.  HUB incorporates a range of sustainable practices in their operation and makes every effort to protect “our” future with a thoughtful alternative.  Hopworks is 100% renewably powered and “cradle to gate” carbon neutral.

The Hopworks brewpub features ten different organic beers on tap and two cask ales at all times.  The brewpub is located at 2944 SE Powell Blvd and is open Sunday through Thursday from 11 a.m. to 11 p.m. and Friday and Saturday from 11 a.m. to midnight. In early summer, Hopworks will open its second location, Bike Bar in North Portland, expanding the company’s love of beer, bikes and the environment