…and other unhopped beers about town.

As you may or may not know, a gruit (or grut) is an herbal mixture used to flavor beers.  Often beers with such a mixture bear the name themselves.  Predating the use of hops as the primary spice herb for beer, it has been written that gruits were phased out in Europe as universal grog between the 11th and 16th Centuries.  In 16th Century England, a distinction was made between ale, which was unhopped, and beer, brought by Dutch traders.  Nowadays, the term “ale” is used to describe a brew made with the top-fermenting yeast, rather than it being unhopped.  Commonly in possession of some slight narcotic effects, the herbs used for gruits throughout Europe included yarrow, sweet gale, mugwort, heather, and Marsh Laborador Tea. Other adjunct herbs utilized include ginger, caraway, and marjoram.  In Finland, a brew known as sahti employs twigs and juniper berries and twigs in place of or addition to hops, and sometimes uses bread in place of malt.  This phenolic, banana-scented brew lives on today, though traditional gruit is mostly defunct.  However, since the microbrew revolution in the 1990s, a variety of unhopped beers have made a comeback.  And, while still not commonplace, some amazing examples exist today and are available for your consumption right here in the Brewpublic. 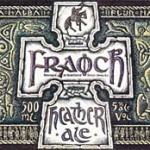 Fraoch Heather Ale: This beer’s rich history is nearly as impressive as the drink itself.  Its large scale revival occured in the mid-1980s when Scottish brewer Bruce Williams employed the aid of a Gaelic speaking islander to translate an old family recipe for “Leann fraoich” or “heather ale.”  Archaeologists have found evidence of fermented alcoholic beverages made from heather flowers as early as 2000 B.C. Following centuries of war, Scotland was forced under English rule in the 18th Century.  At this time, several facets of Scottish heritage were lost to ordinances such as the banning of bagpipes, the forbidding of the Gaelic language, and for brewers, an “Act of Union” meant the abolition of brewing.  The Act stated that only beer made from malts and hops was allowable under such rule.  In Gaelic, no word for “hops” existed. Williams’ efforts to preserve a vital aspect of the faded culture in the late 20th Century resulted in the abundance of malty sweet and spiced herbal delight.  Also making use of sweet gale, the light amber brew possesses a flowery, peat essence and a dry vinous finish. This 6.5% ABV beer is meant to be enjoyed slightly chilled and pairs well with baked and stewed foods.  Today, William’s line-up of beers such as the Gozet (Gooseberry), Kelpie (Kelp), Alba (Pine), and others make up an array of flavorfully crafted herbal brews.

Jopen Koyt:  Often referred to as a “traditional ale”, this Dutch gruit has been brewed by DeProefbrouewerij in Lochristi, Belgium since 2006.  Before then, it was a product of Van Steenbergebrouewerij.  This deep malty amber-brown bodied brew’s recipe dates back to the early 15th Century in a time and place that hops were not used. This “Golden Age” of Dutch brewing had many guarded gruit recipes from villages around the area.  In Haarlem, where this beer has been made, preserved public records indicate the social significance and regard for this tasty brew. With oats, wheat, and barley added to the mash, the Koyt is seasoned with distinct herbs for balance.  With a gingery root nose, the complexity of this mystical beer is unfurled further upon each sampling.  Today’s version is a richer, darker rendition of the beloved Koyt.  Herbal anise spicy notes linger on the tongue and the 8.5% ABV body makes for a worthy cellarable companion. 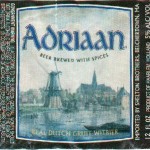 Jopen Adriaan: Another gruit from Jopen, the Adriaan is a witbier with a twist. Light crisp and herbal, this Haarlem, Netherlands brew is named for the ancient windmill depicted on the label.  The historic windmill has laid in ruins in the center of town for centuries.  Proceeds from beer sales are being put toward restoring it.  The beer, on the other hand is anything but dilapitated.  Fresh, orange peel essence rises from Adriaan’s hazy orange body and small bubbly white head. Great aroma of floral herbs and hints of citrus, apple, and vinegar complement a carbonic, effervescent mouthfeel, and moderate 5% ABV make this a great summer quaffer. 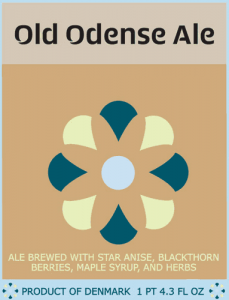 Nørrebro Old Odense:  Danish brewer Anders Kissmeyer of Nørrebro Bryghus in Copenhagen, Denmark made this collaboration beer with the imaginative brewer Sam Calagione of Dogfish Head Brewing of Milton, Delaware. Nørrebro is the common name of the multi-ethnic society located beyond Copenhagen’s historic city center. Kissmeyer and Calagione’s beer is a traditional Dane-style brew that they discovered on an obscure web page with a translation of a 15th Century gruit ale recipe from the town of Odense. The beer’s ingredients include pale and dark barley malt, oats, fine syrup, smoked dark syrup, fir branches and fir bark, wood sage, hyssop, blackthorn berries, woodruff and star spice. The beer is quite sour due to the potent “herbal juice” hand squeezed into the kettles during the boil. The beer’s commercial label describe the beer as an “ale brewed with maple syrup and herbs.” It is said that the Odense style is somewhat like a Belgian Lambic beer, but defies all categories of commonly known beer.  It’s hazy orange body and small off-white head reveals an almost indescribable amalgamation of flavors ranging from tart to herbal, to sticky sweet. If you get the chance to try this beer, certainly do not pass it up.

Roots Organic Gruit Kolsch: The imaginative brewing minds of Roots Organic Brewing
in Portland, Oregon conceived this flavorful summer solstice release (sorry if you are reading this in the off-season).  Conceived by owners Jason McAdam and Craig Nicholls, this light copper-golden beer is “a look back to the time before hops were used in beer.”  According to lead brewer Chip Conlon, this unique beer is a  “blend of lavender, grains of paradise, sweet gayle, sweet orange peel, chamomile, and mugwort” that replace the hops for a subtle and complex herbal, slightly spicy palate over a crisp. effervescent, refreshing pale Kolsch.  Conlon also says that the Kolsch, a twist on the traditional Cologne, Germany refresher, makes use of these fresh herbs in additions to the boil, much like a “normal” beer would with hops.  A sip of Roots’ Gruit Kolsch is a taste of summer and another great example of why Portlanders love craft brew.

Roots Organic Burghead Heather Ale:  Unique from nose to finish, this hopless wonder beer seems to vary somewhat from one batch to the next.  A bright, luminescent golden-yellow hue with no head, the Burghead starts off the palate sweet while finishing out quite dry and piny. A popular brew of yore, often in the form of honey wine, the Roots version also uses organic honey with the heather tips.  The certified organic beer is always on tap as a year-round offering at the brewpub and the brewers promise it to be the most interesting beer you’ve ever had. Head over to Roots right now and have one!