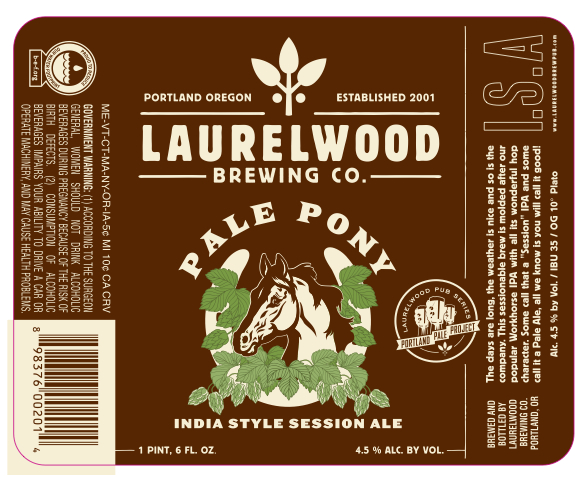 Laurelwood Brewing is ready to release the next beer in their Pub Series, Pale Pony India Style Session Ale. Yes, Laurelwood is joining the Session movement with this 4.5% ABV beer.

We here at Brewpublic appreciate the style name of this beer, India Style Session Ale. Like many others we do appreciate these Session style beers but way too many breweries call them India Session Ales. You’d think here in the Pacific Northwest, where many championed the Cascadian Dark Ale name over the ambiguous Black IPA, we would have learned that there was never a Session beer shipped to India.

Well Laurelwood is doing the style correct with their style name. One will understand that its a lower ABV beer but with a stronger hop profile. Job well done!

“The days are long, the weather is nice and so is the company. This Summer Pale ale is modled after our popular Workhorse IPA, but is low in alcohol and, of course, high in hops. Some call that a “session IPA” some call it pale ale, all we know is you’ll call it good!” Sounds like a winner to us!

Make sure to seek out Laurelwood’s Pale Pony India Style Session Ale. You’ll be able to enjoy a few of these during the long, summer days ahead!