I saw this article in a business newspaper ( Les affaires 14-20 November 2009 ) when I went to the bank to meet my financial counsellor. It is quite rare to see people you know in those kinds of newspapers, so reposting it on a blog dedicated to beer would allow reaching a better public. 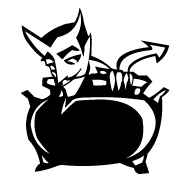 Here is the translation (my translation): Microbrasserie Le Trou du Diable. Create a distinctive enterprise that Shawinigan citizens could be proud of: That was the first objective of those five investors of the Trou du Diable microbrewery. They won their bet! Named in reference of a curious shape of the city waterfall which confers a unique character to the city, the cooperative employed 20 persons and had a fast development. They will soon begin their third development phase. Now known and recognized throughout their region, they constantly look for the quality of their 40 exclusives beer recipes, meals privileging local terroir products and the cordial ambiance of the brewpub. The next project, a major production of barrel oak aged beers, will allow exportation to Western Canada and United States.

I’ve talked few times of Le Trou du Diable in my earlier posts. I should visit them more often. Nevertheless, behind this, there is something probably as important the award; peoples. The brewer isn’t alone! Breweries are businesses that provide jobs. Brewmasters, directors, managers, chefs, waiters and bartenders are part of this industry. It directly injects incomes to the community.

We have about 70 breweries in our province. Those young businesses provide new jobs and contribute to the economy. Most of the breweries (personal observation) are located in the downtown part of the cities and their implantation usually involves building renovations. It revitalizes, diversifies and gives a new breath to the local economy. A lot of them promote culture by according a scene to small music bands and offering theirs walls to visual artists. They also sponsor local festivals with their products, and educate population to a wonderful product that is called beer.

Next time you will visit your local brewery, remember that you’re taking part of the local economy and you support the hard work of devoted peoples. Awards and recognition is important, but it is sure that behind awards, your visit is probably what they prefer.