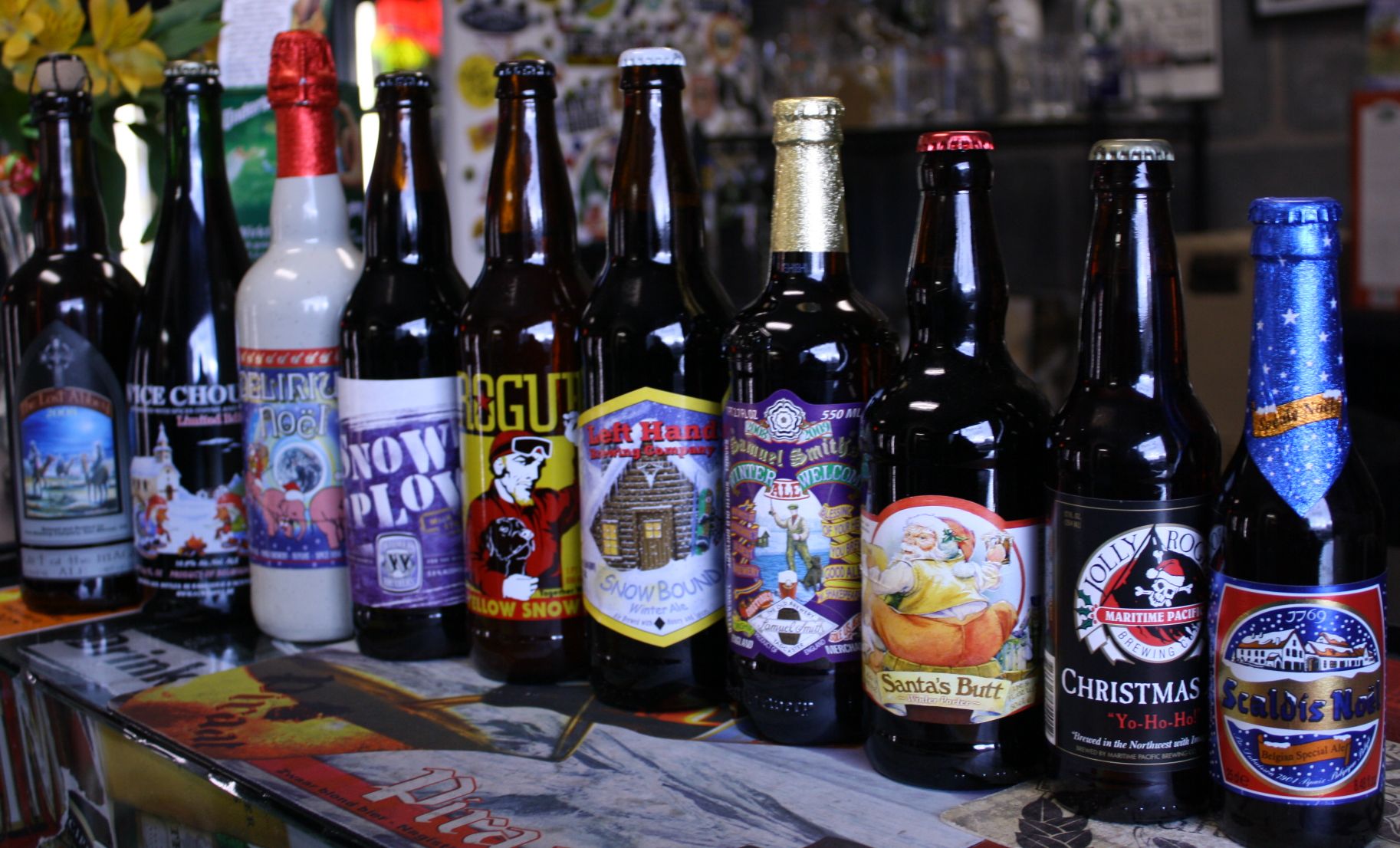 Like snowflakes falling from the heavens, craft beers, despite some commonalities, come in seemingly infinite varieties.  Around the globe, there are several mouthwatering brews decorated with unapologetic stalwartness and cozying gusto. As we snowshoe into the midst of the festive season, there are many winter wonderbrews to rosy our cheeks and warm out hearts.

Scaldis Noel: This Belgian holiday ale (aka Bush de Noel) appears relatively light in color for a winter warmer yet the flavor is ridiculously zestful. Within the caramel body and under the explosive head, a delicious spiciness of clove and nutmeg with hints of orange peel and pepper.  A fan favorite at the Holiday Ale Fest, the complex intermingling of the malt, yeast, and plethora of spiciness plays like a Christmas cookie in a bottle.

Maritime Pacific Jolly Roger: “Yo-Ho-Ho!” A Pacific Northwest winter warmer brewed with English influence.  Lightly carbonic with an orange-amber body with bready, caramel, nutty yeastiness and a healthy pinch of piquant hops that masks an underlying potency, 9% ABV. The Jolly Roger is “Brewed in the Northwest with Imagination.” Yaarrrghh!

Ridgeway Santa’s Butt: This 6%  ABV winter porter is quite robust, especially for traditional English standards.  A handsome brown-black bodied beer with a soapy off-white head, the mildly carbonated body reveals smokey, mildly sour, toffee notes.  The term “butt” refers to a barrel that holds 108 imperial gallons. This tergiversation fits in to Ridgeway’s mischievously palatable pints, such as the Bad Elf series and Rudolph’s Revolt. Santa’s Butt has hints of chocolate milk, toffee, and cinnamon.  Very subtle and enjoyable, one is encouraged to grab a Santa’s Butt today!

Samuel Smith’s Winter Welcome Ale: Pouring a clear amber body, this is an unassuming winter ale, that has been enjoyed since before the extreme Americans had their way with the festival ales. Like other English ales, the yeast imparts a caramel, nutty flavor that adjoins to a hint of honey and figs quietly lingering in the background.  At 6% ABV, this Samuel Smith brew is extremely well balanced, finishing with a soft fruity, mild metallic snap and a lingering yeasty impression.

Left Hand Snowbound: From the Longmont, Colorado brewery with more brands than any other craft brewery other than Samuel Adams, comes this excellent spiced strong ale.  Using ground nutmeg, whole cloves, crushed cinnamon, orange zest, and chopped ginger, the heart of this deep dark (8.6% ABV) chestnut brew is an especially savory flavor of honey and the sinewy malts.  A medium-to-dark body that is softly carbonated, accentuates the pinch of Saaz and Northwest Brewer hops and  choice water from the area. Having a supply of such a winter warmer welcomes the notion of finding oneself snowbound.

Rogue Yellow Snow: Not at all yellow, the color is more orangey. Formerly known as the Integrity Ale, the Yellow Snow is a floral IPA brewed with high alpha Amarillo Hops for a grapefruity-piny punch. At 6.2% ABV, drinking a bottle of this beer won’t get you too pissed, but it will make you happy.  Now available in 5 liter mini-kegs, the lemony citrus flavors of this beer work well with the soft, creamy mouthfeel and dry, satiating finish. This brew could work if released any time of year since there’s no spiciness other than the hops.  Very nice.

Widmer Snowplow: Here is one of Widmer’s few dark beers.  A ingredient-oriented 5.5% ABV milk stout with coffee and chocolate, Snowplow goes down smoothly thanks to the work of the Oregon Brew Crew who invented this beer as a part of the Collaborator Series. A dark brown body with a medium beige head, the ‘Plow has a generous hop punch without overwhelming the palate. Molasses and chocolate milk flavors linger on the tongue.  Available in 22 ounce bottles only this year, it is rumored that this is the last year for this beer, so grab one while you can.

Delirium Noel: Pink elephants pulling Santa’s sleigh?  This honey-ruby hued beer holding a soft off-white head possesses a nose of syrupy candy sugar and mild spice. A quite complex carbonic beer, the beer has notes of a variety of wonderful essences including holiday bread, raisins, cinnamon, white pepper, burnt caramel, and an array of dark fruits.  At a butt-kicking 10% ABV, it is the perfect beer to share during an intimate winter evening (insert fireplace reference here).  If you’ve enjoyed Delirium Tremens and Christmas…’nuff said.

N’ice Chouffe: A limited edition 2007 bottle of this beer is unparalleled.  Not just another winter ale brewed with spices, this Belgian bomber flavored with thyme and curacao peel imparts a one-of-a-kind result. Dark brown-mahogany colored with a fluffy effervescent head, and a fruity, “berrylike” presence thanks to the play of the yeast, husky maltbill and a dose of dark candy sugar.  At 10% ABV, this unflagging fave is in a gnomenclature of its own.

Lost Abbey Gift of the Magi 2008: To say the least, Lost Abbey’s beers are very spiritual in either a demonic or holy manner (“beers for saints or sinners”).  This brew features a theme of the Three Wisemen who are depicted on the label. Here we have a 9.5% ABV dry-hopped Brettanomyces-fueled Biere de Garde with a Gold color, bittered with the bark of Frankincense, and even employed a very small amount of Myrrh.  The bottle states “We’ve left the camels on the label but added our own barnyard to the bottle.”  Scrumpdittlihumptious!

There’s a gagillion other winter beers out there worth your time and palate, so go on and get to tasting, before the snow melts, the sun shines, and you’re forced to cellar the rest til next season.  Salud! 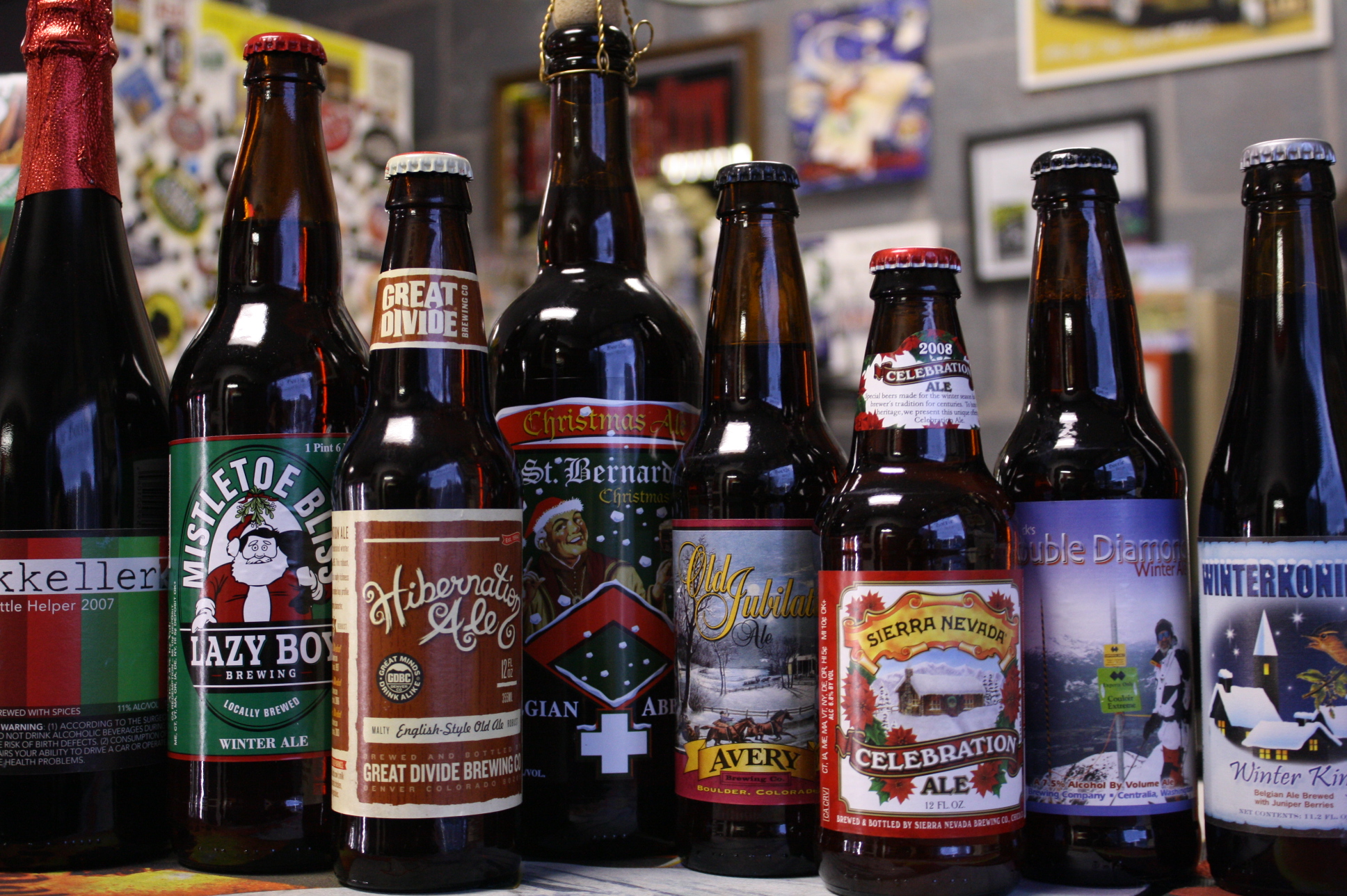