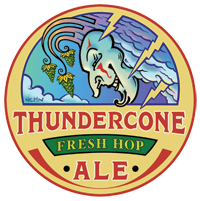 The fresh hop beer releases continue to be hitting area draft lines. McMenamins is no exception as they announce the release of Thundercone Fresh Hop Ale on Friday, September 19th at all of their locations throughout Oregon and Washington.

This year marks the 5th anniversary for Thundercone. McMenamins brewers made their way to Sodbuster Farms in Keizer to acquire 1,100 pounds for freshly picked Brewers Gold hops. Once the hops were loaded up they were then promptly delivered back to all 22 McMenamins breweries on the same day, henceforth known as “The Running of the Brewers.”

Once these fresh hops arrived at each brewery, Thundercone Fresh Hop Ale was brewed within hours. The resulting beer is said to be, “an absolute fresh hop showcase, with a smooth foundation, slight maltiness and earthy, spicy fresh hop flavor. Taste the decadence in a pint near you!”

Here’s a video clip that McMenamins put together a few years back about how they travel to Sodbuster Farms to gather the freshly picked wet hops each harvest season.