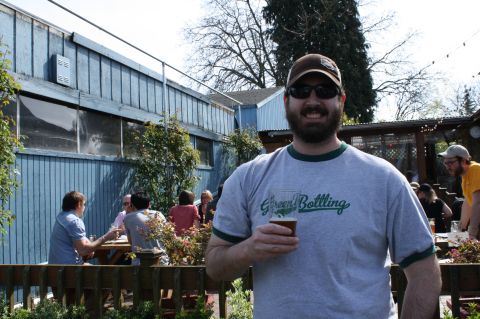 With Oregon Craft Beer Month almost here, New Old Lompoc brewer Zach Beckwith shed some light on some fantastic events happening at the NW 23rd brewpub. Beckwith has prepared a randall for an “instantaneous dry-hopping effect and subsequent super potent and fresh, hop aroma.”  Beckwith says “My plan is to run a different beer through this contraption every friday in July for Oregon Craft Beer Month.”

Further, Lompoc has a treat for all the thirsty craft beer-lovin’ Timbers fans around town. The brewpub will be hosting a special pregame party on Sunday July 10th, the same day as the Timbers match against hated rivals Seattle Sounders. This will include a firkin of Kick Axe Pale Ale to be tapped at 11AM.  Beckwith encourages “Located just over a mile from Jeld-Wen Field New Old Lompoc is the perfect place for a pregame pint (or two).”

“Also on the horizon is Saraveza’s Double IPA festival,” adds Beckwith. “I’ve stashed away the very last of our Peregrine Imperial IPA, brewed for the Sasquatch Festival back in May, and will be sending a special double dry hopped version to the fest, so be sure to look for that.”
And finally, Beckwith points out: “We are constantly cranking out a variety of seasonal and one-off brews including a number of summer lagers such as Heaven’s Helles (on tap now), an as of yet unnamed Dortmunder, and Saazall Pilsner.”
See you at the New Old Lompoc! Cheers!