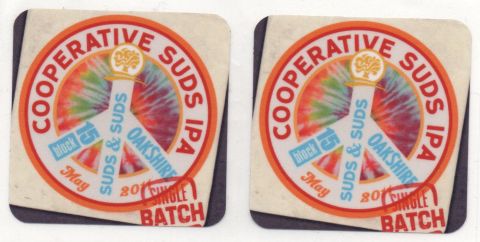 Earlier this spring two of Oregon’s best breweries – Oakshire Brewing of Eugene and Block 15 Restaurant & Brewery of Corvallis – put their heads together (pun intended) to develop a special brew for Suds & Suds of Corvallis.  Suds & Suds is a pizza joint offering the widest selection of beer in the Heart of the Valley (30 taps) as well as a laundromat (hence the name).

The beer – an American IPA – pairs superbly with pizza pies as well as an assortment of other foods ranging from burgers to barbeque, curry dishes to sharp cheddar and Gorgonzola, spice carrot cake to caramel apple tart. At 6.9% ABV and 60 IBU, this particular brew showcases Saaz, Centennial, and a newer hop, Calypso. Light bodied due to a malt bill featuring Rahr 2-row, Simpson Golden Promise, and the specialty malt Carapils, the beer is a balance of floral aromatics and pronounced pininess, resinousness, and bitterness that play well with California Ale yeast used for fermentation.

The brewers were adamant about calling this brew a cooperative effort rather than a collaborative one,; the mantra being:  “We cooperate with our friends rather than collaborate!”