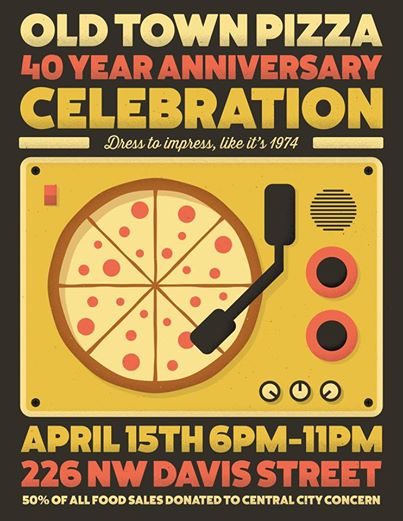 On the day many American’s fear, Tax Day, one of Portland’s landmark institutions will celebrate a major milestone. Old Town Pizza will have served tasty pizza to the people of Portland and beyond for the past 40 years.

Since opening on April 15, 1974, Old Town Pizza has been serving some of Portland’s best pizza from its original location in the city’s historic Old Town neighborhood. Complete with a resident ghost, Shanghai Tunnels and a history of playing host to hipsters from nearby and afar, Old Town Pizza uses only the freshest ingredients on signature pizza dough that is never more than three hours old.

Through the years Old Town Pizza had multiple locations in various towns throughout the Northwest. Over time these locations began to close their doors. Then a little over ten years ago, the original location of Old Town Pizza was about to do the same. This is when long time fan, Adam Milne, stepped in and purchased the struggling business.

Now 10 years later Milne has rebuilt Old Town Pizza back up and in 2008 even opened a second location at Vanport Square in North Portland. But what made this location take off is when Milne opened up a 7 BBL brewery in 2012 and then went with a new name for this location, Old Town Brewing Company. Set in the former kids play area, Old Town’s brewhouse sits alongside MLK and has recently expanded with some additional tanks that are dedicated to their IPAs. More on this later. 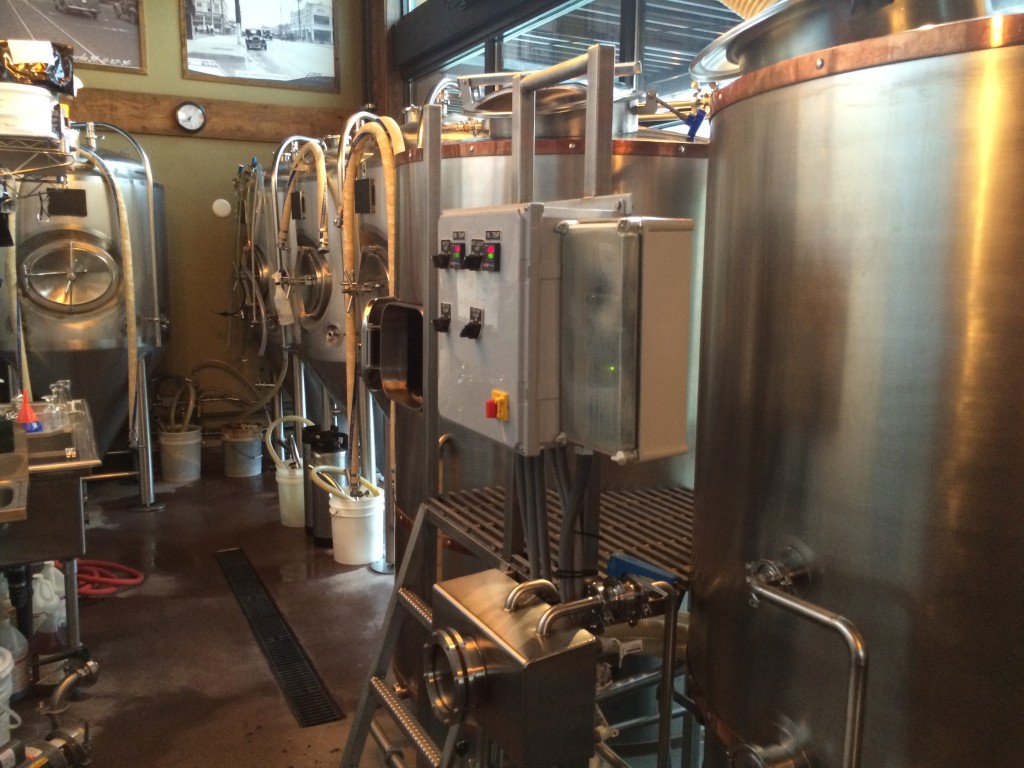 When the brewing operations began in 2012, Milne first hired Craig Nicholls, co-founder of Roots Organic Brewing, as a consultant on the project along with hiring their first head brewer, Scott Guckel. With Guckel moving on to Gigantic Brewing, Bolt Minister was brought in to head up the brewhouse. 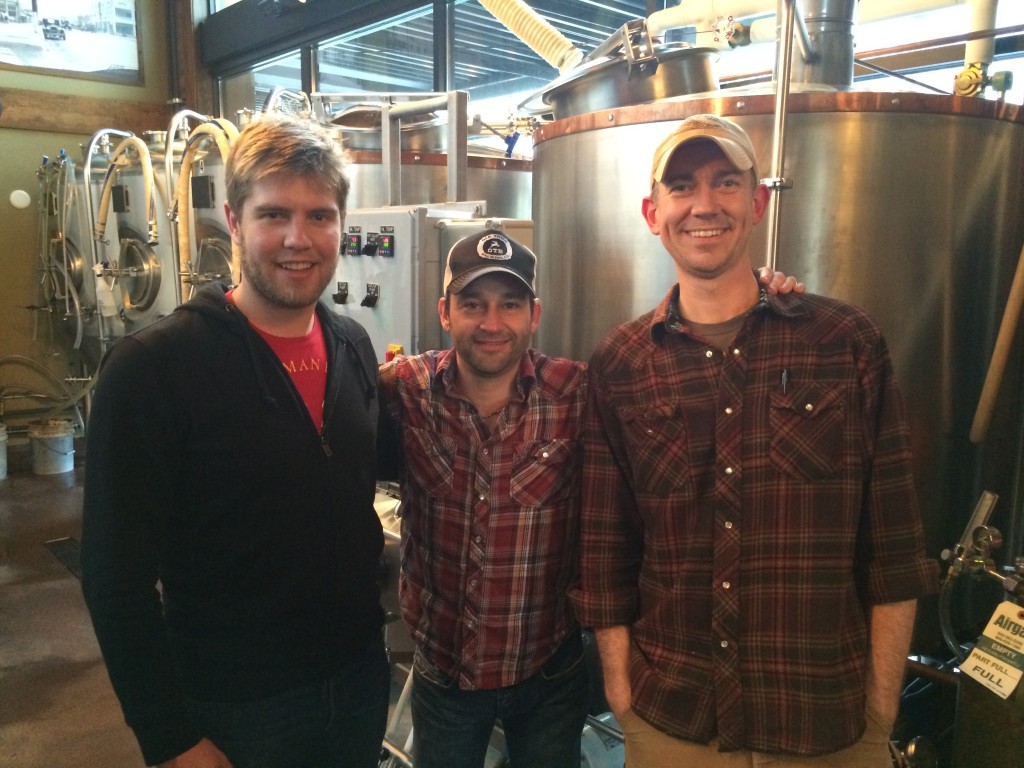 From the start of Old Town’s brewing operations, they set out to brew more approachable or sessionable beers for their restaurant patrons. Much more in the lines of what the traditional brewpubs have done over the years. Their line up of beers include: 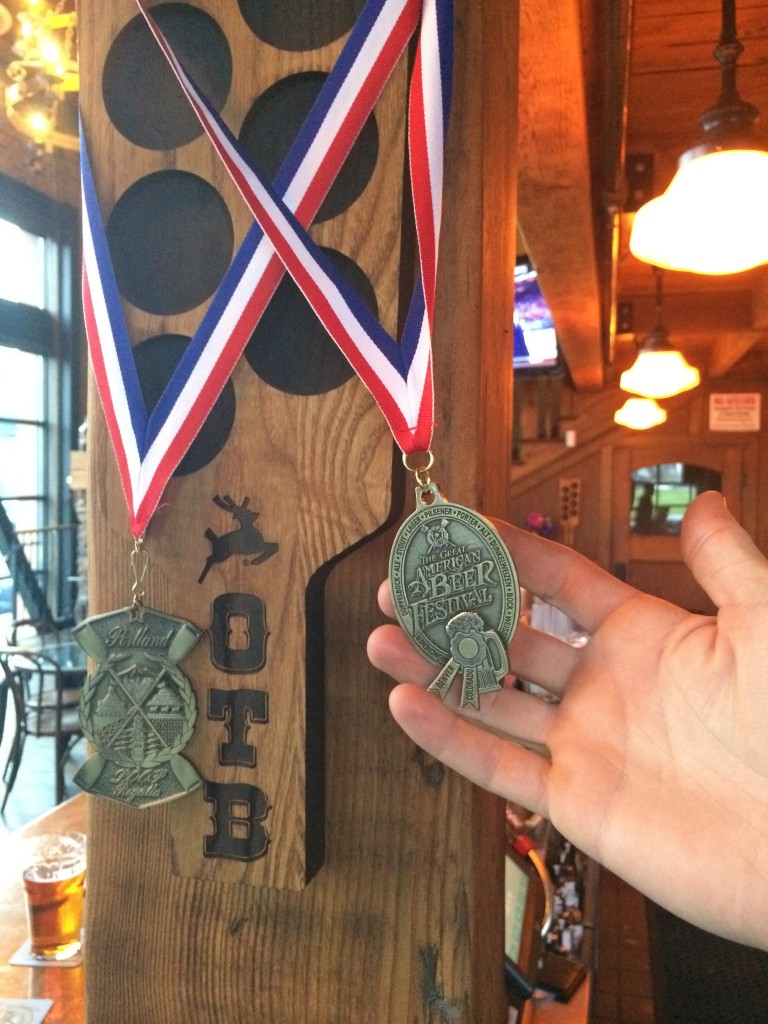 During our recent visit we were treated to a very approachable Seasonal Affective ISA. This India Session Ale from the Hop Handle offered a great up front citrus taste with enough body but not too much so you’ll be asking for another.

Then this past year Old Town Brewing won their first medal at the Great American Beer Festival. And it wasn’t any old medal; they won the Gold in the Fresh Hop Ale category for their Cents & Centsibility. This is quite the feat considering all of the excellent fresh hop beers we have in Oregon and the Pacific Northwest. We definitely look forward to what Minister and crew will put out in September!

Earlier this year Old Town has brought in another Walking Man alum, Cory McGuinness, into the brewhouse. Minister also brewed at Walking Man for a very short stint. McGuinness will bring his Siebel background to further expand the brewing capabilities at Old Town. 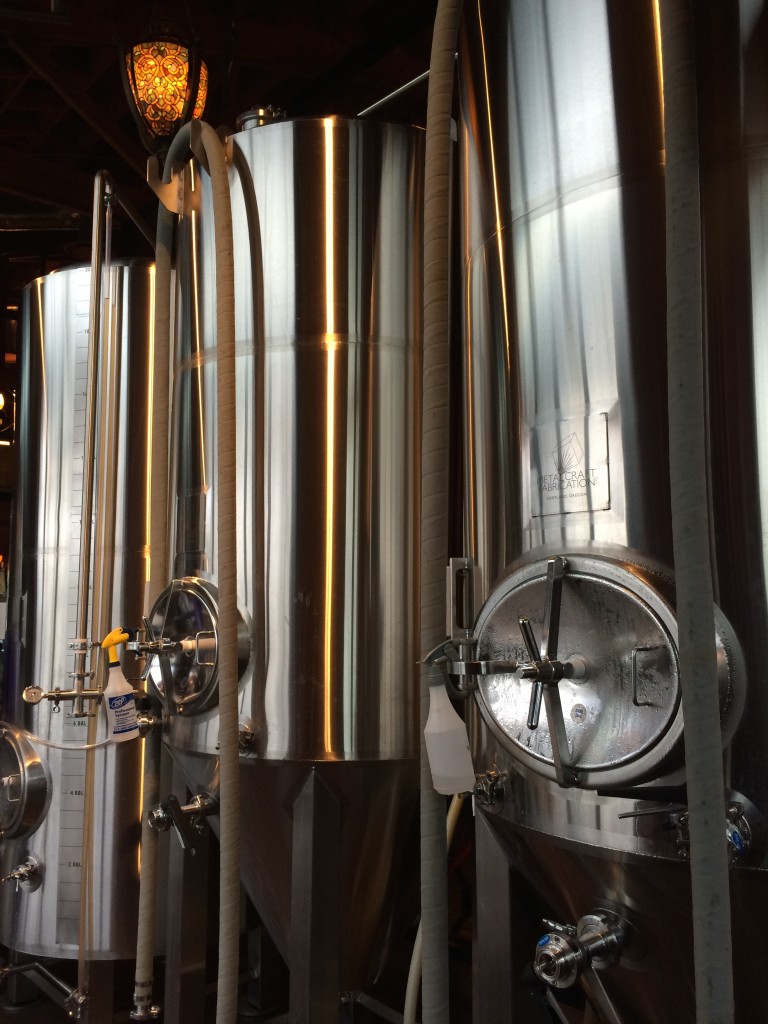 On the horizon for Old Town Brewing will be bottling. This will be their first foray into packaging of their beer. First up will be 22oz bottle of their Shanghai’d IPA. For Old Town to begin bottling is the reason the brewery added some additional tanks that are being use for their IPAs. These new tanks from Metalcraft are 15bbl tanks but were designed to be stretched to a capacity upwards of 20bbls. This will only be a blessing when they roll out their bottles in the coming months.

To celebrate Old Town Pizza’s 40th anniversary, Minister and McGuinness brewed up a Pre-Prohibition style lager aptly named Nina’s Lager. Nina is the long rumored ghost that haunts the Old Town location. This robust and full-flavored lager is reminiscent of German-style beers poured in the U.S. prior to prohibition. Using 6-Row and 2-Row Malt and corn along with Sterling hops for bittering and Mt. Hood hops for aroma, this pre-pro lager has crafty written all over it. Believe me, its very tasty!

Nina’s Lager will be tapped at Old Town Pizza’s 40th Anniversary Party on Tuesday, April 15th in Portland’s Old Town neighborhood, located at 226 NW Davis Street. The anniversary celebration will pay homage to swingin’ Old Town in 1974, a flashback to when Old Town Pizza first opened. Beginning at 6:00 p.m. you can enjoy ‘70s music, costumes and games that will create the perfect retro backdrop for craft beers and handmade pizzas. 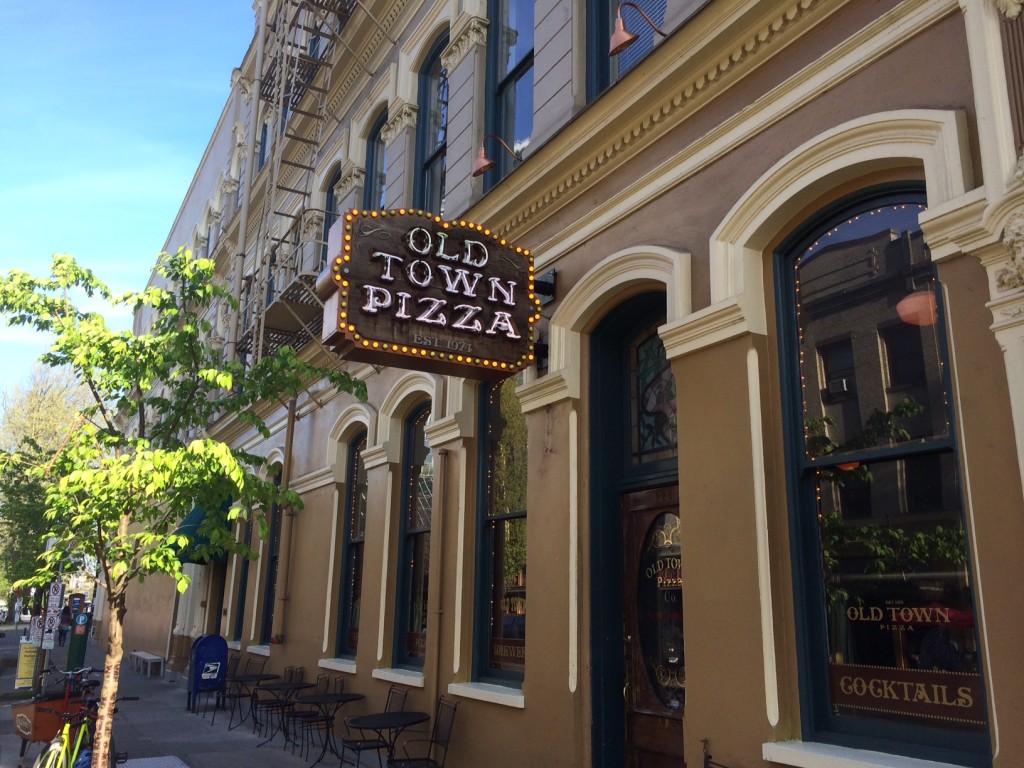 Throughout the day Old Town Pizza will donate 50 percent of proceeds from their food sales to Central City Concern’s Community Volunteer Corps Program (CVC). Donations will begin on sales starting at 11:30 a.m. and ending at closing, 10:30 p.m.

“We could not be more proud to have reached such a significant milestone in business. 40 years later and we are still committed to making the best pizza in town with fresh, local ingredients,” said owner, Adam Milne. “We are honored to be in the company of so many other wonderful Old Town establishments. Thank you to the community of Portland and Old Town, for continuing to keep us busy.”

In 1974, amidst Farrah Fawcett hair, turmoil in the White House and the release of Blazing Saddles, Old Town Pizza opened its doors. Since April 15, 1974, Old Town Pizza has been serving what is arguably Portland’s best pizza from its original location. Complete with a resident ghost, Shanghai Tunnels and a history of playing host to celebrities such as Bill Walton and William Defoe.

So dress up in your favorite 70’s attire and join in on the 40 year celebration at Old Town Pizza. Make sure to order a Nina’s Lager, you will not be disappointed.