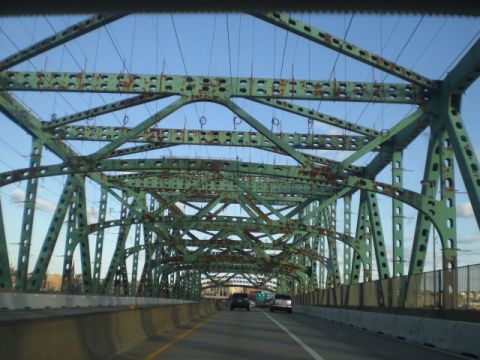 While in Rhode Island,we were doing some beer hunting; trying to seek out some dynamic, if not interesting craft brew locations. Here’s a half dozen spots we though were worth inspecting: 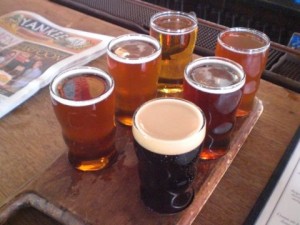 Trinity Brewpub, Providence: Recently we made our second visit to Trinity and were back to see if the place  had evolved. Located in downtown Providence, the atmosphere is much like a traditional American pub. A bit dingy and grim inside, the place has shown its age. Signage on the wall tout regional awards from over a decade ago. Unsure whether the dirty brewhouse or the Scituate Reservoir water, but the construction of all of the beers again left a lot to be desired. A sample tray served as a lesson in DMS and diacetyl for some beers, but the hardest aspect to get over was the heavily chlorinated water detected in each taster. Their Rhode Island Pale Ale boasts being named best pale ale at the 1997 and 1998 Great Northeastern Beer Festival, as well as being the “first IPA throughout Rhode Island.”  This hazy orange-bronze colored beer had cooked corn and vegetal notes all over the nose along with a pronounced maltiness. The medium to bold bitterness was not reflected in any sort of luring aromas. Trinity’s Kolsch possessed the most pronounced mineral nose, while its color was a deep copper-amber, much too dark for the style (The menu and even incorrectly described this one as having a “very pale golden color.” Some creamy biscuitiness ran in through a formidable astringency. Overall, this missed nearly every style guideline for the Kolsch style. The Belgian Pale was an identical color as the Kolsch and held a fruity, bubblegum, candied nose. Brewed with Citra and Simcoe aroma hops yet at a mild 20 IBU, this was the most interesting and palatable beer of the lot. The house Cream Ale was a pale copper-straw color with sweet corn and malt flavors. Again, the chlorine and mineral presence in the water hurt the beer most. The Marzen was a diacetyl bomb with butterscotch flavors all over it. In addition to this, the beer missed all the marks stylistically. 35 IBU derived from Saaz hops was a bit aggressive for a Marzen; 3-4% ABV was certainly low. Alas, the Russian Imperial Stout poured black with tinges of amber and carried a medium tan head. Also riddled with off flavors, it was sweet, boozy, phenolic. It basically tasted like a metallic raisin. We were perturbed as to why this beer was $8 a pint. Though it was not pointed out at the pub, we later read in a copy Ale Street News that this was a beer brewed with Brettanomyces. Hrmm. Well, that was it for Trinity and we likely won’t go back anytime soon. 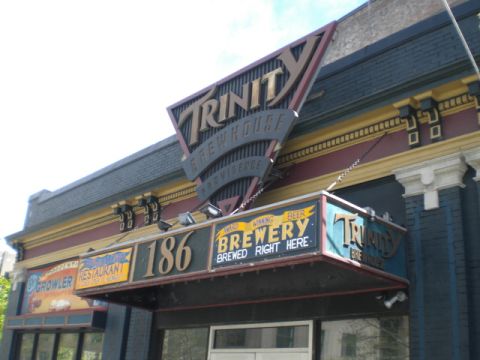 Coastal Extreme Brewing, Newport: We had the privilege of checking out the new 2,500 square-foot brewing facility of Coastal Extreme Brewing (CEB), makers of Newport Storm. Here, on the outskirts of town in Middletown, we met co-founders Brent Ryan and Will Rafferty. The two along with Mark Sinclair and brewer Derek Luke make up a foursome of founders who met while attending Colby College in Waterville, Maine. Since 1999 Coastal Extreme has made it their mission to be one of the best and perhaps the most prolific craft brewery in Rhode Island. The beer is devoid of the diacetyl prone highly attenuating Ringwood yeast that many New England brewers use in their ales. Instead, CEB uses a California ale yeast that lends itself to bright fruity esters and a helps to bring out the hop aromas as well. 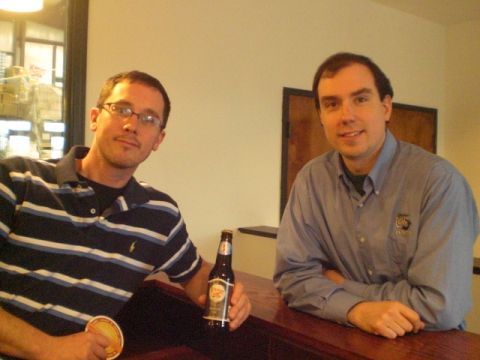 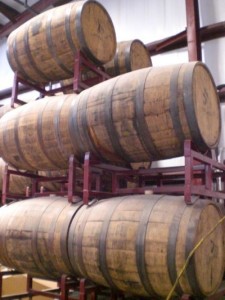 For $7 you can taste three beers in a crystal stem glass that you get to keep. And, not only is this place a brewery, it is a distillery, making Thomas Tew’s Rum (three samples of rum for $9). On our visit we sampled their flagship Hurricane Amber Ale, Rhode Island Blueberry Ale, and seasonal Spring Ale. The Amber uses a combination of American and European hops and malts (Malts: Pils, Munic, Crystal. Hops: Tettnanger, Magnum) that put forth a great balance of the two. The Blueberry Ale is a year-round Kolsch-style hybrid utilizing a touch of Magnum bittering and English Pilgrim aroma hops. At front and center is a hefty helping of hand-pressed blueberry juice that gives the golden-colored beer a bold and inviting fruit nose. The Spring Ale is a deep ruby hued Irish Red with a thick whitish head and a bold roasted malt presence. At 5.0% ABV and 31 IBUs, five malts (Maris Otter, Pils, Crystal, Roasted, Cara Pils, Chocolate) and three hops: (Golding, Cascade, Magnum) are used. A self guided tour up stairs and through a back loft area overlooked the spacious warehouse brewery where Derek Luke was at work. Any trip to Rhode Island, especially the Newport area isn’t complete without a visit to Coastal Extreme, a staple of the state’s craft beer identity. 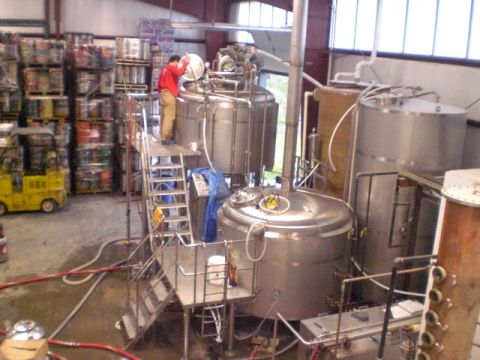 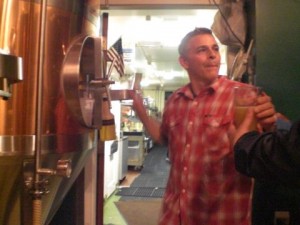 Coddington’s Brewpub, Middletown: We heard about Coddington’s just by searching the Internet for Rhode Island breweries. We didn’t have high expectations, since it wasn’t as nationally known as Coastal Extreme/Newport Storm, however, our first impression, a sample tray, made us great fans of Coddington’s beers. Brewmaster Marshall Righter, a local from Westerly, Rhode Island, we came to discover, has vast experience when it comes to craft brewing. A graduate of Siebel’s Institution of Technology’s brewing program in 1995, Righter cut his teeth at Boston Beerworks’ Fenway brewery. Finally he found himself at home in Middletown where the modest yet cozy and clean brewpub serves an assortment of seafood and American dishes as well as a standard lineup of well-made house beers. We opted for the server tray, as we often do when we first visit a new brewpub. On the tray was a delicious Blueberry Blonde Ale with fresh fruit floating in the head, Golden Ale, Irish Stout, Irish Red, a light Pale Ale, and a balanced yet hop-forward IPA. All of these beers where stylistically on point and highly drinkable. On a later visit to the pub, we received a tour by Marshall Righter, who let us sample a forthcoming Witbier out of the conditioning tank. We asked Righter about his brewing and Coddington’s. Here’s the interview: 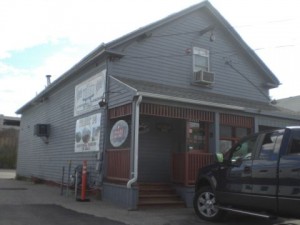 Track 84 Pub, Warwick: Our beer advocate buddy Jim recommended we not miss Track 84 in Warwick, Rhode Island. Just outside of Providence, Track 84 Pub is a stone’s throw from T.F. Green International Airport, situated adjacent to the train tracks for which it is named. Featuring 19 constantly rotating taps and more than 50 bottles for sale, Track 84 doesn’t focus on local beer as much as it focuses on choice beer. Offered on tap was the likes of Delerium Tremens, Brooklyn’s Dark Matter Barrel-aged Brown Ale, Ballast Point Big Eye IPA, South Hampton Biere de Mars, Stone Sublimely Self-Rightous, Aecht Schlenkerla Fastenbier, Dogfish Head 90 Minute IPA, Drayman’s Porter, Berkshire, McNeill’s Pullman Porter, Stoudt’s Karnival Kolsch, Victory Yakima Twilight American Strong Ale, Palm Special Belgian Ale, Great Divide Espresso Oak Yeti, Allagash White, Ommegang Hennepin and Heavy Season IPA.The place itself isn’t much to look at…or smell. When we arrived, the room had an odor of rotting trash, but a friendly and knowledgeable bartender who let us behind the bar to take pictures and relaxed unpretentious vibe was rather welcoming. A bottomless barrel of free peanuts of which the shells could be thrown on the floor help win us over. We plan to return next time we’re in town and recommend you do the same if you find yourself near the Providence airport. 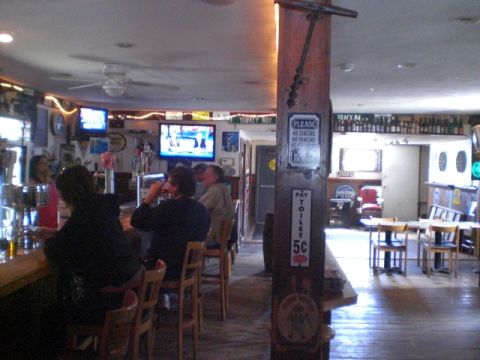 Nikki’s Liquors, Providence: We found this place by looking through the pages of Yankee Brew News. Recommended by beer Advocate as well, Nikki’s offers a wide variety of domestic and imported craft beer not available throughout much of the Pacific Northwest. Going overboard (as usual) and buying three cases of beer, we were like kids in a candy store here. Top purchases included Mikkeller 1000 IBU, Cisco Brewer Captain Swain’s Extra Stout, Nogne Dark Hops, and an assortment of Drie Fonteinen lambics in 330ml bottle. After a few folks in line ahead of us opted for malt liquor and cheap spirits, the clerk must have either thought we were utterly crazy, or righteous beer geeks. 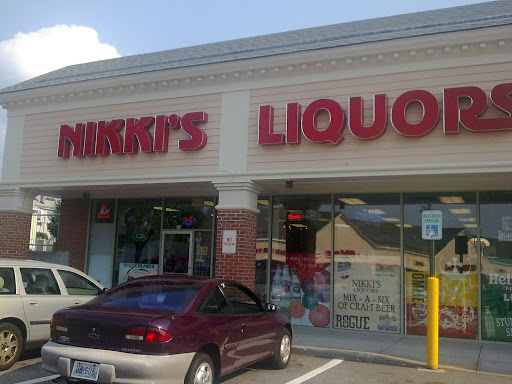 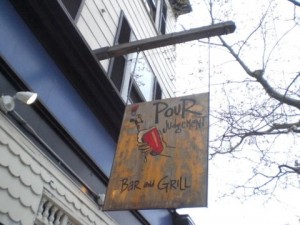 Pour Judgement, Newport: Dying to find a solid craft beer bar while in Newport, we were quite pleased to hear about Pour Judgement from Marshall Righter at Coddington’s. Here a variety of Northeastern craft brews graced the taps. On our visit we enjoyed South Hampton Double White Ale, Cisco Indie IPA, and Harpoon Belgian Pale Ale. The food was grubbin’ and the staff was prompt and friendly. The overall vibe of Pour Judgement was quite youthful and hip. It looks like it could have been a Portland pub, but, with great service. 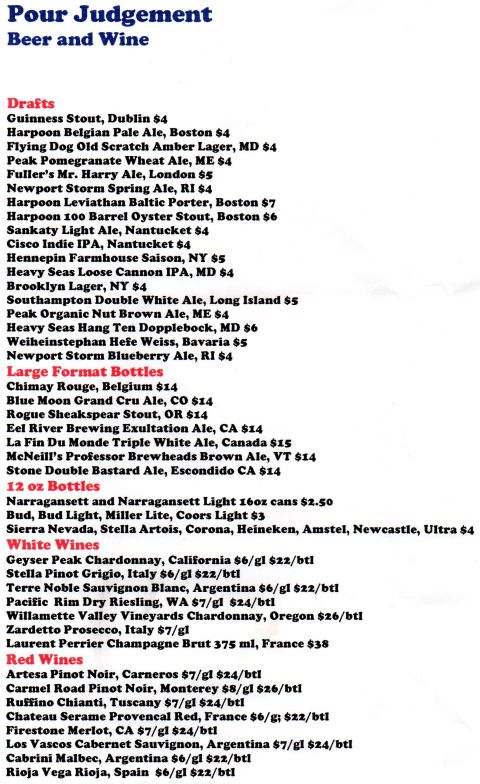 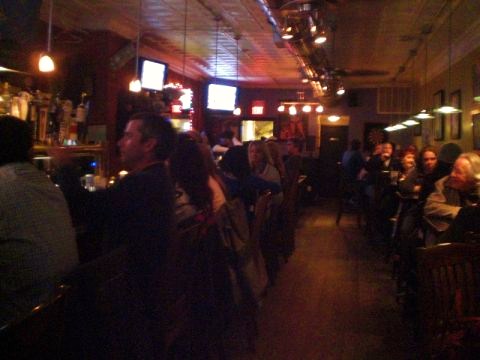 So there you have it, Rhode Island’s best beer offering…or some of them at least. For more, check out The Daily Pull’s recent write-up of some beer spots in Providence. If you find yourself in a part of the state without craft beer, just drive a few miles. After all, Rhode Island is pretty small. Or, you could always settle for a tallboy on Narragansett Premium Lager.