Statement from Jeff Schons, co-owner of the Pelican Pub & Brewery

“We’re thrilled about the potential expansion of the Pelican Pub & Brewery at the Port of Tillamook Bay. We are eager to work with the Port as it goes through this process and we believe our expanded brewery facility and tasting room would be a great addition to the City of Tillamook and Tillamook County. Choosing Tillamook allows for us to easily manage and ensure the quality of our product and provides needed jobs and economic growth to Tillamook County. We have a vested interest in our community and our neighbors because we live and work here. Just as Yamhill County has benefitted from wine tasting rooms located near the wineries, we are eager to see the same potential in Tillamook and to work with like-minded companies and organizations to make this happen.”

Press release from the Port of Tillamook Bay:

The Port of Tillamook Bay Board met with owners of the Pelican Pub & Brewery of Pacific City last Friday, May 27, 2011 regarding an expansion of current brewery operations to be located at the Port.

At the meeting, the Port of Tillamook Bay Commission voted unanimously to move the project forward and work with the City of Tillamook, Tillamook County, Tillamook EDC and the Governor’s Regional Solutions Team (consisting of stakeholder agencies – DEQ, DSL, DLCD, ODFW, ODOT, OBDD, etc.).  The project would include development of Port property along Highway 101, with the Pelican Pub & Brewery as the anchor tenant.

The Port is a good match for the Pelican Pub & Brewery co-owners as well.  Mary Jones, Jeff Schons, Darron Welch and Ken Hensen would like to keep their operations in Tillamook County.  Preliminary design has been done by Kelly Edwards of Scott| Edwards Architecture LLP.   A facility visible from the Coast Highway would attract locals as well as tourists.

The Pelican Pub & Brewery has proposed a phased approach, with Phase I consisting of a 10,000 barrel production brewery (with a glass wall for viewing), tasting room, restaurant, packaging/shipping area, and possibly a bakery and coffee roastery. Farm operations to feed spent grain to beef cattle are also under consideration.  Additional phases add brewery capacity and more jobs – a projected 79 jobs at the completion of Phase II. 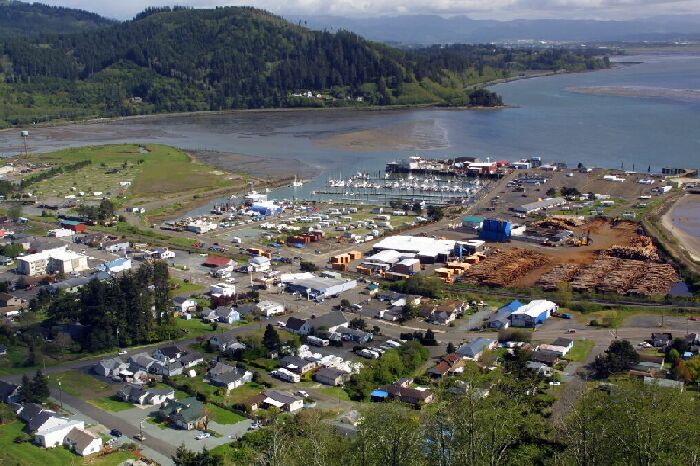 Development off of Highway 101 has been in the Port’s Master Plan since the 1980’s and come up again for consideration recently.  Port staff is moving ahead in tandem with the City and County, as well as coordinating with State Agencies to keep this project moving forward.  The Port board is hoping to see the domino effect of bringing in an excellent anchor tenant.

County Commissioner Mark Labhart has been instrumental in bringing the parties together: “This is a great opportunity for the Port and for an important business in Tillamook County.  The Pelican Group could have decided to build their brewery/restaurant in Portland closer to markets but they hoped for and wanted to stay in Tillamook County and continue to be part of this great county.  The Port offered them the opportunity to get to yes in their decision process to stay in the County.   The Port Board and staff deserve a lot of credit for their efforts in helping to make this happen.”