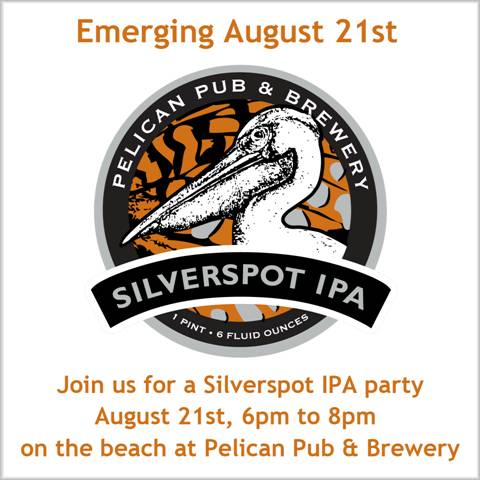 A little over a week ago, we posted that Pelican Pub & Brewery in Pacific City, OR, champion large brewpub & brewmaster at the 2012 World Beer Cup competition, announced the release of a new permanent brew. Silver Spot IPA, formulated by Pelican brewmaster Darron Welch and his talented crew of brewers is named for the Oregon silverspot butterfly, to which a portion of the beer’s proceeds will be donated to its conservation.

Tuesday August 21, 2012 marks the official release of Silverspot, an English-style India Pale Ale, at the Pelican Pub. Here’s the full details from a press release sent out by the brewery:

Drink a beer, save a butterfly!

Silverspot IPA celebrates the Oregon Silverspot butterfly which once flourished in coastal grasslands from Washington to California. Due to habitat loss, this threatened butterfly is now found only in a handful of protected areas. The Oregon Coast is home to most of these sites including nearby Mt. Hebo and Cascade Head, which can be seen from the patio of the Pelican Pub & Brewery.   Oregon Silverspot butterflies depend on a unique ecosystem of coastal grasslands, with caterpillars feeding on violet leaves and butterflies drinking the nectar of flowering plants. A collaborative habitat restoration and reintroduction program is helping to increase this butterfly population. A portion of the proceeds from the sale of this beer will help fund conservation efforts for the Oregon Silverspot Butterfly.