Today Brewpublic continued south on a quest to visit some of Northern California’s best breweries.  Four brewpubs were visited – three of which had “river” in the name.

From Gold Beach, Oregon, Margaret and I drove over 100 miles south down Highway 101 witnessing more spectacular Oceanside views.  The weather was overcast and fog was thick, but in all the winding road unveiled some wonderful sites.  Through the Redwood Forest north of Humboldt County we saw several wild elk grazing roadside.  Further down the road, we turned off east a few miles into McKinleyville, home of Six Rivers Brewpub.  Featuring a great view of the ocean from high above, the pub had a great atmosphere with a friendly barkeep named Jessica who served up a mean sample tray of eleven craft offerings. The price for most pints was only $3.75 (with the exception of the high octane brews) and just $3.00 during happy hour.

Weatherman Wheat: Served with a slice of lemon, the Weatherman was a cold front of hazy yellow American style hefe.  With a creamy finish and a soft carbonic bite, it was quite mild considering its 6% kick.

Bluff Creek Pale: A moderate in the world of pales.  With a bitter fruity flavor and a faint bouquet nose, this beer wasn’t very aggressive, but easy drinking. 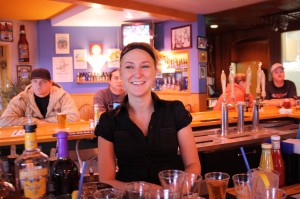 Moonstone Porter: This 6% opaque black beer with tinges of amber gave off a mild chalky chocolate smell.  The flavor had a gentle coffee presence and was very silky on nitro tap.

Blarney Stout:  Lower in alcohol than the porter, the Blarney, as the name implies is an Irish stout with a super dark body, an acidic creamy head and finished thin and nearly sessionable (also on the nitro tap).

IPA:  At a bold 7.2% ABV, this India Pale had a tropical fruity nose with an tight hop-yeast play.  Very good, not overly hopped for the style.

Chili Pepper Ale: A 2004 GABF silver medal winner, this beer was a palate killer.  A pale copper body disguised an abrasive burn that lingered on the tongue and shot down the throat.  If you like chili beers, this one is very good.

Kona Moon Porter: One of the finest beers at Six Rivers, the Kona Moon features Hawaiian Kona coffee in a coffee-esque body.  Do you like beer with your coffee?  Try this wonderful 2005 GABF Gold winner.

Raspberry Lambic: This beer stands out on any sample tray.  A bright red body glows in the light.  This dessert and party brew has a sweet-tart-mild fresh fruit zing. Jessica said she enjoys mixing it with the stout.   Mmm.

Sour Bomb: Aged in a French oak cask, this 12% ABV gigantore is actually quite smooth after you get past the initial puckering effects.  A murky and ruddy chestnut copper brew with no head and a chewy mammoth tart follow.  Excellent!

Fat Bastard Barleywine: Another behemoth, this big brew is 11% ABV with a deep copper hue and a bitter malty caramel presence.  Feel the burn.

After some samples, we wandered into the brewery with masterbrewer Carlos Sanchez.  Sanchez started brewing as a hobby over twenty years ago. “Way back then, I got fired from my job at the co-op” he says.  Sanchez started with Humboldt Brewing back in 1990, three years after their inception, and helped to develop the recipe for their famed Red Nectar Ale.  By 1992, he was helping to produce over 25,000 barrels a year of the beer. 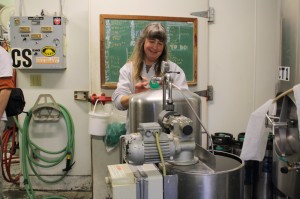 Sanchez was working on his Pilsner when we met him.  His brew set up was a unique breed, featuring a hop back.  It was the brewery’s original system.  He introduced us to cellarwoman Brittany Stewart and her dog, brewery mascot Tricki Woo.

His Lacto, Brett, and Pedio brew, the Sour Bomb was sent to Denver for the GABF says Sanchez a bit distressed.  “Some of the judges there are ridiculous” he says “One judge said ‘this beer is infected’  No shit!  I deliberately infected it. That would be like someone tasting an IPA and saying (in a derogatory way) I smell hops.”  Sanchez says he is burned out on the over-hopped beer and is a fan of the Belgian Lambic trend.  “I brewed (the Sour Bomb) as trippel and aged it in a barrel that I used for a peach lambic.  The barrels been doing its thing for some time.”

We would have really liked to stay longer and hang out with Carlos but we had to continue on to our next stop:

Only a few miles down Highway 299 to the east is the well known Mad River Brewery in the town of Blue Lake.  Established in 1989, Mad River features a quaint little pub next door to its production facility.  In an industrial park across with a view of a large smokestack, the pub is a pristine little place with a handsome wood bar built by the folks at Wallace and Hinz, maker of custom bar tops and wood furniture. At the Mad River bar, three friendly W&H employees settled in to enjoy some brews after their shift. 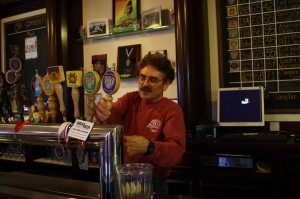 Brewer and barkeep Jerry stood behind the bar wearing a 2008 GABF t-shirt.  He gave us samples of the beers unavailable outside of the pub.  These were his beers called Heatherdowns.  The two featured were a Fabulous Freakin Blonde Ale and a Sirius Black.  He provided us with a sample of these two, and since we were on our way shortly, we only had one pint of the Mad River Steelhead Extra Pale Ale, a 2008 GABF gold medal winner.  The brew beat out 46 other entries in the golden/blonde ale category.  It was an unfiltered, slightly cloudy smooth, hoppy refreshing brew.  At 5.6% ABV and 25 IBU, it was a great beer. It’s too bad we had little time to stay, because on tap was also a 2007 and 2008 John Barleycorn Barleywine.

Back to the 101, we headed southbound into downtown Eureka where we had dinner and pints at the Lost Coast Brewery. 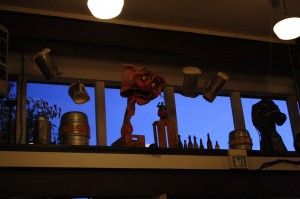 As the sun set, a bustling happy hour and dinner crowd gathered.  With burgers and salads, we ordered a Double IPA and the Raspberry Brown as well as a few samples.

Double IPA: A deep heavy amber bodied beer with a foggy off-white head and a massive grapefruit and oniony hops nose.  A big robust 7.4% IPA with enough hops grit to stun a small pony, this beer appeared bigger than it really was.  I was a little disappointed with the lack of smoothness in this one.  I found it a bit cloying and over hopped if this is possible.  Maybe the caramelly malt profile just didn’t jive with the hop varietals or payload.

Raspberry Brown: A ruby brown bodied brew with a spotty, rocky white head, and a saccharine raspberry nose. This beer was quite enjoyable. A brown ale base balanced out the sweet raspberry very well and made for a suitable meshing of flavors.

After dinner we sampled a Tangarine Wheat which appeared to be an artificially flavored sub-par wheat with a dose of Gatorade or Tang in it. Odd. We also sipped a taste of the Winter Brau, Lostcoast’s seasonal offering.  It was a dark brown bodied beer with an exaggerated malt profile that worked well with a mild stinging hop presence in the background.  Nutty up front and finishing mildly bitter and creamy with an overall sweet attitude, this beer was not too bad. 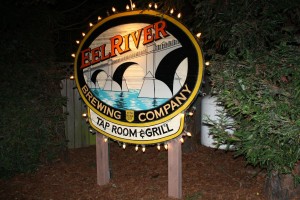 After dinner and several glasses of water, we hit the highway again.  Nearly 20 miles south of Eureka in the town of Fortuna, we stopped at Eel River Brewing.  Quite familiar with many of their beers including an array of certified organic ones, We found the brewpub amidst several parked tractor trailers and a few motels.  I was surprised to find the motif to be likened to a hunting lodge of sorts with several dear heads on the walls as well as those of buffalo and wild cats. 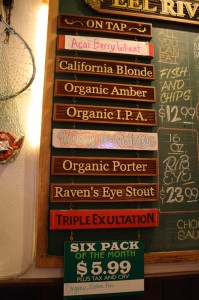 At first there was no seats available at the bar, but after a few moments some folks left and we parked ourselves at the long wooden bar.  Behind the bar, the brewery was visible.  After perusing the taplist, the busy barkeep took our order.  Always game for something I haven’t tried before, I opted for the Hoppy Holidays and Margaret selected an Acai Berry Wheat Ale.  The Hoppy Holidays was a medium orange-copper colored dry-hopped imperial pale ale with an over-the-top bitter citrus flavor.  A clinging floral strawberry and grapefruit piquancy left a full-on sticky hops dent on what remained of my palate.  The Acai Berry Wheat was a pale straw bodied American wheat ale with a minimal head and tropical berry notes pluming from the top.  With a crisp, smooth, real fruit presence, this beer was good, but after the other fruity beers at Lost Coast, I think I hit my fruity quota for the week. 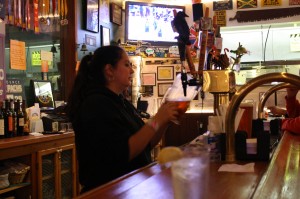 As we sat at the bar and let our minds try to absorb the visual stimulation around us, we noticed a sign on the door to the back, behind the bar that informed us of a new seasonal 22-ouncer from the brewery.  The “Climax Noel” Imperial Red Ale was for sale for just $4.99 a bottle.  We picked up two to take home with us.  Had we more room in our small car, we’d have likely bought more. eel River also featured a “Six Pack of the Month” deal, where a person could take home a select sixer for just $5.99 (The brewpub beer on our trip here in California so far has been quite affordable to say the least).  The server seemed distracted and unable to multitask as we sat at the bar for sometime waiting to pick up our to-go beers and the tab.  Finally we paid up and hit the trail down US-101.  Next stop: Fort Bragg, home of North Coast Brewery.