We just heard from Mike Weksler at Green Bottling, Portland’s only mobile bottling service, and he gave us a report that the Roots Epic Ale has just been bottled and is ready for its release on Thursday December18.  Said Weksler on Tuesday “…We bottled 40 cases of Roots Epic earlier today.  It will only be for sale at Roots. We also bottled the IPA and Red, but that really isn’t news.”

Says Roots owner Craig Nicholls “Each year, we have a local artist design a new label that’s unique to this beer and Roots Organic Brewing Co. We hand Bottle and label each beer. The limited edition Magnums, can only be purchased at Roots Organic Brewing Company and a limited few beer specialty stores around the state. If you want one you need to be quick, as these have become a beer collectors top purchase over the years and there usually gone within the first week of it’s release!” 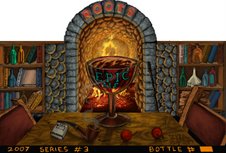 THE PROCESS
Nicholls adds “We hand smoke 55 pounds of Munich malt over cherrywood. We have built a special stainless perforated “contraption” that we put the malts in to smoke. We then have to hand turn (3 pounds at a time) the malts every 10 to 15 minutes. This goes on for up to a week, about 4 hours a day! The Cherrywood been soaked in 18-year-old Glenlivet, Cognac, Rum and Northwest cherries.”