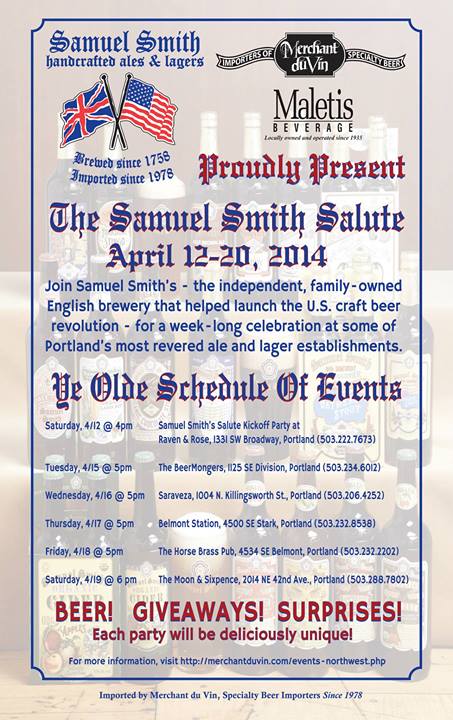 This past weekend, the Samuel Smith Salute week of events kicked off in Portland. The week of celebrating Samuel Smith continues tomorrow night through Saturday with five more events at five of the better beer bars in Portland.

The Samuel Smith Salute kicked off this past Saturday at Raven and Rose in downtown Portland in their upstairs Rookery Bar. If you missed this chance to celebrate with Samuel Smith, there are five more events happening in Portland beginning tomorrow night at The BeerMongers.

Samuel Smith began exporting their beers to American with Merchant du Vin in 1978 when the U.S. beer market was continuing to consolidate and shrink. During this time there were about 85 breweries in the US there were a couple of craft brewers, Anchor Steam Brewing and New Albion Brewery. Imports were few, and almost all were pale lagers. Now speed up to today and the American beer scene is the most dynamic on the planet. 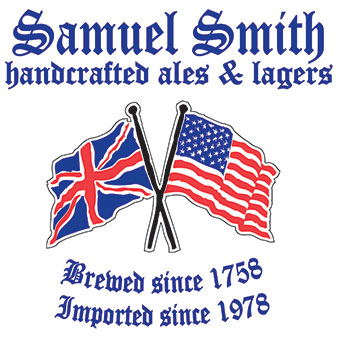 Each year in April, many great beer spots salute Samuel Smith with promotions, tastings, special prices, and a chance to celebrate: the annual Samuel Smith’s Salute. Join in to savour the benchmark beers from Samuel Smith’s and recall the role that this splendid brewery has played in building today’s American beer scene.

Here’s a rundown of the Samuel Smith events that continue this week in Portland.

The BeerMongers – 1125 SE Division St.
Tuesday, April 15, 2014
Samuel Smith Salute Week continues with The BeerMongers! The respected beer gurus celebrate their love of the British brewery as only they can. 5:00 – 9:00 pm.

Join in to raise a glass with Samuel Smith this week, “Brewed Since 1758 – Imported since 1978”. Tweet with #samsmithsalute.