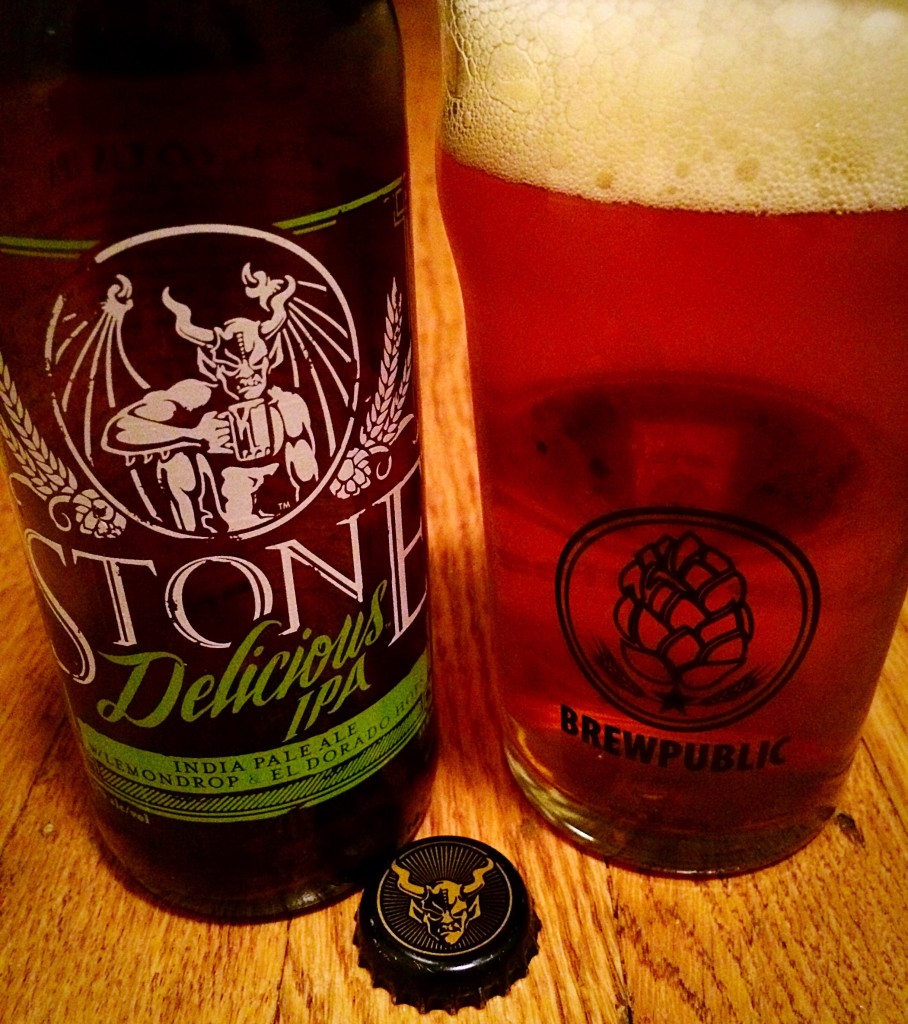 Stone Brewing joins the select number of breweries in offering a gluten reduced beer with their new Stone Delicious IPA as it begins hitting store shelves across the country today.

This West Coast IPA is fermented with barley but uses a similar approach as Widmer Brother’s Omission series of beers by adding an enzyme during the brewing process. This enzyme called Clarity Ferm does the work of reducing the beer’s gluten level to well below the threshold of 20 parts per million required by the Food and Drug Administration to label a product “gluten-free.” However, unlike other similar beers on the market this one is a bold, hop forward IPA. The hoppiest and most satisfying gluten reduced IPA that we have ever tasted.

Stone Delicious IPA is a citrus forward IPA that is dry-hopped exclusively with El Dorado hops. The other prominent hop used is the newer varietal Lemondrop that is used to enhance the beer’s sweet, lemony taste. True to West Coast IPA style, this beer is 7.7% ABV and 80 IBUS. Yes quite robust compared to the other limited gluten reduced beers out in the market. 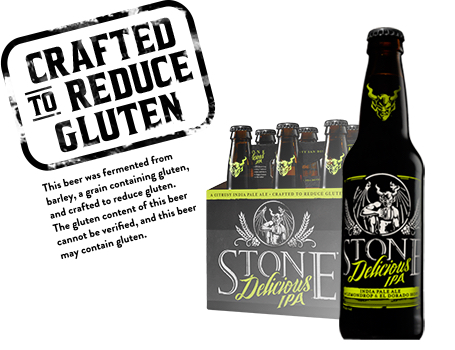 Here is more from the brewery:

Stone has always been obsessed with brewing bold, high-quality craft beer. When we developed this pleasantly bitter, deliciously lemony IPA, we took it as an opportunity to do something we’d spent over a year researching and perfecting: reducing the amount of gluten in the beer* to the degree that nearly everyone could experience our no-holds-barred approach to craft brewing.

While our beers are many and diverse, yet unified by overarching boldness, India pale ales are our undeniable bread and butter. We’ve brewed many over the past 18 years, from double-down bitter bombs to piney session sippers. Whether it’s big IBUs or a precise ABV, there’s usually a target we’re shooting for. The same is true of this, our latest IPA, but we gave zero thought to any acronyms. This one was all about packing as much unique and, you guessed it, delicious flavor into a glass as humanly possible, regardless of oomph or octane. This intensely citrusy, beautifully bitter beer is worthy of the simple-yet-lordly title of Stone Delicious IPA. Lemondrop and El Dorado hops combine to bring on a magnificent lemon candy-like flavor that’s balanced by hop spice. It’s unlike anything we’ve tasted in nearly two decades of IPA experimentation, and another lupulin-laced creation we’re excited to introduce to hopheads everywhere.

Stone Delicious IPA will be available in 6 pack 12oz bottles and on draft. However, the draft version will not make the claim of gluten reduced since the brewer cannot control the conditions of how the beer is being served through the establishment’s draft lines.

Tasting Notes By Brewmaster Mitch Steele:
Appearance – Pours deep gold with a white-colored head.
Aroma – Spicy, herbal and citrusy hop aromatics balanced with light-toasted malt. The spiciness is reminiscent of lemongrass.
Taste – The hop flavors really explode with a dominant flavor that reminds many on the brewing team of a lemon Starburst candy!
Palate – Medium body with a bitter, dry finish.
Overall – We went through several iterations of this beer at our Stone Brewing World Bistro & Gardens – Liberty Station restaurant brewery, using several hop recipes until we had that “Aha!” moment tasting a beer that I had asked Liberty Station Brewing Manager Kris Ketcham to brew. It was a single-hop beer called the Lost City of Liquid Gold, using 100 percent El Dorado, the new hop from Yakima, Washington. This beer gave us the last piece to the puzzle on the formulation for Stone Delicious IPA. We changed the dry hop to 100 percent El Dorado, and we achieved magnificent lemon candy and spicy hop flavors that are fun and unique.

To learn more about Stone Delicious IPA and to view lab results for individual batches visit the dedicated webpage at stonebrewing.com/deliciousipa.