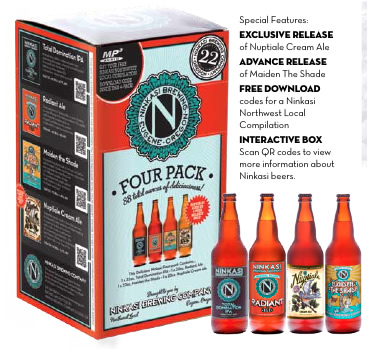 There’s a craft beer or ten for every season, and summer seasonals are all about refreshing sessionable brews for the long hot days and summer nights. Ninkasi’s new Summer 4 packs, in stores now for a suggested retail of $13.99, hits a summer sweet spot by providing a great summer mix (and mixtape). The packs include 22oz bottles of the Radiant Ale summer seasonal, a bottle of their increasingly dominant Total Domination IPA, plus the exclusive release of the Nuptiale Cream Ale and an advance release of their “Summer IPA” Maiden the Shade. To entice thirsty Ninkasi lovers, and it seems there’s plenty around these days, the packs come with a card that includes a URL and download code to access over an album’s worth of NW music tracks. After going to the provided URL and entering the code (it was in all-caps, and needed to be entered the same), I was rocking out to a bunch of local (mostly rock, and at least one hip-hop) bands I hadn’t heard of, which was as refreshing as the beers. 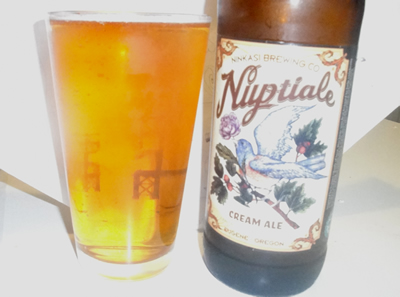 Exclusive to these 4 packs is the Nuptiale Cream Ale, originally brewed for a Ninkasi wedding. It’s pale golden in color and it poured with a thin head. It has a slightly creamy mouth feel, medium carbonation and a mild bitter hop finish. Aroma and flavor  are a little biscuity, with some light caramel malt and piney hop notes. Definitely a lighter, mellower beer than its bigger, hopped-up pack mates. It’s certainly a drinkable summer session ale, but a little stronger than some at 5.7% ABV. This ale may do the trick on a hot summer day, but I found myself eager to get to its bigger more flavorful pack mates. 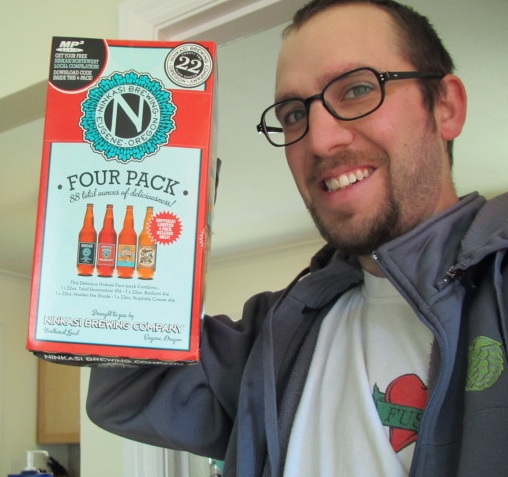 The 4-pack comes in an “interactive box.” I was hoping that this meant that the box, and the brown bottles contained within, actually opened. After interacting with them, thankfully they did. Further investigation uncovered that “interactive” in this case actually meant that it contained those new-fangled black and white QR codes that are popping up on labels and other print materials these days. QR codes, when scanned with a smart phone app, open your browser and take you to a website. In this case they’re supposed to take you to a website with more information about each of the brews. I spent ten minutes trying to get the free QR code reader app on my iphone to make this interactive magic happen, and failed. Despite my (or my phones) technological ineptitude, I’m sure the codes work just fine. I was much more eager to interact with the bottles. As far as interactive boxes go, I found that interacting with the box by opening it, then emptying the contents of the Nuptiale into my glass was more satisfying than playing with my phone.

Beer descriptions from the box:

Maiden the Shade A salute to the playful side of summer, we had fun with this beer! Maiden the Shade has  a big robust hop character from the liberal use of 7 different varieties of hops. It’s completed with a light colored malt backbone to stay in balance. 1065 SG • 72 IBUS • 6.8% ABV

Nuptiale Cream Ale Inspired by human rituals of love, this beer was first brewed to help celebrate a Ninkasi wedding. A cream ale in style, straw-hued— with a rich, creamy mouthfeel and thirst-quenching drinkability—this light Ninkasi offering is for celebrating our loves in life or our love of life. 1054 SG • 26 IBUS • 5.7% ABV

The summer 4 packs are in stores through Sep 1. Maiden the Shade individual bottles will hit shelves in early July.