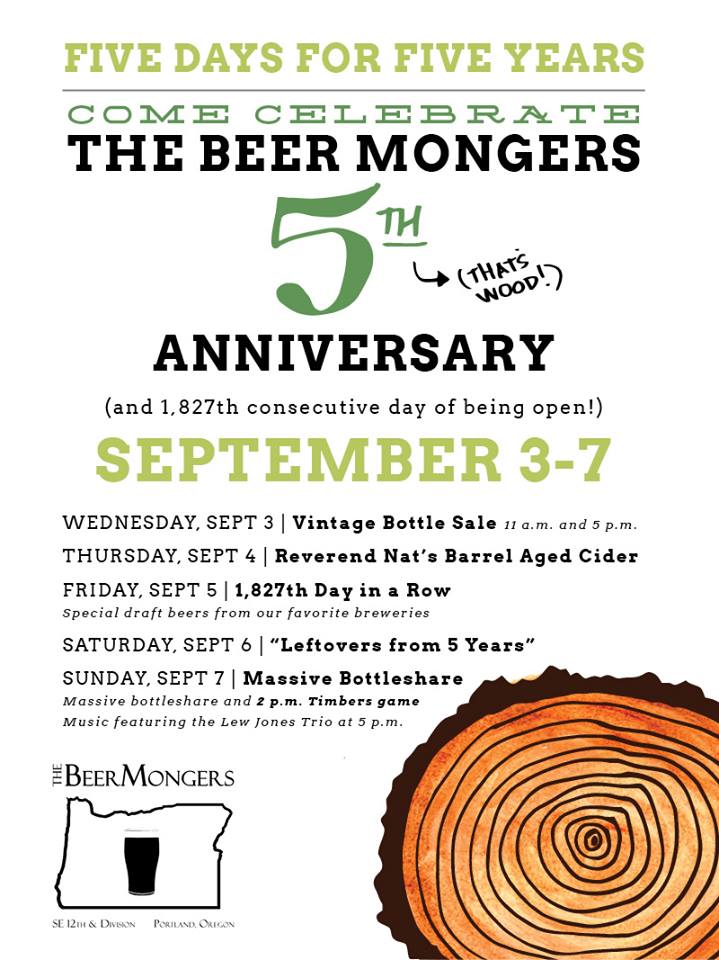 Five years ago on September 5th, Sean Campbell and Craig Gulla opened the doors to their new bottle shop, The BeerMongers. Since this time there have been a few changes that have taken place at this bottle shop, one owner left the business as the other brought in more bottle and draft selections. However, one thing remains constant, their knowledgeable employees.

So beginning on Wednesday, September 3rd through Sunday, September 7th, The BeerMongers will host five events for five straight days including a Vintage Bottle Sale, Cider Night, Anniversary Party, Leftovers Day and caps it off with a massive Bottle Share. With all of these events beginning tomorrow at The BeerMongers, one may not want to leave SE Portland.

Vintage Bottle Sale
Wednesday, September 3rd – 11:00am & 5:00pm
To kick off the BeerMongers “5 Days for 5 Years” festivities, they will dig around in the storage space for some great vintage beer to sell. To accommodate the 9 to 5’ers, they will release some bottles at 11:00am and some more later in the day around 5:00pm. Something you buy this day may help you win a FREE ticket to Timbers match Sunday, September 7th.

Tap list for vintage bottle day will include the following among others:

5th Anniversary Cider Night with Reverend Nat’s
Thursday, September 4th – 5:00pm to 11:00pm
This will be a very special night almost a year in the making. Sean, Jim, Chris, Nat and the other wizards at Reverend Nat’s planned to make a blended barrel aged cider and tonight The BeerMongers share the results to their loyal patrons. They will be pouring draft versions of the 6 different barrel aged ciders that were used to create the final blend. They will have the final blend on draft and in bottles to sell. And for the rest of the taps they will be featuring other great ciders.

5th Anniversary Party
Friday, September 5th – 3:00pm to 12:00am
This day marks 1827 days since The BeerMongers opened its doors in September 2009. Since this time they have been open everyday because Sean and his crew do it for the people. Their vision was bringing together the best beers with the best beer drinkers and having fun while doing so. They are very grateful for all the support and today to mark 5 years since the humble beginning, they will have some of their favorite beers from their favorite brewers. Expect to see beers from The Commons, Burnside, Breakside, Block 15, De Garde, Oakshire, Ballast Point and many more!

5th Anniversary Leftovers Day
Saturday, September 6th – 11:00am to 12:00am
After 5 years in business we have poured many hundreds of different beers and sold thousands of different bottles. Some get stashed away in our climate controlled storage space on purpose and some just get overlooked. All kegs and bottles are stored in the dark at exactly 58 degrees since we got hold on them. Today we will feature the “leftovers” from five years. Expect to find Cascade, Block 15, Baladin, Firestone Walker, Alaskan, Sierra Nevada and many more. There will be bottles on sale too. Thanks for helping us make room for the next five years.

5th Anniversary Massive Bottleshare
Sunday, September 7th – 11:00am
As part of the effort to continue the education of the Portland beer scene, The BeerMongers have been open to hosting bottleshare events. These events help all of us try beers that are not available in our market or are so rare they are hard for the average person to get his hands on. Today The BeerMongers open their doors to all beer lover’s and their bottles. Bring in that special 2007 beer that needs to be drunk now! Share it with new and old friends. Our beloved Portland Timbers play a home game at 2:00pm. Head BeerMonger Sean will give away 3 tickets to the game to the 3 people that bring in his favorite 3 bottles before 1:30pm. So be prepared to get on the bus and go to the game. There will be some live music featuring BeerMonger favorite Lew Jones after the game to wrap up the 5th Anniversary weekend.