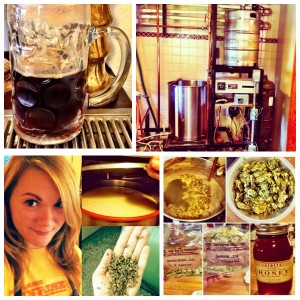 I am not a skilled cook, chemist, nor a patient woman; as such, I had never undertaken home brewing….until now. Well, 17 weeks ago to be more exact. I now have two batches under my belt. The first brew was a German Alt, perfect for a German gal. The second was a Porter brewed with honey. I am able to fully admit that though I have been immersed in beer for a large portion of my life, I was still a grasshopper in the act of hands-on brewing so I decided to take on a brewing Miyagi. I have been brewing with some seasoned home brewers in the hills of Oakland. Yes, I had chaperones. Not to say everyone who does or has aspirations to homebrew needs to start with pros, I just wanted the cushion.

I will say straight out of the gate, there is something extremely rewarding and pleasurable about consuming something that was created by one’s own hands. The time, effort, interest, and of course $$$, heightens the sensory experience all the more upon consumption. You feel proud of what you are drinking, be it amazing or dismal. Luckily, both the homebrews I have partaken in have come out very nicely. I have also always been a sucker for learning. I love education, one major reason I pursued my Master’s. Brewing is a whole other beast that I am training to tame. I am learning about ingredients, science, machinery, and how to have patience (this one will take a bit longer). I can see why some home brewers become addicted to this hobby. It can be invigorating! A true craft. 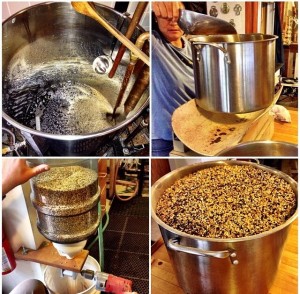 I am a ‘hit the ground running’ kinda person, so brewing is no exception. Both batches have been 20 gallons and choosing the all-grain method. The system was designed by the lead home brewer who is an engineer and has been perfecting the system since 1999. I felt incredibly lucky to work on what he has created. He even has his “brewery” retrofit for earthquakes. And by “brewery,” I mean a spare room in his home. Both brews have taken an estimated 9 hours on brew day. Of course, one thing you learn when brewing, is that it is not all active time. A large portion of that day is what is referred to as the “hurry up and wait” method. Due to these gaps, we have some traditions to ease the waiting duration. We drink a previously made homebrew, shoot darts, and talk shop. This may seem simple, which it is, but fantastic relaxation. Not to mention, playing darts is slowly but surely improving my hand-eye coordination…I think. Let me not leave out the cleaning fun. I hate doing dishes. I do not have a dishwasher and I despise every dish I wash as if it has wronged me. However, when it comes to brewing, I clean like the Queen herself would inspect my work. I want to be diligent, another skill I am acquiring. I am fully aware that cleaning and sanitizing is a large, critical task to successfully brew.

If you’ve read this far, you can see I have not made this a “How To” article. I mean, as a grasshopper, who am I to be writing instructions? No, this was to advocate for anyone who has thought about homebrewing and has yet to pursue it. That was me. That was me for about 5 years. Carpe homebrew!