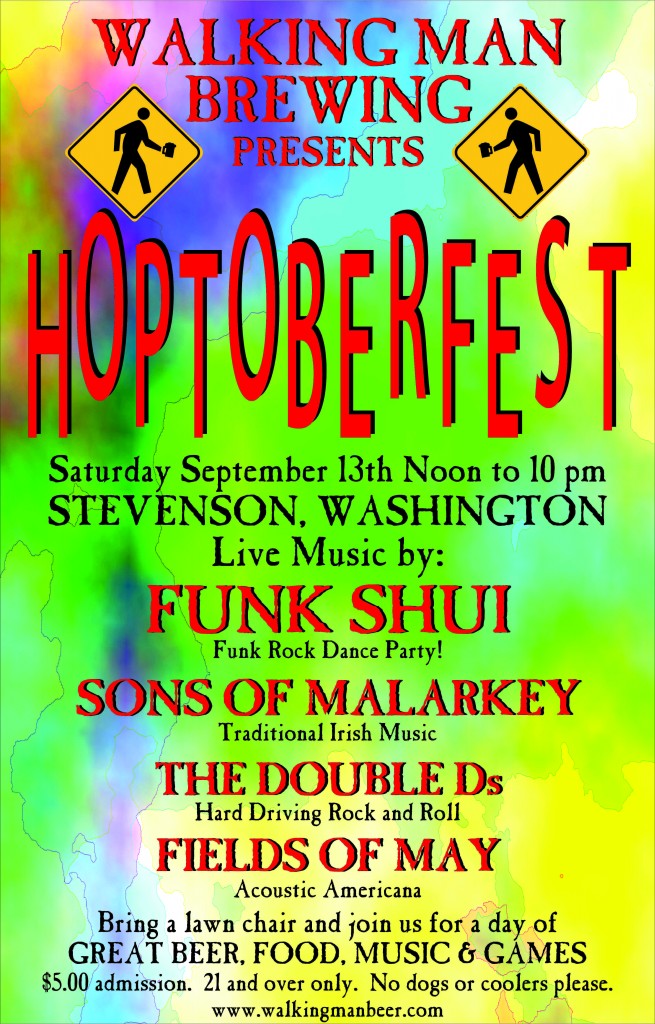 Stevenson, WA – Walking Man Brewing will host the return of Hoptoberfest Saturday, September 13th from noon to 10pm.  This 21 and over event will take place in the field adjacent to the brewery and in the pub beer garden. Traditional festival food, live music and lawn game competitions will be offered throughout the day.

This once annual Hoptober Festival took a brief hiatus and is returning this year with renewed focus and energy to be one of the best since it’s debut in 2001.  A staple event in the Stevenson, Washington community, Walking Man Brewing’s Hoptoberfest provides the perfect setting to celebrate and enjoy the end of summer with friends and beer lovers from throughout the Northwest.

“Hoptoberfest is our way of capping off the summer season and saying thank you to our loyal fans and friends old and new.  It’s always been about celebrating what we do and why we do it,” said Walking Man Brewing’s founder and owner Bob Craig.

In honor of the festival, the brewery will craft a Hoptoberfest beer and will feature some special one-off brews fans won’t want to miss. In addition to the beers offered in the festival tent, the pub will have ten beers on draft, including many of Walking Man’s well-loved, award-winning styles.

Live music will kick off at noon with the Americana folk sound of Fields of May followed by the classic rock group Double D’s. A late afternoon set will feature the powerful, bluesy voice of Stevenson’s own Emily Albaugh.  The Portland based band, Sons of Malarkey will hit the stage with their high energy traditional Irish and Celtic tunes at 5:30pm. Funk Shui will finish the festival with their seven-piece band’s original funk tunes that are sure to keep festival goers on their feet.

Lawn chairs are welcomed.  No dogs or coolers allowed.  21 and over event.  Admission is $5.

About Walking Man Brewing:
A pioneer in the Columbia River Gorge, Walking Man Brewing began impacting the Northwest craft beer scene in late 2000. Garnering medals and honors in some of the top beer competitions in the world, it has long since become a destination for beer enthusiasts from around the globe.