We knew when we began organizing our BrewPubliCrawl last year that we needed to get Walking Man Brewing on board. Not only are their beers some of the best on planet earth (no exaggeration!), but the names are appropriate and often quite clever. They usually pay homage to humans and our ability to put one foot in front of the other. An apparel item sold at Walking Man’s brewpub in Stevenson, Washington is an homage to their vastly popular Homo Erectus Imperial IPA and reads “Brewed in celebration of being erect for two million years.” Some of their other wittily named brews include Olde Stumblefoot, Perambulator, Somnabulator, Biped Red, Heaven’s Gait, Abbey Road, and Knuckle Dragger. 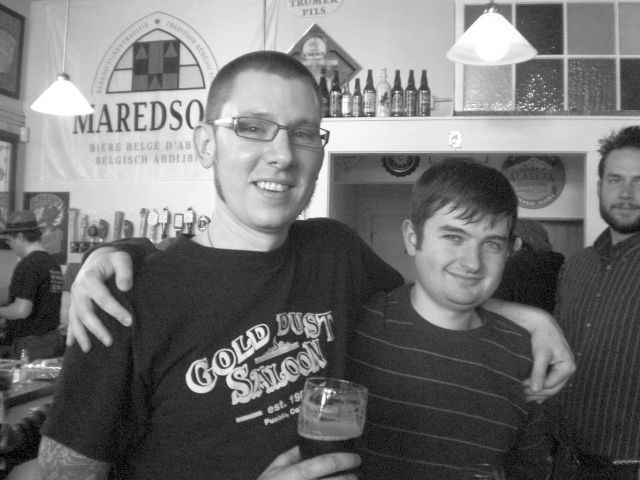 We are elated to have brewers Jacob Leonard and Dan Munch on hand for the SE Division Street BrewPubliCrawl. These gents and two home run hitting brews will be at The BeerMongers with the likes of Barley Brown’s and Beer Valley. In total, eight breweries and their brewers will be on hand for this event hosted by the four best beer bars on SE Division Street.

Here’s what Walking Man is bringing to the event:

Big Black Homo Imperial Cascadian Dark Ale: We make it a point to  hunt this beer down every time we hear of it’s existence. It’s kind of like Big Foot, the sightings are rare and sometimes out of focus. A spin on Walking Man’s beloved Homo Erectus, Big Black Homo is best described by Leonard as follows:

Big Black Homo is an Imperial Cascadian Dark Ale. It’s an aggressively dry-hopped version of Homo Erectus with an addition of English chocolate malt, and German De-Bittered black malt. We dry-hop with A-LOT of Columbus hops. It’s 8.5% ABV and 100 IBU’s. It smells like oily dank Northwest hops, and has an interesting light chocolate and rich malt backbone.

Also along for the peregrination will be a one-of-a-kind sour wheat brew we helped to cognominate “Foot Funk.” Of this unique specimen, the brewer bids…

“Foot Funk (I like this by the way) is something that we have been working on for about three years. It’s our American wheat ale, Crosswalk Wheat, that has an addition of orange blossom honey, bitter, and sweet orange peel in the kettle, then was inoculated with the Lambic blend of yeast and bacteria, and left to age in an oak barrel. We never really expected anything out of this, but are very happy with the end beer. It’s got strong Brettanomyces aroma, with a slight sour lactic acid “zing.” It’s very light golden color, and has flavors reminiscent of tangerines, peaches, and funky Brett character. It also has a subtle neutral oak character, that balances the acidity. It’s fun and strange, and I am really excited to get some feedback on it. We have about two more kegs of it and are kind of sitting on them, because we want to serve them at something special. Foot Funk is 5%ABV, and 18 IBU’s. Not that the IBU’s really matter.”

Make sure to walk, crawl, jaunt, or stroll over to The BeerMongers for great beer, and pay a visit to Walking Man’s Brewpub, recently named the 15th best in the world by RateBeer.com.

Walking Man, Beer Valley, and Barley Brown’s beer and brewers will be at The BeerMongers (1125 SE Division St.) from 4:30-6pm on Saturday March 20, 2010. For more information visit our events page.

If you are planning on attending the BrewPubliCrawl paying in cash would really help the bars and save time for everyone. Please know your limits. There’s a lot of beer to be had. Make arrangements in advance if you need a ride. Designated drivers, taxi cabs, and public transportation are encouraged. The BeerMongers is close to the #4 and #70 bus lines. Pace yourself and have fun! We look forward to seeing you there!