Walla Walla, Washington has been  a world class destination for wine connoisseurs since the 1970s. Producing some complex and flavorful varietals has garnered international acclaim for the Merlots, Cabernets, and most recently Syrahs of the area. In fact more than 100 wineries in the the Walla Walla Valley generate more than $100 million annually and make the area a hotspot for tourism. Walla Walla Community College offers an associate’s degree program in winemaking through its recently established school of Enology and Viticulture, which also operates its own commercial winery.

However, long before the emergence of the valley’s identity as a wine producer, beer was the lamen’s drink. Thanks to my friend Yvette Uber, I was able to learn a history of Walla Walla’s brewing culture from an issue of American Breweriana Journal which had an article by Herman Wiley Ronnenberg. In this magazine Yvette let me borrow, I learned that in 1855 pioneer brewer Emil Meyer established the first brewery in the future state of Washington. At the time this was Oregon Territory. When gold was discovered along the nearby Salmon River in 1860, Walla Walla became a major depot for supplies and by the following year, Meyer advertised his City Brewery and Bakery on Main Street in the local publication, the Walla Walla Statesman. Meyer’s focus was lager beer, bread, a variety of crackers, fruits and vegetables, wines and liquors.In 1862 Vancouver Brewery Ale from America’s Vancouver became available in Walla Walla to compete with the local brews. Making the long journey up the Columbia before being hauled over land, Vancouver’s ale offered a fruitier tasting alternative to Meyer’s lager. By 1864 Meyer was also in the ale producing business and had the beer brewed at his Second Street brewery on the east end of town. A real entrepeneur it has been documented that Meyer also briefly ran a brewery in Idaho City in the Boise Basin during times of gold rush. In 1865 Meyer was back at the Walla Walla City Brewery manufacturing bock beer. A report says that the brewer gave a dozen bottles to the newspaper and says that some “beer sops who happened to drop in hornswaggled it down and left smacking their lips with smiles of satisfaction beaming upon their countenances.”

In 1870 German born brewer John Stahl made his way via California and Canyon City, Oregon after spending twenty years stateside to acquire the City Brewery from Meyer. This followed a fire that claimed his property in Canyon CIty. Stahl was an experienced brewer. Many accounts believe it was also the gold rush than lead him intot the Boise Basin around 1865. Like in many pioneer towns in the 19th Century, fire and economic troughs claimed the fortunes of many businesses.  In February of 1862, Stahl’s brewery was burned to the ground. A nearby house was rebuilt as a two-story building on South 2nd Street and still is extant as one of the oldest brick residences in Walla Walla. This brewery lies where a present day Eagle’s Club and Bowling Alley exist. After John Stahl passed away in 1884, his wife Catherine successfully continued on with the business. From this year until 1912 Mrs. Stahl remained the sole owner of the brewery. The City Brewery produced exclusively Steam beer until 1888 before switching to lager. Mrs. Stahl personally supervised all brewery departments during this time. According to an 1891 commercial guide to Walla Walla, Catherine Stahl “upon (her husband’s) decease, Mrs. Stahl, who possesses the business ability much beyond the average share of women , or men either, for that matter, determined to continue the business so well established by her husband, and its proud position today among the most solid and reliable manufacturing businesses of Walla Walla, shows her judgment to have been a wise one.”

By 1905 Stahl Brewing and Malting Co. and Jacob Betz’ Brewing Co. were the only noted breweries in Walla Walla. During the time that the City Brewery was operative, other area brewers were manufacturing primarily lager beers. Joseph Helmuth ran rival Walla Walla Brewery that also sold liquors, wines, and from a Main Street operation during the 1860s. The Prussian born Helmuth was referred to as “Lager Beer Joe” by an esteemed Walla Walla brewer.

In 1880, Henry Weinhard’s nephew Jacob Weinhard came to nearby Dayton (about 40 miles from Walla Walla) after apprenticing for his uncle’s Portland brewery. Jacob Weinhard bought a partnership in a small existing brewery. By 1883, he was sole owner and began building his local empire. According to the Weinhard Hotel’s website, during the next decade he expanded the existing brewery and built a malt house with an outdoor German beer garden for the summer.

In 1890, he constructed the Weinhard Hotel building to house the Weinhard Saloon and the Weinhard Lodge. When the saloon opened, the newspaper called it “perhaps the finest in the State of Washington, and we doubt if there is anything of the kind to surpass it on the Pacific Coast”. The interior was covered with murals of scenes depicting the Northwest. In 1904, he built an Opera House on Main Street in Dayton which operated as the Weinhard Theater until 1916 when it burned. In 1907, he built a large Victorian house overlooking Dayton which he called “Hohenstaufen”. This home has been placed on the National Register of Historic Places.

Over the years many changes came to the Weinhard Building. The Weinhard Lodge remained but use was discontinued in 1963. When the Weinhard Hotel was created in 1994, the elements of the lodge hall were used throughout thus retaining the architectural heritage of the building. The wainscoting, doors, moldings and hardware were all recycled from the lodge hall creating the Weinhard Hotel. Great care has been taken so that each guest has the comforts of the twenty-first century while at the same time experiencing the flavors of the past.

Today, as one should expect, much has changed in the craft beer landscape across the county. This is mirrored by Walla Walla, who for many years was without a brewery due to the uniformity that is often associate with the Prohibition and the rule of the Big Three (Anheuser-Busch, Miller, Coors). However, since the most recent wave of craft beer revolutions smaller breweries with a focus on artisanal flavors have been popping up all over America. Still, Walla Walla is a town of only about 30,000 in a region about twice that size. Agriculture is still a prominent part of the economy but the palates of the average blue collar beer drinker has a ways to go. Portland, despite being just over three hours by car from Walla Walla seems worlds away when it comes to beer preferences. This could be in part to the Walla Walla Valley’s identity as wine country. According to Gary Johnson, owner of Mill Creek Brewing in downtown Walla Walla “It’s marginal at best. We’re lucky we’ve stayed alive. We like to make products different from the mainstream market.” Johnson appears to take a deep pride in the history of Walla Walla’s brewing, sharing old black and white photos from the city’s pioneer days. Some of these same pictures were also featured in the American Breweriana Journal Yvette let me borrow. Johnson says that the wine crowd is beneficial to his business. “We see about 70% of wine people when they come to town. Big wine weekends are big weekends for us. Along with small towns comes small minds. We’ve existed because we do what we do well and people come to us.” 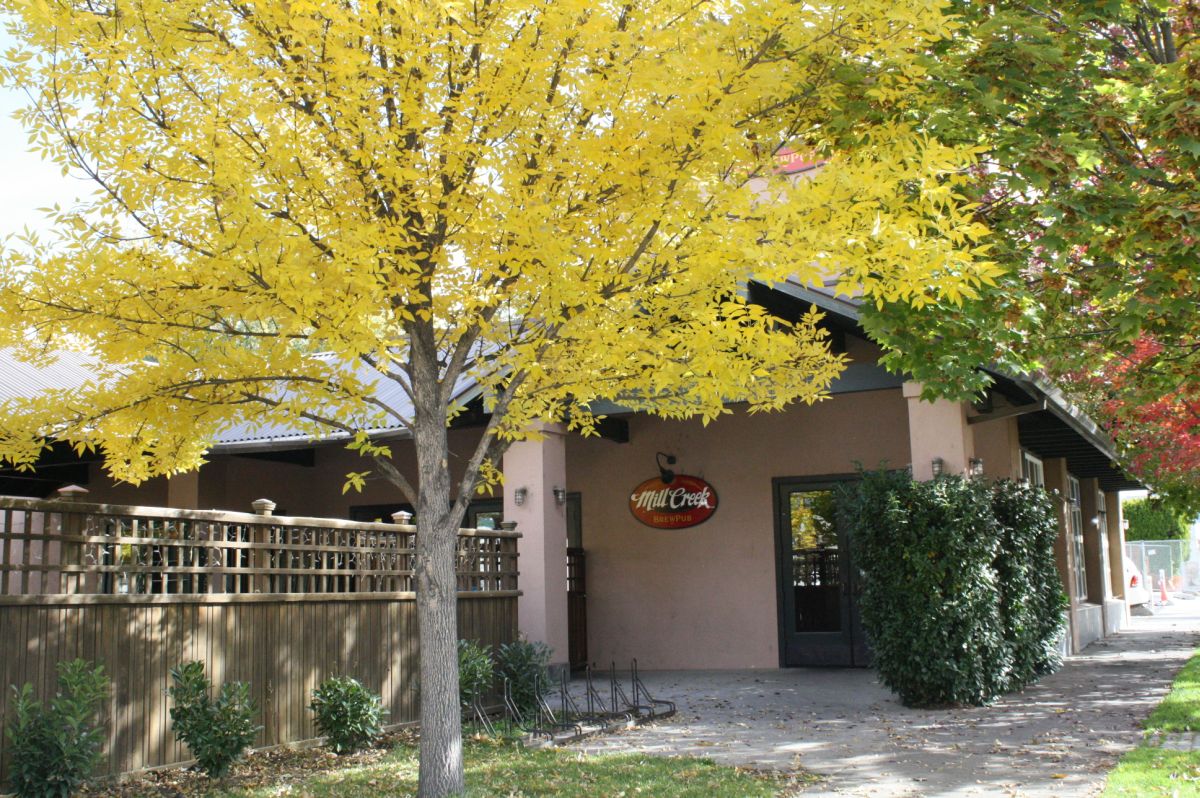