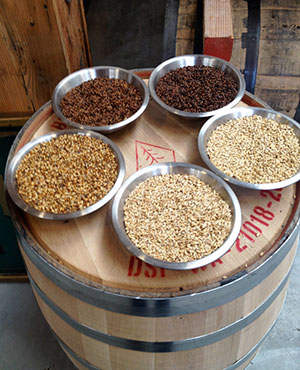 Here in the vast Pacific Northwest our prized hop crop seems to receive all of the press in this modern era. However, we also have a history of growing barley in the region and this is one of the more important ingredients in beer.

Stepping up to the plate to assist in the growth of the regions barley is Washington State University. WSU is using traditional breeding techniques as their scientists help develop barley varieties that are in more demand in making malted barley, the backbone of beer and whiskey.

In the clip below, WSU’s College of Agriculture, Human & Natural Resource Science goes in depth on what the region has to offer when it comes to barley production with interviews with key players in its growth.

Both Charles Finkel of The Pike Brewing Company and Emerson Lamb of Westland Distillery are excited to get their hands on more locally grown, custom malted barley into their mash tuns. Both get very excited when discussing the possibilities for imparting local flavor in beer and whiskey with barley grown and malted in western Washington.

You can sense this level of excitement in the video clip when Finkel discusses his budding relationship with Wayne Carpenter from Skagit Valley Malting Company. Carpenter’s goal is to provide the brewing, distilling and baking industry with the grain that they so desire.

As a small distiller, Lamb has the flexibility to produce single batch, single varietal or even single farm whiskeys, and it’s important to him that his product reflects its place of origin.

“That’s why we’re really excited about locally grown and custom malted barley. We can be hyper-local with flavor,” he said.

Lamb is glad to find his own spirit of experimentation shared by plant breeders Stephen Jones and Brook Brouwer at the WSU Mount Vernon Research and Extension Center.