Call us brew socialists or communistic quaffers…heck, we’ve been even known to drink a pink beer or two. But, when it is all said and done, no matter your palate preferences, we should all be glad to live in Brewpublic. In Brewpublic, several tastes are welcomed, and infact, encouraged. For fun in lieu of the United States’ upcoming Presidential election, let’s look at what Brewpublic might look like if this was a Two-Party System. By Party, we are referring to choices, not a gathering around a keg or cooler filled with something libatious.

In a two-party system, bicameralist, or dichotomously divided beer world, we would only have two choices. Suppose, for arguments sake, the spectrum here of an obstensible right and left wing dichotomy ranged from light lagers to dark ales. In such a hypothetical system, the proportional representation of these choices would see just two beers’ attempts to include positions that will bring them a larger portion of drinkers (supposing this is a democratic beer loving society).

The qualities including flavor, body, color, and alcoholic strength of both parties include mostly middle-of-the-road type branding and tap selections, due to the desire to identify with a majority of drinkers, and this may contribute to some watering down or emboldening of a contending brand and its brewing practices.

For instance, a light lager might add some extra hops and malts to the kettle to appeal to the dark ale constituency, or inversely, a dark ale might devise a product less alcoholic with perhaps some Pilsener malts. This could potentially lead to a lower turnout at the pubs or beer stores, because a beer drinker’s palate is not being fully satiated. This somewhat chaotic and fluctuating system of brand alliances could very well serve to intensify confusion among patrons. 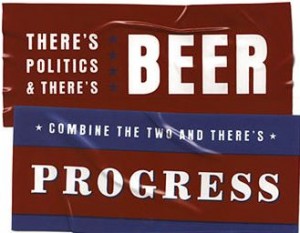 Some beer drinkers tend to have one quality in a brew that highly motivates them to decide – or even completely motivates them off the couch – which grog they will spend their money on. Because two dominant, opposing beer genres would perhaps lead customers to take opposite sides on many issues (ale vs lager, light vs dark, hoppy vs malty), these “one quality libators” will maybe automatically reach for the pint that represents their palate on the one level, even though they may not care for with most of the beer’s other qualities. These competing brands might often concentrate on popular taste issues (especially of those widely considered “flavorful” or ethical in the brewing process) to influence drinkers who are undecided or “swing sippers.” This issue could tend to be one that sparks a lot of emotion or simply lead the beer aficionado to lower his or her standards or ignore preferences.

After the ballots are cast and those who do vote are heard, there will still be smaller breweries who would suffer from under-representation. To the “James Madison beer drinker,” a multi-brew system or proportional non-partisan system could be more consensus-based, allowing for taste judgment to be passed less hastily and with more sincere debate on the issues.

If Brewpublic were a two-party system, perhaps we’d be stuck with a daily choice not too dissimilar from Michelob Ultra Amber. But, luckily this Brewpublic offers choice, celebrates diversity, and continues its pursuit of all things in favor of malts, yeast, and the pursuit of hoppiness. One nation under grog!