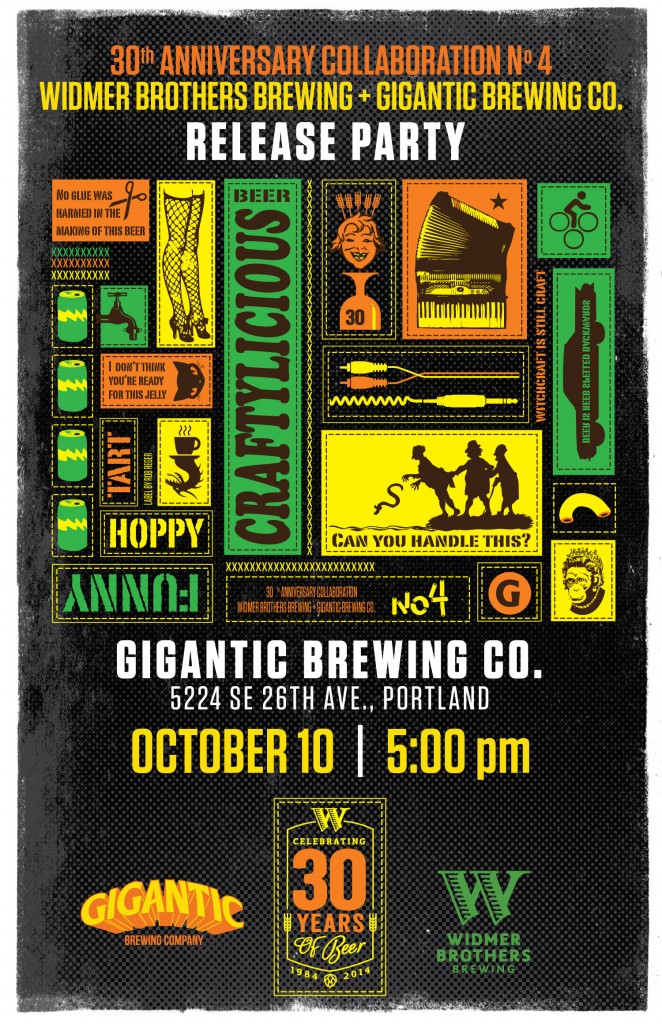 As Widmer Brothers Brewing continues to celebrate their 30th Anniversary they continue to crank out their collaborative beers brewed with some of the best up and coming breweries in the state. These collaborations began with Boneyard Beer earlier this year, then proceeded to Breakside Brewery and then onto most recently 10 Barrel Brewing. Now the current release and the fourth beer in this collaborative series is, Craftylicious, brewed with Gigantic Brewing.

Craftylicious Release Party will take place at Gigantic’s Taproom on Friday, October 10th beginning at 5:00pm. At the release party expect ample amounts of Craftylicious, a partial kettle-soured golden ale and the latest beer in Widmer Brothers’ 30th Anniversary Collaboration Series to be available along with many other Gigantic beers.

“I’ve known Ben and Van at Gigantic for a long time, and both of these guys have contributed to the Portland beer community in a big way,” said Ben Dobler, innovation brewer at Widmer Brothers Brewing. “They always manage to brew some really interesting, innovative beers, and we were excited to collaborate with them for the 30th Anniversary Collaboration Series. The idea for this beer came to us when we started talking about ‘craft vs. crafty.’ Given that Gigantic is a craft brewery by any standard, yet the guys at Gigantic proclaim that they’re ‘the world’s most crafty brewery,’ and Widmer Brothers has been labeled ‘crafty,” we thought we would have some fun with those definitions and labels with Craftylicious.”