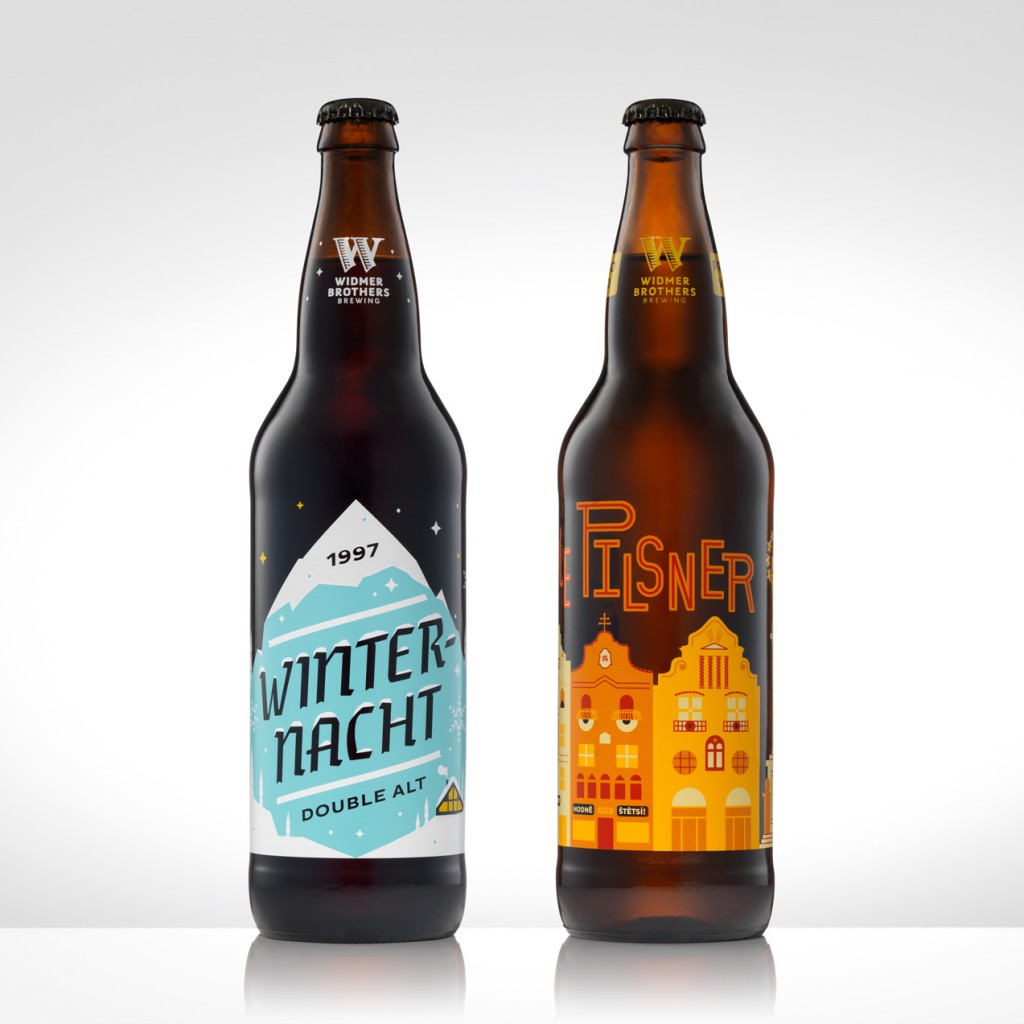 Widmer Brothers staggering 30 Beers For 30 Years Series has two new releases hitting store shelves and taps throughout the Portland market beginning today. Winternacht and Pilsner are beers that were originally brewed in 1997 and 1998. These two beers represent important times in the brewery’s 30-year history.

Winternacht is the brewery’s longtime winter seasonal – originally introduced in 1997 and retired in 2004 – and is brewed in the fashion of a Sticke Alt, which is a stronger, darker version of the traditional Altbier. The beer is a classic winter warmer, with a full, malty body and pronounced hop characteristics.

Pilsner, originally introduced in 1998, is what the Widmer Brothers brewing team calls its first “true” lager on any large scale. Pilsner marks the first time that Widmer Brothers moved away from its house Hefeweizen yeast and pitched a standard Czech Pilsner lager yeast. The result is a traditional Czech-style Pilsner with a crisp malt body and mild hop bitterness.

“We have had a lot of fun releasing important beers in our history with the 30 Beers For 30 Years Series, and these two truly represent brewery milestones,” said Kurt Widmer. “In 1997 when we released Winternacht, we had no idea how important having a great winter seasonal would become. Now it is a must-have staple in every brewery’s line-up. Pilsner is very dear to us because it was our first large-scale lager release and we thought it was excellent. It’s another one of those beers that was slightly ahead of its time, as Pilsner is a hot style right now in the American craft beer industry.”

As part of the 30 Beers for 30 Years Series, both beers are brewed to their exact recipe and specifications from their original year of release at Widmer Brothers’ 10-barrel pilot brewery. The series is the brewery’s most ambitious effort to date and one of the most elaborate series of beer releases from a brewery in the United States.

Like all beers in the 30 Beers for 30 Years Series, an extremely limited quantity of each beer was brewed and packaged with unique label art from 30 different local artists and designers. Jen Wick of Jen Wick Studios designed the Winternacht label, and Jason Sturgill designed the Pilsner label. To see all the labels and learn more about the artists and the inspiration for their designs visit www.30beersfor30years.com.

Winternacht – 1997
Brewed in the fashion of Sticke Alt – a strong version of Altbier – this is a classic winter warmer, with both malty and hoppy characteristics, and is one of our most memorable beers among our brewing team. 7.0% ABV 23 IBU

Pilsner – 1998
Our first “true” lager on any large scale. This beer marks the first time we moved away from our house Hefeweizen yeast and pitched a standard Czech Pilsner lager yeast, resulting in a traditional pilsner profile. Sometimes tradition prevails, and in this case, it marked an important milestone with our first lager. 5.0% ABV 30 IBU