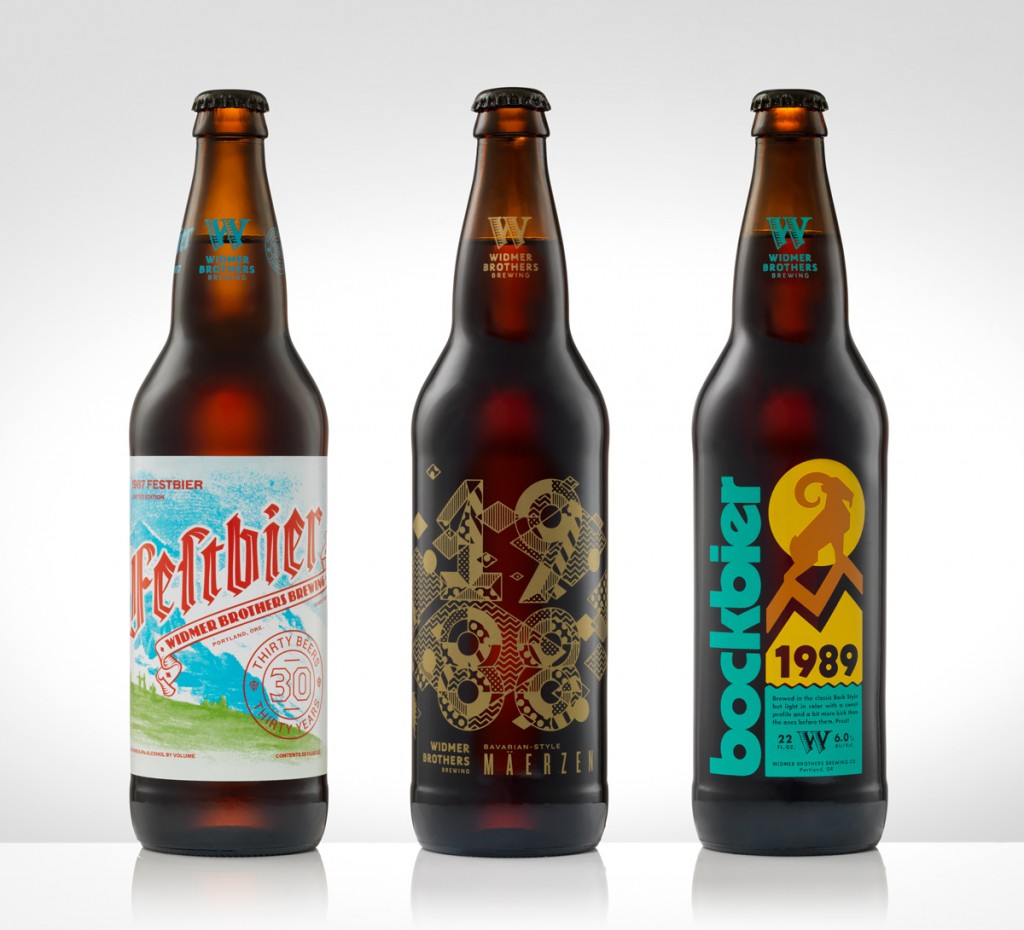 As Widmer Brothers continues to celebrate their 30th Anniversary throughout 2014, their next three releases in their 30 Beers For 30 Years series will be available beginning today in the Portland metro area. The brewery is revisiting its German roots with three beers originally released in the late 1980’s. Today marks the re-release of Festbier (1987), Mäerzen (1988), and Bockbier (1989).

One thing that makes these 3oth Anniversary beers special is that the labels for the beers are created by local Portland artists. This round of three releases includes label work from Ethan Allen Smith of Peetkegler created the Festbier label, Adam R. Garcia of The Pressure created the Mäerzen label, and Andy Morris of Chandelarrow created the Bock label.

These are the fourth, fifth, and sixth beers in the 30 Beers for 30 Years Series, the brewery’s most ambitious effort to date and one of the most elaborate series of beer releases from a brewery in the United States. The release of Festbier, Mäerzen, and Bockbier follows the first three beers in the series: Altbier, Weizenbier, and Hefeweizen, which were released in early April to coincide with the brewery’s anniversary date.

In Portland in the late-eighties, German style lagers and ales were uncommon, especially those brewed by American craft brewers. Kurt and Rob Widmer’s German roots, and Kurt’s time in Germany, inspired the Brothers to brew their interpretations of these classic Bavarian styles. Widmer Brothers became one of the first breweries in the country to focus nearly exclusively on German-inspired beers. The first six beers in the 30 Beers for 30 Years Series were among the first and most memorable beers brewed by the brewery in its early years.

“2014 is a perfect time to re-release these beers,” said Rob Widmer, co-founder of Widmer Brothers Brewing. “There’s a definite thirst for German-style craft beers today, particularly here in Portland where German styles and German-inspired craft breweries are on the rise. We like to think that we were on the forefront of that trend 30 years ago, and it’s great to see beer drinkers showing enthusiasm and appreciation for styles that helped us build our brewery.”

All three beers – Festbier, Mäerzen, and Bockbier – will be available in the Portland area in extremely limited quantities. Each beer was brewed as a small batch at the Widmer Brothers 10-barrel pilot brewery to the original specifications from its year of origination and release in the 80s.

Each release in the 30 Beers for 30 Years Series features label artwork by Portland-based artists. Ethan Allen Smith of Peetkegler, Adam R. Garcia of The Pressure, and Andy Morris of Chandelarrow, created the Festbier, Mäerzen, and Bock labels, respectively. To see all three labels and to find out more information on the artists, please visit www.30beersfor30years.com.

Thirty cases of each release, packaged in 22-ounce bottles, will be available only in the Portland market. Limited draught beer will be available in select markets. Interested fans will be able to try all three original versions at the newly remodeled Widmer Brothers Pub beginning today, May 5, and as supply lasts.

1988 Mäerzen
The tradition of Bavarian Mäerzen beers is a storied one: these beers were always brewed in March, taking advantage of the last opportunity to harvest ice from the lakes, which was used to lager them in the caves. The beers were historically cold-fermented underground, and when the ice melted, were uncovered and enjoyed. This is Kurt and Rob’s interpretation of the style. 5.5% ABV, 20 IBU

1989 Bockbier
Most American beer drinkers associate Bock beers with terms like “bottom of the barrel” and “dark beer.” Kurt and Rob set out to change people’s opinion of Bock beer, and brewed one that was light in color with a sweet profile and a bit more kick than the ones before them. 6.6% ABV, 30 IBU