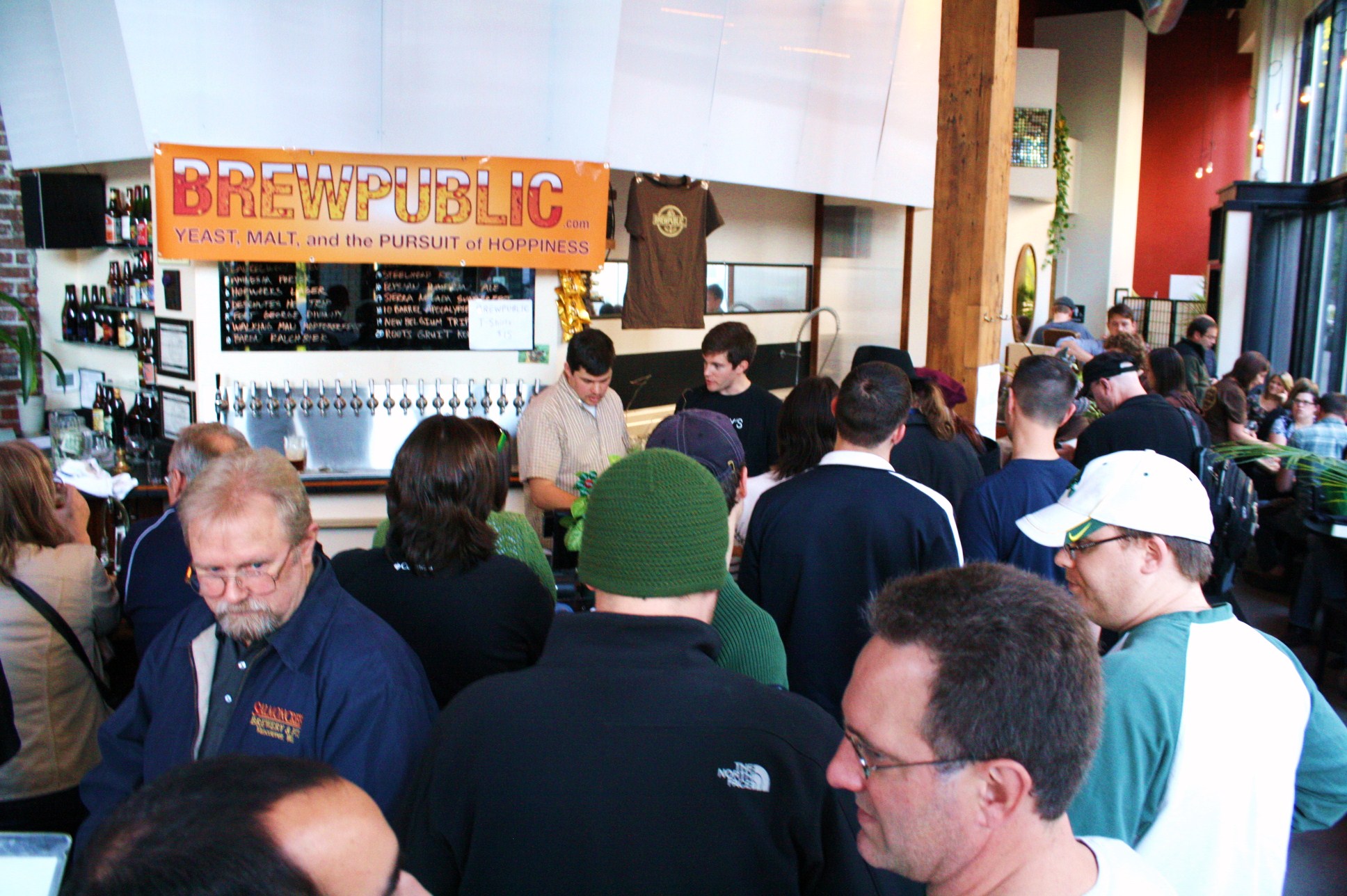 Holy freakin’ crap! You know it was a wild weekend when we’re just getting Saturday’s recap up on a Tuesday. Pardon the delay. Myself, like many, have felt like Prometheus for most of the weekend.

And ready-witted Prometheus he bound with inextricable bonds, cruel chains, and drove a shaft through his middle, and set on him a long-winged eagle, which used to eat his immortal liver; but by night the liver grew as much again every day as the long-winged bird devoured in the whole day.” –Theogony

After a hoopla and hoorah at Saraveza on Friday night, Margaret and I woke up the next morning and headed over to Aaron and Monica’s wedding at McMenamin’s Kennedy School. For one of the first time in my life I was at a brewery and not partaking in the beer (and it was free beer mind you!). No, we knew that there was a big hill to climb. This zenith came to be known as Brewpublic’s KillerBeerFest at Bailey’s Taproom. Hence, I stuck to the obligatory Arnold Palmers and scooted early to barely make it to Bailey’s at 4PM.

Bailey’s opened a tad early and by the time we arrived, our e

vent was sheer craziness. A civilized mosh pit of sorts as the real heads had arrived in impressive proportions. Bailey’s owner/head barkeep Geoff Phillips and Michael O’Connor were on the front lines banging out sample trays as fast as earthly possible while the thirsty maintained a steady line to the door for about three hours. 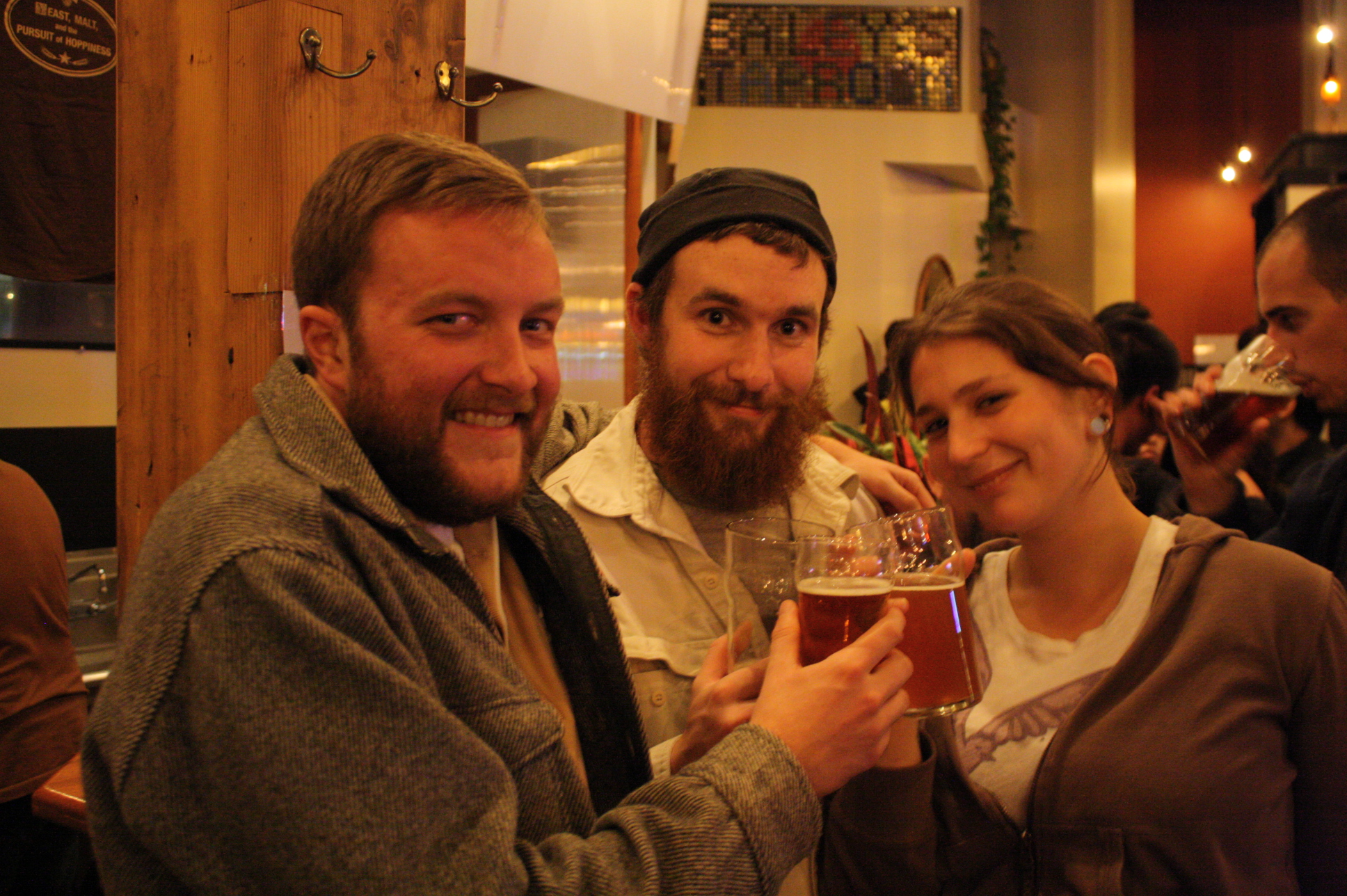 As anticipated, the Cascade 5-Thread blend was the first to kick as the barrage of quaffer assaulted the Bailey’s serving crew. Our friends Nick and Scott aided in the seemingly never ending line of beer pushing by helping

with behind the scenes duties. I haven’t spoken to anyone at Bailey’s since the event, and quite frankly I hope they don’t hate me for turning their Saturday into a clusterf—, but I would gander that this might be the busiest night in their two years of being open. We’ve been hyping the beers for sometime on our “events” page so you probably know the line-up, but I think it is necessary to list a few of my favorites. And, judging from the word around the pub, others seemed to really like them, too. Along with the highly anticipated Cascade 5 Thread, here’s my vote for top favorites:

Barley Brown’s Wet Wild Wet Hop Strong Pale: A back-end hops citrus and floral dream. As expected coming from one of Oregon’s best breweries, this beer was no exception. Fans of Russian River and Green Flash IPAs could really appreciate this gem of a beer.

BJs Enfant Terrible: Count on Vasilios Gletsos to concoct a bomb brew. This sour rivaled the hype beer of the night (Cascase’s 5 Thread). Even some folks who attest to not liking sour beers said they loved this delicious and well-aged 2007 barrel.

Upright Dry Hop Fresh Hop of Bel-Air: On the cask this beer unveiled a complexity and floral component unlike any other fresh hop beers we’ve had this year (or ever for that matter). Brewer and friend Alex Ganum really knows how to take chances with beers that always seem to come out favorably. If this beer hasn’t kicked yet, make sure to get over to Bailey’s and get some.

Lucky Lab Irish Red on bourbon: Lucky Lab flexed their guns this weekend by delivering the robust Pavlov Imp Stout on Friday at Saraveza and this gritty, creamy specialty. Hints of vanilla, fruit and spicy hops gave this brew a one-of-a-kind delicious attitude that we were hoping for from them.

Oakshire Collaborative Evil: The only repeat beer of the two night, the beer geek specialty rung in at a fat 10% ABV but was deceptively smooth with a subtle spice profile and a unique yeast-malt play that kept the masses from rioting too hard.

Caldera Rose Pedal Imperial Golden Ale: We’d had this before and loved it before, but it seemed to shine even brighter here on the big stage amongst other big dog brews. Jim Mills quest to produce innovative recipes gives him mad points in our books. The feed back we received about this beer confirmed others’ similar response. Light without being thin and with a steady rush of a flowery bouquet to accompany a bready malt accent, this beer also had a generous helping of hops to provide both complexity and drinkability.

Seven Brides Drunkel: Named for the drunken uncles found on wedding days, we were honored to have the Seven Brides crew with us for two straight evenings. This big strong ale was dark, chewy and weighed in at an imposing ABV. Brewed specially for KBF, Drunkel was the kind of beer to pair with a nice cigar or a deep, dark chocolate. Mmmm.

I would like to keep typing about all of the wonderful beers that were present at the event, but it just makes my mouth water and my liver throb. Thank you to all who came, provided beer, and supported Bailey’s and Brewpublic. Prost!